70 Years of the UN: Critical Successes & Dismal Failures in the Era of the Antichrist 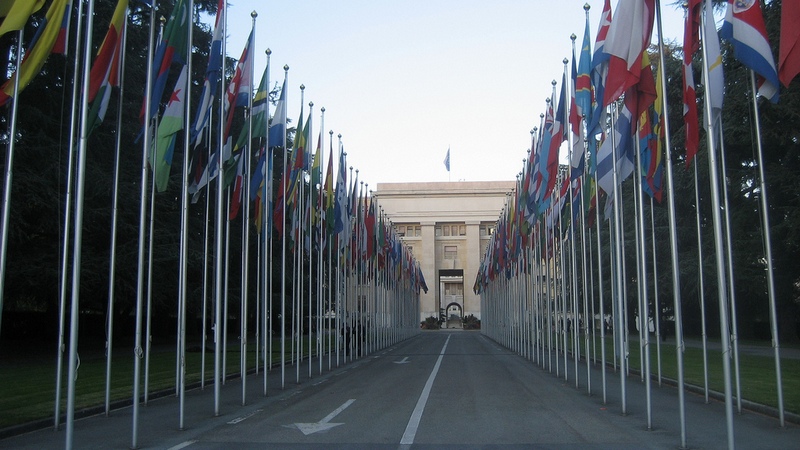 When Lucifer entered the hearts of Adolf Hitler, Mussolini and Hirobito from 1939-1945, the world witnessed the most harrowing destruction of human beings in their millions and properties worth zillions of dollars perished.

I had first-hand experience with these brutalities in 1962, when I flew into Moscow from Paris, France. I saw amputees, deformed men and women, who suffered as a result of the 2nd World war.

As a student of International law and diplomacy at the University of Kiev ( 1964-1968), I visited Barbiyan, Auschwitz , Dachau, the Warsaw ghetto, Buchenwald and I felt the chill of man’s inhumanity to man I still do.

I have lived with the memories of the extermination of Jews in Poland Warsaw saw war was no more. The work of the Luciferian hierarchy using it human agents in this universe of man, was horrendous. The World Peace Movement gathered the anti-Hitler coalition in 1945 to inaugurate the United Nations Organization.

Learned jurists drew up the UN Charter, which has since guided international relations. Under the watch of able International lawyers and Diplomats like, Trevor Lee, Dag Hammersjold U Thant, Dr. Kurt Waldheirn, Peres De Cuellar, Professor Boutros Boutros Ghali, the UN had critical successes but did not do very well under Kofi Anan and Mr. Banki Moon, as a result of pressures from Super Powers in the last twenty years.

The various UN Declarations, Convention and Treaties were partially applied to international conflicts because the big powers introduced strategies that enfeebled the UN General Assembly, the Security Council and other UN agencies by settling up rival institution like G-20, G7, G8 etc. These have created confusion in the international system.

It is important to reaffirm the principles of International Law Concerning Friendly Relations and Cooperation amongst States in Accordance with the Charter of the United Nations.

Anyone who has closely followed the international legal development of the United Nations Organization will observe that in the last twenty years, most of these principles have not been meticulously observed.

There have been violations of these legal principles as a result of instability in the world geo-political order.

It has been very difficult to defined international responsibility of States. As a result, the United Nations has often failed to apply legal consequences where there are international wrongful acts that violate the purposes and the principles of the United Nations. The Security Council and the General Assembly have in some cases, overlooked developing crisis been enfeebled to take actions with respect to threats to the peace, breaches of the peace and acts of aggression.

As result of the discordance in the international political system, there have been reduced international economic and social cooperation and the Economic and Social Council of United Nations has contributed very little to social economic promotion of The World Economy.

The International Criminal Court has introduced confusion in the pursuit of the international legality.

African nations feel very strongly that the Court has targeted their leaders since other world leaders who violated international justice have not been punished.

This violates the principle of sovereign equality of States.

THE UNITED NATIONS CONVENTION ON CORRUPTION:

The United Nations has succeeded in bringing into public consciousness the evils of corruption and this can be recorded as its critical success.

The States Parties of this Convention,

Concerned about the seriousness of the problem and threats posed by corruption to the stability and security of societies, undermining the institutions and values of democracy, ethical values and justice and jeopardizing sustainable development and the rule of law,

Concerned also about the links between corruption and other forms of crime, in particular organized crime and economic crime, including money laundering.

Concerned further about cases of corruption that involve vast quantities of assets, which may constitute a substantial proportion of the resources of the States, and that threaten the political stability and sustainable development of those States, Convinced that corruption is no longer a local matter but a transnational phenomenon that affects all societies and economic development, making international cooperation to prevent and control it essential, Convinced also that a comprehensive and multidisciplinary approach is required to prevent and combat corruption effectively enjoined States to cooperation eradicate corruption.

Convinced further that the availability of technical assistance can play an important role in enhancing the ability of States, including by strengthening capacity and by institution-building to prevent and combat corruption effectively enjoined States to cooperate to eradicate corruption.

In the last twenty years, many States have intervened in the affairs of the Arab States. e.g Iraq, Libya and Syria, violating Article 2-4 of the United Nations Charter. Although the United Nations General Assembly Resolution clearly defined aggression elaborately, this has been disobeyed wantonly.

Article 1 Aggression is use of armed force by a State against the sovereignty, territorial integrity or political independence of another State, or in any other manner inconsistent with the Charter of the United Nations, as set out in this Definition.

Explanatory note: in this Definition the term “State’’:

ARTICLE 2 The use of armed force by a State in contravention of the Charter shall constitute prima facie evidence of an act of aggression although the Security Council may, in conformity with the Charter, conclude that a determination that an act of aggression has been committed would not be justified in the light of other relevant circumstances, including the fact that the acts concerned or their consequences are not of sufficient gravity. The Security Council has often failed to agree as to who the aggressor is as a result of geo-politics.

ARTICLE 3 Any of the following acts, regardless of a declaration of war, shall, subject to and in accordance with the provisions of Article 2, qualify as an act of aggression:

The United Nations Convention on Corruption expresses its purpose in Article 1-Statement of Purpose.

Article 3 Scope of Application in Chapter 2 Article 5. The Convention listed some preventive measures in its paragraphs.

Article 7 addresses the public sector participation in the fight against corruption.

Chapter 3 Discuses criminalization and law enforcement and explained in detail the mechanism for international cooperation which has so far worked very effectively between States members of United Nations. In Chapter 5 of the anti-corruption Convention raised issues of assets recovery this has not been very successful. This is because those States that openly condemn corruption aid and abet corruption by failing to disclose stolen monies hidden in their banks by corruption officials from other countries.

We urge all States to disclose the identities of “privileged thieves” and unpatriotic, elements, who use their banks to hide stolen national wealth.

African States must not offer ministerial appointments and high office to indefatigable mediocres, just because they are party men. They have obvious intellectual limitations.

As we have observed in Nigeria, such men turned the refined art of political discourse into Jankara rofo rofo fights pretending to love Nigeria more than everybody. We have seen through their tantrums and antics.

After a while, they will do the same things others they now condemn had done, Hypocrites!!! Their dogma in not well thought out. It does not flow from learnedness but from showmanship.

African States must appoint known experts in various fields and must not allow tribalism and inefficiency to becloud their progress. A round peg in a square hole cannot fit.