Now that I have finally seen Agbani Darego’s controversial chest baring picture, I can see what it was that irked and riled many Nigerians. While globalization has caught up with us, there are still some areas that have remained rooted in tradition. One of those areas I guess is women decency. Baring any wardrobe malfunction a la Janet Jackson, the Nigerian society expects the woman to cover up, not minding those female tong exhibitionists straddled on top of commercial motorcycles (Okadas) all over Nigeria’s city centres. You would think that they should consciously be aware that the half of their voluptuous backsides threatening to jump out of their trousers are causing major traffic jams and accidents as the men get distracted on the steering wheel, and to learn to pull tightly up while cruising on okada motorcycles, but it appears that that will be asking for too much.

For this reason also, lawmakers in Lagos state recently berated the Deputy Chief Whip of the House of Assembly, Hon. Adefunmilayo Tejuosho representing Mushin Constituency II, for turning up at the legislative chambers in a mini-shirt on a pair of body-hug trousers that gave out her figures and curves, but which the law makers considered ‘indecent and improper dressing’, contrary to house rules of national attire or formal continental dressing. 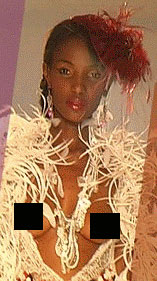 Anyway back to the former Miss World, I think that she and her people got this one wrong, the 2001 Miss World pageant winner ‘shocked’ Nigerians when she bared her chests at a charity fashion event in Lagos.

It was at the launch of the “Catwalk the World – Fashion for Food” global campaign which raised over $3 million for poor African children, organised by the United Nations World Food Programme, in conjunction with Health PR Ltd.

Some Nigerian mothers have called for her to be stripped of her Miss World title for debasing womanhood and serving as a bad role model to young women. Many other Nigerians have also called for her head on a platter; a good-spirited few though have rallied to her defence.

Since winning the Miss World title, it appears that Miss Darego has struggled to kick start a modeling career, despite her campaign for L’Oreal in 2003, unconfirmed rumours that she has had to work as an aur pair in South Africa and in Europe when the promised modeling contracts failed to materialize continues to make the rounds.

At a time like this, it is so easy to be swayed by emotions, but credit surely must still go to the young woman that captured the hearts of Nigerians and indeed the world back in 2001 with her innocence, beauty and intelligence. She helped put Nigeria somewhat on the world map, especially coming at the heels of the dark ages of the military, a period that painted a gloomy picture over everything associated with Nigeria.

But for the religious riots which broke out in the wake of the This Day article, Nigeria would have gained additional image mileage and earned further foreign revenues when Julia Morley and the whole Miss World crew came back into town for the 2002 edition.

It does appear though, that Agbani’s frontal exposure and act, which could easily make E! Entertainment’s fashion police slot has presented a good opportunity for modernists and traditionalists to slug it out. The traditionalists are now using one of Nigeria’s most infamous fashion moments to examine everything that has gone wrong with our society, calling into question the relevance of many television programmes and live events adapted from the western societies and now thrust upon Nigerians, notably Big Brother Nigeria, beauty pageants and other such reality programmes etc. Their wider argument is that these shows and platforms, unadulterated can influence the morals of the younger generation negatively.

The modernists however wish that the whole argument be placed on a global context, arguing that Nigeria being a member of the global community can no longer pick and choose, and should therefore allow individual choice, liberty and freedom to prevail.

It is indeed a no-win situation for either camps because of the validity of both arguments, but still sparing some thoughts for the young woman caught in the centre of the storm, I dare say that she can still pick up the pieces and move on with her life and career. Were she a Naomi Campbell, Oluchi Onweagba or Tyra Banks strutting her stuff on a Paris or London fashion runway, she would have passed with such provocation. The fashion and modeling world at the international level thrives on such semi-nude exposures, and as a model, you wouldn’t really expect to go places under cover, without exposing some of your private goods and wares to the fashion connoisseurs, or better still voyeurs.

Could Agbani have been poorly advised then? Probably. Maybe she choose the wrong event and also the wrong location to make her coming of age fashion statement. This may also indicate that on the surface Nigerians may falsely portray superficial trendy urban lifestyles, but are still deeply rooted in their tradition and culture, that in effect is saying that Nigeria may not yet be ready for such rude awakenings. A big lesson for marketers and sociologists you may say. 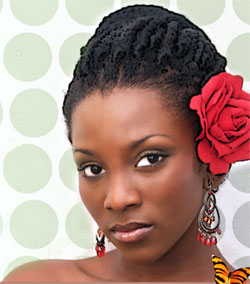 I still believe that Agbani Darego has the world at her feet, but she should start locally first. She should urgently look for Genevieve Nnaji’s phone number for some private lessons in both stardom and acting, that may be the single most important phone call of her life yet as she struggles to re-package and re-position her image, dignity and career.

Genevieve is our girl un-interrupted and represents the face of the Nigerian woman caught up in a rapidly globalizing world, and she does seem to be balancing the societal and professional expectations comfortably.

If the international modeling world have closed their doors to Miss Darego, well Nollywood is beckoning and the money is good too, plus the pride and dignity. if you ask Nigerian advertising and marketing executives which of the two girls has the most star power and attraction, capable of attracting faster returns on investments on advertising spend, you won’t be surprised if they mention Miss Nnaji. But still a Genevieve Nnaji and Agbani Darego flick, with Richard Mofe Damijo’s sartorial and smooth style thrown in as the villain or object of their desires will be a box office smash any day, only if Nollywood producers out there will pick the cue.