America Is Not Like Heaven – The Ramsey Nouah Interview 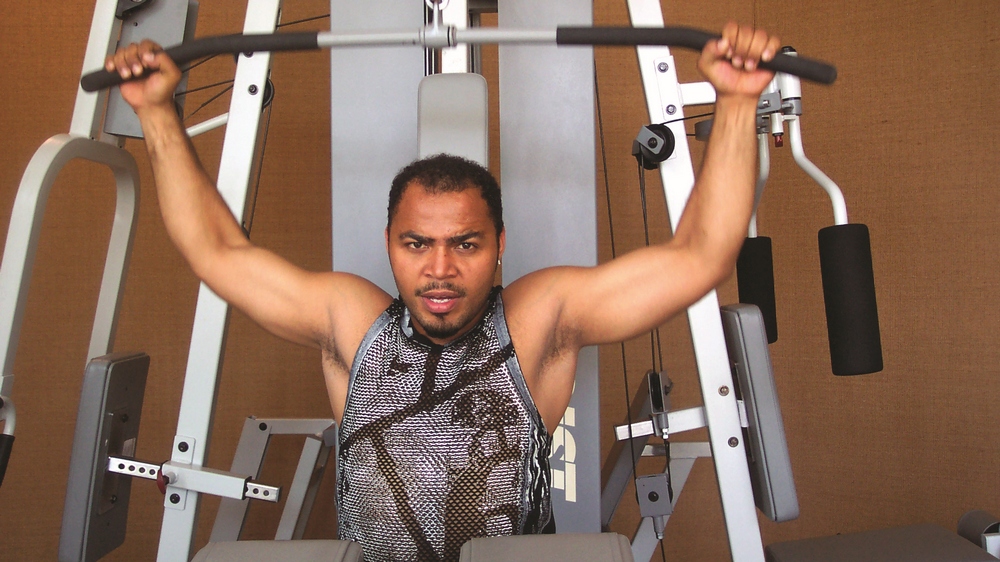 Ramsey Nouah’s face is better known around the black and African world than the face of the president of Nigeria. Born in July 1973, his face has sold many Nigerian home movies at home and abroad. Ladies melt with love for him, especially for his numerous “lover boy” roles in romantic movies.

This writer has chased him across three continents just to have this conversation. Ramsey was in the US at the inauguration of the Filmmakers Association of Nigeria, USA, and that gave Sola Osofisan an opportunity to sit him down. Now, let’s unwrap the Ramsey Nouah you have never seen.

Sola Osofisan: Mr. Nouah, I see you here in the gym. Do you work out regularly?

Ramsey Nouah: I try to.

R.N.: Oh yes. Absolutely. You have to like stay fit to be an actor actually. You must. In our profession, you can’t have (a) port belly or a paunch. It’s not good for the profession at all.

S.O.: The staying fit aspect of it… Do you need energy to be an actor? Why is staying fit important aside of the looks and the physical fitness part of it? Why is it important?

R.N.: As an actor, there are so many things you can be called to do. In Nigeria, we’re not big; the industry is not big enough to have a body double in doing some of your stunts and all that and some very dangerous parts. But if you’re fit, then you will be able to go through it. And then if you have the heart too of course.

S.O.: Just tell me one or two that you’ve done.

R.N.: I’ve done quite a few. I actually tried… Zach Orji directed that one. It was in Ghana. I jumped from a story building down. Then I tried to like save a woman from an oncoming car and it was pretty risky. It was pretty close. And then in “My Lover”, I was thrown in a 15ft deep well, artificially dug well. What else? Can’t remember… I’ve done so many stunts: jump, fall, break, bruises and stuff like that.

S.O.: Its all so risky. Do you think actors should be doing their own stunts?

S.O.: Is taking risk an outlook of yours to life? Do you take risks in things that you do?

S.O.: And do you fear anything?

S.O.: What roles is God playing in your life?

R.N.: The role that he made me what I am today and who I am and whom I will ever be till I die.

S.O.: Your name, Ramsey… You’re Ramsey Tokunbo Nouah, Jr. Where is the Tokunbo there from? In addition, explain your name.

R.N.: Yeah, Ramsey is my father’s name. He’s the senior. I’m the junior. That’s why you have Ramsey Nouah, Jr.

The Tokunbo was… Of course my grandmother gave it to me. That’s my mother’s mother. I adopted the name when I was having problems with Nigerian government because they needed – for me to get a passport, certain business registered and all that – they needed to know if I was a true Nigerian or a foreigner because of the name. So I had to adopt Tokunbo.

S.O.: But you know you look more foreigner than Nigerian.

S.O.: Has that worked in your favor?

R.N.: Em… I wouldn’t know. A lot of people believe that colored guys are highly highly endowed as in God… It’s a mixture of two races and it shows that they’re always very very healthy and strong. Even scientists said so. Now, it’s helped me, yes, in that aspect of life. I hardly ever fall sick. I don’t know, but I hardly ever fall ill.

S.O.: Has it helped you in your movie career? I mean the mixed race now…

S.O.: I really mean has it been useful. I don’t mean help in the actual sense of the word.

R.N.: (HESITANTLY). Maybe. Just maybe. As a light skinned fella, you sort of like cut across somehow very quickly amongst the black race, you know, in Nigeria. Because I’m light skinned, in everything people quickly get to notice me. I mean if I walked alongside most of my colleagues, I’d be picked out by fans from a distance (before) they will ever pick my other colleagues like Emeka Ike, Jim Iyke… Because they are dark you know. Because I’m light skinned, I’m walking along – ah, that’s Ramsey Nouah. They quickly know me. So, sometimes, it’s good. Sometimes it’s not.

S.O.: Have you ever felt like you’re in competition with some of the other big name actors in any way?

S.O.: Okay, maybe competition is for the heart of the ladies? (Laughter).

R.N.: Its just the same way they would like to have a chance to talk to Jim Iyke, Emeka Ike, RMD and the rest of them. We’re TV personalities. I don’t think there’s anything special to it particularly (smiling as the ladies around freak out) that they’re really interested in or something.

S.O.: He’s being very modest. (laughter). Ramsey, back to your name briefly, there are different spellings of it. Give us the real spelling of your last name.

S.O.: Good. Let’s wrap up this issue of the mixed race before moving on. Your mom is from where and your dad is from where?

R.N.: My mom is from Owo, Ondo State, Nigeria – and my father is Isreali.

S.O.: And you grew up in Nigeria or where?

R.N.: I grew up in Nigeria, on the streets of Nigeria.

S.O.: What streets specifically? Maybe we can go to that area to pick up the talents that you have…

R.N.: Ebute Meta for a start. That’s where I started. Then I moved on to Surulere.

S.O.: Surulere… I grew up in Surulere too. I never met you.

R.N.: I was inconspicuous at the time. (Laughter).

S.O.: You walked into this Ralph Nwadike soap opera and you just walked into the lap of stardom. And over the years you have grown as an actor as you got more experience. Tell us the story of your evolution from that soap opera – was it “Palace”?

S.O.: I saw that episode when you came in. I saw the beginning and I see you here today as a different person. Tell us the story of that evolution please.

R.N.: Alright. Em… I had this fan… I still have the fan. She looked at me and said… We get to talk and laugh a lot and Jill can crack all kinds of jokes. And then she looked at me and said “Ramsey, you’re just an actor”. She’s always saying that you know. Sometimes I go ahead and I tease her and I look at her and I laugh. She said I could act in one of these soaps in Nigeria. And I said “me, Ramsey? Why would I want to act in Nigeria? Abeg. If I was going to act at all, let me be in Hollywood, let me look at my idols at the time you know: Stallone, Schwarzennegger and the rest of them”.

She now said something that really motivated me, something that actually changed my point of view, which was “Ramsey, charity begins at home”. Now, that’s a very normal phrase and line. Apparently, it worked perfectly well for the scenario at the time and I looked at it and I said to myself, “that’s true. If you’re going to do something at all, you have to start from somewhere. You have to build it from somewhere”. Like Johnnie Walker says, “a journey of a thousand miles begins with a single step”.

I went over to see her again and said “this soap opera thing, let’s go”. Alright. We went and we did some few things and all that and that was in 19990. In 1991, she took me to Ralph Nwadike’s – then, it was Zeb Ejiro’s office somewhere in Oyekan Street, in Aguda. And then we walked in and there was this soap going on for “Fortunes” at the time. It wasn’t running. We we’re about shooting the pilot. And they said okay they wanted this role and I performed and Ralph Nwadike just screamed like “this is the guy I’m looking for. This is the guy I’ve been waiting for”. Well, I laughed.

S.O.: I can picture him saying that.

R.N.: And so that started my fame, my stardom, what I am and what I’ve become today. So we got into the soap. The soap… We shot a pilot in ’91 but the soap didn’t get to go on air until like ’93. It ran for just a year due to logistic problems and all that, and then it became defunct. And then, about two years thereafter came the advent of home video. And then I was in (some) home videos.

S.O.: Which was the very first one you did?

R.N.: Yeah. It was a fantastic story and movie.

S.O.: Over the years, you have exploded in terms of your acting capabilities, range and depth. How did this come to be? Is it that you have had more experience or you were able to dig deeper to become characters? What happened?

R.N.: Fortunately for us, we shoot movies like no man in the world, you know (laughing). We churn out movies and that gives you very quick adaptation to professionalism. I shot quite a number of movies and with each movie, I grew, became matured and got professional. Now, within all these times, I learnt along the way mannerisms, gestures, eye contact, lines, modulation and several other things that makes you a good actor and makes you deliver properly. That is how I have come to become what I am.

S.O.: I look at you and I feel envy. I mean you have everything: fame, you’re well paid so you have some fortune, you have a family you’re happy with, and you have all the girls. (General laughter). What does it feel like to have everything?