DreamWorks, the maker of The Prince of Egypt, Lion King, and Shrek has produced, another animated cultural tool, Madagascar. It is making waves in cinemas all over the world. The plot? According to the film’s official website, 4 animals – a lion (Alex), zebra(Marty), hippopotamus (Gloria), giraffe (Melman) and a group of penguins- having lived their entire life in “blissful captivity, complete with lavish meals and their own park views, decided to leave.” They are crated and shipped away by “well meaning humans who think they should be freed from the stress of New York life.”

25th September 2002, that spectacular mind, Edward Said passed on in New York. His reputation rests categorically on two magisterial books, Orientalism and Culture and Imperialism. In it, Said instrumentalized Foucault’s discourse of knowledge and power and used it to expose the deceitful dealings of western scholarship on the third world. There is a broad alliance between culture, scholarship and imperial physics. Before the West begins their slave merchandise or colonial robbery, or invasion, they start with scholarly misrepresentation of the natives. Many of the classics are not innocent. Reading them outside their origins and political contexts in the name of their aesthetic appeal provides a false or incomplete reading, or both. Unlike Chinua Achebe, Said urged reading them (pleasures of the text) but one has to be alert to their racial denigrations. And there is a subaltern angle to it.

When in a Hollywood movie you hear “I want to go back to the wild, to my roots.” When the root/wild turns out to be Africa, then everything said and depicted begins to assume new meanings and it is not ‘comic’ anymore. It is serious; more so when some months ago, there was this subtle yet invidious high standard racism in the exhibition of Africans and their culture side by side with animals in a Zoo in Germany. The choice of New York is not coincidental: it is the immigrant hub of the US. It is a place of unaccommodated “aliens”.

The sequence with which the film opens is a daydream by the zebra. During his acrobatics in the New York Central Park Zoo, the penguins – suggestive of the Chinese or mongoloids in general with their martial arts and their speech mannerism, shortness and penguin-like walk – are digging an escape tunnel to Antarctica with tablespoons! They emerge to confirm their location. ‘This is Manhattan’ the zebra tells them. But he is touched by the quest for their roots: “have you ever seen a penguin running free in New York City? Of course not. We don’t belong here. It is just not natural. It is a kind of …conspiracy.” He in turn sells the idea to his other inmates as a birthday wish. “This is absurd.” Then identity puzzle appears promptly: “I don’t even know whether I am black with white stripes or white with black stripes.” To underscore that others are being blinded by the vital illusions of New York, the flow of the film makes the lion invite the zebra to enjoy the constellation which he thinks is only peculiar to NY’s firmament. Wrong, the zebra says, it is a “helicopter”. And it turns about to be a helicopter which at that moment moves.

In the middle of the night while others are sleeping, the zebra tries out his dream. When others discover his absence, they go in search of him. In the process, they are all captured and shipped to… the curiously positioned reporter covering the scene: “they will be taken back to their natural habitat where they would live their lives in the freedom they desire” in Africa!

When they arrive Madagascar, the politics of yahoo takes over. This film calls to mind Jonathan Swift’s Gulliver’s Travels, Daniel Defoe’s Robinson Crusoe and Conrad’s Heart of Darkness; books that have played important role in the racial disparagement of natives whose progress and value are judged in terms of, and in comparison to, the West, so that they are always the Other, the conquerable, and the inferior. The animals from New York are made to be bigger. They are hailed as “New York giants”, “aliens from the seventh future”, “we New Yorkers are greater, tough”. When the expatriates animals ask to see the people, “there are no people here”, King Julian of Madagascar replies, “we bozos (dim witted fellows) are the people.” The message is poignant. Again the NY animals could not eat their food, their water and the lion is always hungry. In fact they are desperate to go back to their NY zoo while Julian is interested in courting the strong Alex in order to save them from the killer “Fousas” – internal jackals. Madagascar inventories the traces of western condescension and nostalgia for colonisation or occupation typical of Naipaulian literature. “With the New York giants…with Mr Alex protecting us, we will be safe and we will never have to worry about the dreaded fuosas… trespassing…ripping our limbs off.” Compare with: “now our mission is to protect Iraqis from Al Zarqawi and his terror network killing innocent civilians…” All colonial banditry is always justified as benevolence.

Unlike the Lion King, the 4 New Yorkers have no clear leader which emphasizes America’s republican orientation while the natives are obviously feudal and even disdain freedom of speech and equality of rights. Someone has to carry the king around on its head. When, Morris, the wise one, asks “what if Mr Alex is even worse than the fuosas?” He is immediately silenced by the crown; worst still, his contribution is erased from history!

In this cunningly contemptuous comedy with a colourfully rendered jungle, one cannot mistake the bold allusions to Africa as “a real zoo”, “forsaken island”, “the wild”, place where they have no people only animals, “its just a jungle out there”, “cesspool”, “that side stinks”, “hell”, place of hunger, where they eat themselves even an innocent birdie the Zebra rescues is devoured immediately by a crocodile. And in Africa too the zebra’s identity puzzle is solved: “you are black after all, 29 white strips and 30 black strips” while the lion begins his own identity crisis.

In the end, the penguins drive back the ship, snatched from the human sailors.

The film is a judgment on immigration, race, multiculturalism and the quest for home. Just like Kunta Kinte in Alex Haley’s Roots, obsessed with going back to the freedom of home. There are human beings in the movie, but those that are clamouring for their roots are of course, ANIMALS. The film opens with a day dreaming. “Do not interrupt me while I am dreaming”. And so the film pursues the dream to its logical end. Zebra the dreamer having got to the “wild”, his “roots”, had to say “let us go back to civilization”. The disenchanted dreamers in New York and other world metropolis are going to die in the seas floating around with no direction, as the finishing sequence suggests, because they have boarded a ship or subscribed to an idea whose gas has run out. Give the immigrant or precisely the Africans, bread plus captivity; they will always prefer it to their roots or freedom.

“The power to narrate, or to block other narratives from forming and emerging, is very important to culture and imperialism” Edward Said says. Any movie that tampers with Americans’ sense of superiority will not go far. That is why the movie The Day After Tomorrow that hints at the environmental disaster happening in New Orleans and the Gulf States, was severely criticised when it came out last year. How can Americans and White House officials beg to be refugees in a third world Mexico? 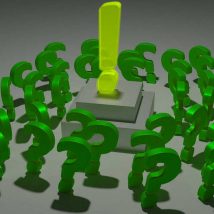 The Tragedy of Leadership and Followership in Nigeria: A Call for Total Destruction and Reconstruction of Ideas and Behaviour