Gani Fawehinmi: Between Impetuosity and Senility

Chief Gani Fawehinmi (SAN and SAM) is a name that rings a deafening bell not only in legal circles in Nigeria and the world over but in the consciousness of pro-democracy activists within and outside Nigeria. During the Babangida dictatorship Gani, the Senior Advocate of Nigeria and ‘Senior Advocate of the Masses’ took on the dictator head-on like other well-meaning Nigerians. The battle between good and evil which Gani and IBB represented (with the evil genuis representing evil of course) was a running one with the uncompromising Fawehinmi suffering harrasments, arrest and been thrown to Gashua Prison in Borno State where he languished in jail for months on end.

In the Abacha tyranny Gani still wore the ‘conscience of the nation’ toga tearing Abacha to pieces with his criticisms and pro-democracy activism. Gani was not afraid to sue the dictators even though much of his suits ended up in the judicial coolers. Dissatisfied with the way things were done politically in Nigeria Gani founded the National Conscience Party to try to wrestle power from the killers of dreams Nigerian but he soon found out that politics and law are worlds apart. Today the NCP is a political movement that exists only in the hearts and minds of followers, no serious political structure on the ground to battle say the PDP or other political factors and actors and actresses.

In terms of the law, its interpretation, publication and fireworks Gani is a one-man riot, an indefatigable defender of the law. And employing its instrumentality towards a better life for the people. Fawehinmi like no other senior lawyer in Nigeria has endured every thing thrown at him by succeeding dictators most of whom tried but failed to gag him. The name ‘Gani’ alone evoked justice and the ‘masses’ much less like late Tai Solarin and late Abami Eda, the African Shrine Afro-beat music legend Fela Kuti.

Gani has cheated death on more than one ocassion, his Anthony Village Chambers in Lagos had been attacked and bombed with his gateman killed all in the bid to intimidate Gani but he stands unruffled. Gani has had to give the struggle his life, giving vent to what he believes in without any exhibition of the fear complex. To so many Nigerians Gani Fawehinmi is a hero, a hero of both the law/justice and democracy.

Gani is a rare gem, an advocate of the law whose understanding of his calling is all-embracing and iconoclastic. Fawehinmi is a man of the law through and through and through his books he has been able to not only enrich the legal lexicon but enrich self by making millions for himself. One begrudges him not for he richly deserves whatever fortune his law environment could bring his way. 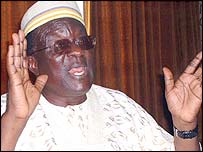 Gani is a worthy woman’s son, a worthy son of Yorubaland and a worthy son of Nigeria much like Prof. Wole Soyinka, Chinua Achebe and others. God bless the man and his generation that gave birth to this fire-brand one man legal moving train. A detribalised Nigerian of high intellect grounded masterfully in domain of legalism Gani has achieved what no other legal luminary has achieved in Nigeria with the exception of perhaps late Rotimi ‘Timi the law’ Williams.

But Gani’s vociferous critics charge him for being impetuous and going senile! That is not the major argument here for there’s no reason why these charges should hold as the major plank upon which to condemn or judge Gani’s blind aspiration towards a marked degeneration. There’s a brewing enough cause for worry in this regard.

You see folks, it bears emphasizing that Gani is, in the eyes of many, a victim of both impetuosity and ‘senility’. The degeneration of a hitherto great legal mind has struck us, his admirers right from college, as the final stage of a hero’s dramatic undoing of his heroism.

Gani acts more now as a confused SAM either in search of an AGF position in government (now that his endorsed presidential candidate, Rtd Gen. Buhari has failed again to withstand the PDP’s rigging machine) or seeking to eclipse unwittingly his years of tears and toil as one of Africa’s greatest ‘legal battle axes’.

The friendship existing between Gani and Gen. Buhari predates this dispensation when the latter and late Tunde Idiagbon were commanding the Nigerian Armed Forces as head of state and second-in-command after sacking the Shagari presidency. Though Buhari’s integrity, honesty of purpose and patriotism are not in doubt the fact that he rode to power through a coup d’etat is enough to distance him from the progressives; that is why his second shot at the presidency through the ANPP party generated some eyebrows with Prof. Soyinka intervening forcefully and cutting Buhari to size through reason and his past.

But Fawehinmi welcomed the Buhari and his campaign group to his Chambers endorsing him after a closed-door parley. Gani was rumoured then to be eyeing the plum position of Attorney General of the Federation and Minister of Justice should Buhari win and it apeared then that Buhari promised him that position upon victory.

Gani is not afraid to criticise or even stand alone in any decision of a court or national issue. He took on Olisa Agbakoba’s NBA on more than one ocassion disagreeing with the legal body’s positions even calling the leadership names. His altercations with the NBA exposed Gani as wanting to dominate the bar and bench seeing himself as the last bus stop of matters constitutional or legalistic. But Agbakoba (SAN), a pro-democracy gentleman refused to join issues with Gani prefering to concentrate on the struggle for deepening of democracy and the rule of law.

When Dariye, the immediate past thieving governor of Plateau state was wrongly impeached by a few members of the state house of assembly Gani stood alone as the only lawyer who saw reason with the assemblymen. When Ogbonnaya Onovo was denied appointment due him as the Acting Inspector General of Police Gani rose against the criteria for appointing Mike Okiro in Onovo’s stead questioning the marginalization of the Igbos and the Biafran connection.

His running battle in the press with Olu Onagoruwa, former AGF took another dimension with Onagoruwa sending to the ‘Guardian’ newspaper series of sharp strongly-worded rebuttals. Gani then holidaying in London had sought to minimise Onaguruwa’s achievement as AGF lampooning him for deviating from the Awoist principles and even touching on Onagoruwa’s healed illness.

His recent pronouncements against the Supreme Court verdict returning Governor Peter Obi to Awka government house that was never vacant in the first place and sacking the impostor Andy Uba raised concerns that Gani has effectively deviated from the course. According to the Senior Advocate the Supreme Court Justices erred in law by assuming jurisdiction over a matter the constitution assigned to the Election Petition Tribunal and finally the Appeal Court. To Gani the King Solomon of Nigerian judiciary: the widely-commended decision of the apex court Justices on the Obi-Tenure matter brought before them is “riddled with serious and fundamental constitutional error. It was a landmark judgment, but one without constitutional jurisdiction”.

Gani Fawehinmi has not only achieved greatness for himself but relevance in the legal scheme of things so any attempt to read meanings (of seeking fame or relevance) into his dissenting submission may be misplaced yet it follows that Gani is unwittingly fanning the dangerous embers of impeachment of Obi by the PDP-dominated state assembly. For Gani he meant well by ‘correctly’ interpretating the 1999 Constitution of the Republic as he deemed right and applicable but in this case he is damn wrong. He may be in order doing that as

a tax-paying law-abiding senior citizen but his objectives are open for question.

Obi’s case is not only unique but one that sought to clarify constitutional provision(s) which Iwu’s INEC were in breach of by organizing the April 14th ‘election’ into an office yet to be vacated. Philip Umeadi is a lawyer who is in charge of INEC’s legal department but he failed to point out this glaring abuse of the National Statute Book. Peter Obi’s case, from a layman’s point of view, was simply about how long the constitution stipulates a governor should stay in office from the day he/she took oath of office and allegiance.

For me therefore Gani has had his glorious days! He’s more or less now living his last days ingloriously. Or how else does one rationalise Gani’s recent hobby of beating about the bush against the popular tide and tidings? Or his constant new-found penchant for questioning those greater than him in the Nigerian legal clearing houses? Answers are welcome.