Let’s get one thing straight right away: The public declaration itself is not unheard of in our state. Immediate past governor, Abiola Ajimobi, publicly declared his assets in 2011 – a measly N3b when compared to Makinde’s, I might add. But it was a bold and unprecedented step at the time. Before Ajimobi, it was rare in our state; nay in our country, to have our depraved politicians declare publicly how much they were really worth. It’s indeed “un-Yoruba” to have everybody in town know where your wealth starts and where it ends.

Most Yoruba husbands don’t even want their wives to know their “last cards”! The belief is that once people know how much you are worth, they peg the respect they give you right at the level of your wealth. Others believe that once your enemies know the depth of your pocket, they will employ “agbana” to help burn off your money. But let me quickly remind you that there are some monies that “agbana” cannot deplete, no matter how potent. Forty-Eight billion naira invested in functioning and profitable firms is one such.

We must salute Makinde for having the intestinal fortitude…the “Integrity”…to declare his assets. Integrity? Arrgh! That word again. How come we didn’t drape Ajimobi in this Integrity robe in 2011? Is it because we are now measuring Makinde’s prompt declaration against President Buhari’s renegement; his infinite maladroitness on the issue? Buhari, the epitome of Integrity himself, turned out to be just another meretricious politician!

Makinde’s Strategy people are monitoring the social media and basking in the rave reviews their principal is receiving on the falsity that his declaration was first of its kind in our state. (Again, it is not the first time a governor in Oyo state would declare his assets.) That is fraudulent. That strips them of their Integrity toga. Any other time, they will be out their correcting wrong stories about them. They need to correct this one too.

Having said that, Makinde’s N48 billion asset is phenomenal, no doubt. Everybody knew he was a very rich man. They just didn’t know he was worth that much. And that’s really the story. The story is the size of his wealth. In beer parlors and social media chat groups across the state and indeed the country, people are in awe of the sheer hard work and ingenuity that earned him such stupendous wealth. And, of course, many others are in total disbelief.

Truth be told, while some of the skepticisms that greeted Makinde’s asset declaration announcement sounded reprehensible, others really appeared like they came from haters who had long been ensconced in unintellectual silos. Many even bordered on jealousy! Political rivals who didn’t have N10 million to their names yesterday were astounded. Forty-Eight billion naira! Billion! Who else has that kind of money in Oyo State? What is Makinde’s standing on Forbe’s list? Is he in Dangote and Otedola league? How come he has millions in US Dollars? How come he has money in South African Rand? Wait…does he have British Pounds and UAE Dirham too? Is it possible he has millions in Kiribati dollars or Korean Won?

How did he make his money? We know what Dangote is selling. We know what Otedola is selling. Some people obviously never heard of MACON. They just knew that Makinde used the title of Engineer (Engr.) until he became Governor; they didn’t know what he engineered.

Then the more important questions started coming out. Where are these assets located? Are they in this our Ibadan? How come we have never once come across them? Where, in Ibadan, could anybody “hide” assets worth N48 billion? Are Ikolaba, Dugbe, Alalubosa, Oluyole Estate, and Iyaganku areas, put together, even worth N48 billion? Did he make “anticipatory declaration”…meaning he anticipates he would acquire properties worth so much while in office (through corrupt means, of course) – the kind that was part of the charges against Bukola Saraki at the Code of Conduct Bureau?

Then the starry-eyed questions. So, Seyi (Ibadan people call the man by his first name as if they know him personally…which is not a bad thing. Let me see the babanla baba of that person that will call Ajimobi “Isiaka”.) was worth this much and he could only donate two boreholes worth less than N1 million to our village? How come I only got N10,000 to vote him into power when he had so much more to spare? These greedy rich people! How come he didn’t just take the “extra” N8 billion that is on top of the N40 billion and use it to help solve our LAUTECH problems once and for all?

Then the really smart questions came. Wait a minute…these are assets…what about the liabilities? The man has four or five companies. Rich people don’t run businesses with their personal monies. They use loan facilities. It was only after Azeez Arisekola died that we found out how much he owed banks. MKO Abiola too was heavily indebted. Aliko Dangote, we all know, is super-Super indebted. Or, at least, these people’s companies owe huge sums of money. And that is normal. It is when you don’t manufacture anything; don’t grow or harvest anything and don’t hire any good number of employees in a corporation that you founded and yet you are stupendously rich (like Bukola Saraki) that people start wondering about you. So, how much does Makinde owe in loans?

Then, hateful comments smacking of competing political hysterias started coming out too. So, he had this much money and yet allowed me to spend my miserly N300,000 on his campaign? How come he didn’t offer me just N1 billion to help win my House of Reps campaign? But they said he was owing his companies’ workers their salaries at one time; how can he be so rich and still owe salaries? These heartless people? Is this why he was able to “buy” Baba Ladoja? Did he “buy” Sharafadeen Alli and Femi Lanlehin too? But how come he wasn’t able to “buy” the Baba of Ogbomosho?

Listen…here’s what I think. Makinde was probably even richer than this in 2011 and 2015 when he lost elections at the primaries…the primaries where delegates vote based almost solely on how much money you give them. In fact, his loss of the 2015 PDP gubernatorial ticket to Senator Teslim Folarin (now in the APC) should tell you right there that money is not everything.

Sadly though, money is still very important in our politics. Although Makinde’s camp spun this asset declaration thing as fulfillment of campaign promise, potential 2023 PDP primary challengers see it as a not-so-veiled display of financial strength aimed at intimidating them out of contention. And they could be right. Nobody…repeat…nobody has Makinde’s kind of money in Oyo state politics. The questions are whether Makinde has enough financial liabilities to impose some spending constraints on him, and how much of his disposable wealth he is willing to throw into a furnace.

At any rate the public declaration of assets bell that he rang, which Ajimobi had rung in 2011, is one that we should not try to ever unring in Oyo State going forward. We want to know how much you are worth coming in. Makinde should go further and make this a condition for all political appointments in his cabinet. Maybe…and just maybe other states and Abuja will copy this truly pace-setting step. 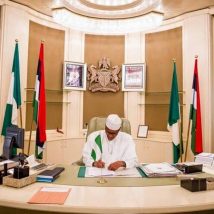