How Alamieyeseigha Embarrassed the Ijaw Nation

“It is difficult to comprehend the way my people love me. If something has not happened to you, you wouldn’t know. What went through my mind was that if half of my people could understand that (this) our leader is going through all this ordeal because of us, I would have been a fulfilled man”.

That was part of former governor Diepreye Alamieyeseigha’s effusive speech to supporters that thronged Government House, Yenagoa, , soon after he broke out of jail in . In his misguided, ecstatic jubilation, Alams (as they call him) blamed his travails on his arch enemies who were jealous of his accomplishment. He told the crowd that he was not oblivious of the extreme measures taken by his enemies, to include the hiring of voodoo specialists, in order to derail his “good” government. Virtually everybody in the crowd cheered on. Whether it was the fact that they were opportune to enter the State House for the first time (the gates were thrown wide open for all and sundry), or the fact that they were in the presence of the governor, a whole slimmed down, tummy tucked Alams that excited them, one did not know. But they wallowed in their extreme ignorance as they celebrated the return of their prodigal son. 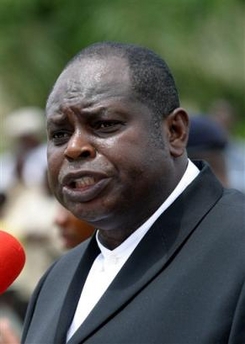 Alams rode into Yenagoa in a black Sports Utility Vehicle (SUV), making sure to roll down his window so that the doubting Bayelsans would know for sure that he was back in town. Of course, the poor people besieged his small convoy, which quickly became a long motorcade, with okada motorcyclists joining in and hundreds of people on foot wading through ponds, creeks and rivers. All roads led to Government House. His deputy, Goodluck Jonathan (now VP), who was then Acting Governor, did not know what to do. He sheepishly went along with the charade, smiling for the cell phone cameras, hugging the thieves in the crowd and shaking the looting hands of many of Alams friends.

A couple of days earlier, Alams had reportedly disguised himself in a woman’s attire (what a beast-ful, sorry, beautiful woman he must have looked) and sneaked past the London Metropolitan Police who must have relaxed their security, thinking that an august guest like Alams would not attempt such a crude escape. But our crook took a train through the British Channel into , from where he boarded a plane to . From , he took a boat to Amassoma, his hometown, and, like a thief and fugitive that he was, crept into his house at 2.00a.m.

The Economic and Financial Crimes Commission (EFCC) was aghast. Here was a man they could not arrest because he enjoyed constitutional immunity from prosecution while in office and they were happy that the police was going to tuck him away for some time. Now, here was the same man back in town in fanfare, rubbing his ill-gotten wealth on their nose again. Nuhu Ribadu, head of the Commission embarked on a subterranean attempt to undermine the influence of Alams in Bayelsa and get him duly impeached. But little did Ribadu know that N1 million could go a long way in buying the birth rights of many Bayelsa legislators. Early in his reign, Alams had approved a N1 million Constituency Development Fund (CDF) for each member of the Legislature. No member was therefore willing to bite the thieving fingers that fed him, especially since Ribadu was not willing to match Alams’ generosity. If you want to walk on a soft ground, the Yorubas say, you better wet the ground ahead of you.

To impeach Alams, Ribadu had to cart the legislators away to where they were sequestered and maximum pressure, to include outright blackmail, was mounted on them. On impeachment day, the legislators were bussed to Yenagoa, with the Assembly premises barricaded by stern-looking, ready-to-kill police officers. It was reminiscent of a military coup in progress. And so, Alams’ disgraceful exit from power was concluded and he was arrested and flown to .

His Ijaw people were beside themselves. What a travesty, they cried. This was a calculated attempt to rubbish the good image of the Ijaw Nation. Why was their son dragged through the international and national mud of corruption? Was he the only thief in town?

And because my Ijaw friends displayed such angst, I was beside myself! The Yorubas, again, ask you to pay attention to your child who is not in the laundry business, but brings home all kinds of clothes every day. If you press him hard enough, you will discover that he is stealing those clothes.

Alams did not live on the streets or in a shelter before becoming governor. He owned a couple of houses. But in the short time since he took over the mantle of governance in Bayelsa, Alams bought the in , supposedly in the name of , but actually in his own name. He bought the properties at 10, Oguda Close, and 18, , both in Maitama, . Alams continued his blind stealing spree as he acquired the property on Plot 26, Dalhatu Close, Abacha Estate, Ikoyi, (Abacha Estate? What an irony! A thief stealing on a thief’s Estate). He also bought the house at No 1, , Off Allen Avenue, Ikeja, . Still staying in Lagos, he bought 4A, Ilu Drive, Ikoyi, As if this man had never seen money in his life, he bought the property at No 20, Obagi Street, Diobu, Port Harcourt. Not satisfied with one or two houses in Nigeria, he took the Bayelsa people’s money to Britain and gobbled up properties at 247, Water Gardens, W2 2DG, 14, Mapesbury Road, NW2 4JB, 202, Jubilee Heights, Shootuphill, NW2 3UQ, and 68-70 Regent Park – all in and around London.