Lamidi Adedibu And The Ibadan Monarch

That Chief Lamidi Adedibu, PDP strongman of , excused himself from the coronation ceremony of Oba Samuel Odulana as the 40th Olubadan of Ibadanland did not come as a big surprise to many people. In recent time, the relationship between the monarch of the West Africa’s largest city and the strongman of politics is anything but cordial. Since the then Olubadan-elect directed all high Chiefs including Adedibu to choose between politics and their chieftaincy titles, observers have been looking forward to the kind of scenario that played itself out on Friday, August 17, 2007. 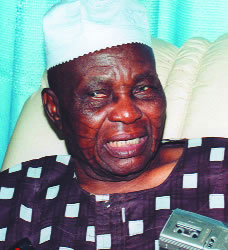 From all indications, Adedibu’s absence at the ceremony might be (God forbid) an indication that the battle line has finally been drawn between the Ekarun of Ibadanland and the royal father. Regardless of any pretentious posture by the self-acclaimed Oyo state political leader at the moment, there is no love lost between him and the Olubadan.

Although, Adedibu supposedly accepted the monarch’s pronouncement by saying he dares not cross path with Oba Odugade 1, event unfolding in pointedly shows the sword might just waiting to be drawn from its sheath. As it is, the probability of a non-confrontation between the two elders is zero. This assumption is reinforced with the reported statement credited to Adedibu indicating that he decided to stay away from the coronation to avoid unpleasant incident that can occur, and this might be attributed to his influence on the politics of in general.

Oba Odulana has given hints about his non-tolerant for politics of bitterness among his subjects especially high Chiefs as soon as he was announced as the next ruler of Ibadanland. Without hiding his disdain for the variety of politics as played by Adedibu, he admonished those he called the architect of political violence in the ancient town. From then on, nobody needed a soothsayer to know the accusing finger is being pointed at Adedibu and his army of thugs. It is on this premise that analysts have been focusing attention on when the real verbal war begins.

Suffice to say that having attained the position of a political god-father for many politicians in including Governor Alao-Akala, Adedibu will find it almost impossible to say goodbye to politics just like that. Even then, the law of the land does not say so, and it amounts to disfranchise of a citizen if his or her participation in the politics of the country is trampled upon as the directive from the palace indicates.

Constitutionally, Nigerian traditional institution of which Olubadan is a member has no authority of any kind on its subjects. Whatever respect accorded royal fathers is due to our traditional beliefs and practice. No Nigerian is duty bound by law to be subjected to any royal father’s say so, since the rule of law takes precedent over pronouncements from any quarter outside the constitutional provisions. It is therefore impossible for Oba Odulana to literally enforce his political ban on titled Ibadan Chiefs.

Adedibu’s antecedent can be traced back to civilian regimes before Alao-Akala’s, when he had (and still has) vice-grip on Oyo state’s chief executives. Till date, his words carry enormous weight within corridors of power in the state, and he’s enjoying the financial rewards to the fullest. For the Oloosa Molete, to lose all those largesse that are regularly showered on him in his capacity as a political kingmaker, will naturally not go down well with him, his initial public acceptance of Olubadan’s directive notwithstanding.

Having made his point, it is not too late if the Olubadan and his Ekarun can meet privately and sort out their differences for the sake of peace and tranquility in Ibadanland in particular, and Oyo State in general. Their impending confrontation is akin to the proverbial grass that suffers when two elephants fight. The ordinary people of Ibadanland potentially will be the great losers in the event of full-scale atrocities between the two elderly persons.

Sobowale is a Nigerian-American, living in the Bronx, New York City.

Sobowale is a Nigerian-American, living in the Bronx, New York City.