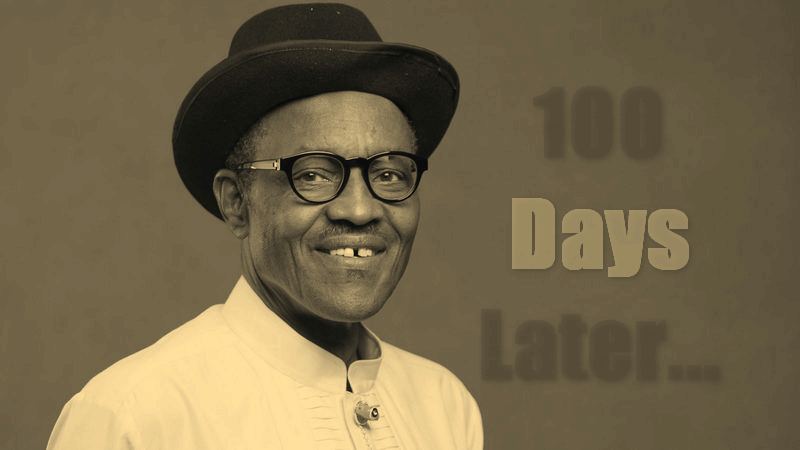 Saturday, September 5, was exactly 100 days since Muhammadu Buhari took the oath of office as President. His four-year term has 1,461 days and 100 days are only 6.8 per cent of it.

Though it has almost become a global convention to assess the achievements of an administration, particularly in a democracy, in its first 100 days, nobody really expects any fundamental accomplishment in so short a time.

What is indisputable, however, is that 100 days is long enough to lay the foundation of an administration and sketch policy.

So, while it may be ‘morning yet on creation day’, there are certain milestones that ought to be achieved. These milestones say a lot about the preparedness of a new regime to face the challenges of governance.

For instance, in an interview in Sunday Vanguard on August 30, Professor ABC Nwosu, former Minister of Health, used former President Olusegun Obasanjo to buttress what it means to be prepared for governance.

He recalled that when “Obasanjo appointed me on May 29, 1999 [and] I went to see him that evening after his having been sworn in, he gave me two draft bills – one on the NDDC and the other on the ICPC. He had them ready before day one.

“Both institutions were new concepts but they have endured till today. This is the difference between success and failure in governance.”

It is interesting to note that rather than telling us which direction the government is headed, chieftains of the ruling All Progressives Congress (APC) are disclaiming the promises they made in the heat of electioneering just because of the threshold of 100 days.

While denying that Buhari ever promised to publicly declare his assets, his Special Adviser on Media and Publicity, Femi Adesina, said it was the APC that made the promise during the campaign.

“You need to get his words right. Go and check all that the president said during the campaign. In no place would you see it attributed to him as a person.

“But then there is a document by his party, the APC, saying he would declare publicly. So, we need to get that right; it was a declaration by his party.

“The law requires public officers to declare their assets and he has done that,” Adesina said in a recent interview.

The document Adesina was disclaiming is “My Covenant With Nigerians”, which Buhari personally signed.

In the concluding paragraphs of the introductory note, Buhari wrote: “I know, however, that what we require to revamp our economy and rebuild our country is our ability to galvanise all our citizens to believe once again in their government, in their country and especially, to believe in themselves.

“This can only happen if we are able to rebuild the trust and belief that our people used to have in government, and indeed, in our nation. The leadership that I will provide will be built on this critical awareness.

“This Covenant is to outline my agenda for Nigeria and provide a bird’s eye view of how we intend to bring about the change that our country needs and deserves.

“This covenant is derived from the manifesto of my party, the All Progressives Congress (APC). It, however, represents my pledge to you all when I become your president.”

On corruption and governance, Buhari said: “No matter how vast our resources, if they are not efficiently utilised, they will only benefit a privileged few, leaving the majority in poverty.”

He then made the popular statement, now the mantra of his presidency: “I believe if Nigeria does not kill corruption; corruption will kill Nigeria.”

This is the important document Adesina repudiated because Nigerians demanded that their president makes good his promise to publicly declare his assets.

Why did Buhari, a man who was so ‘poor’ he relied only on goodwill to raise N27.5 million to buy his party’s expression of interest and nomination forms for the 2014 presidential primaries, find it difficult to publicly declare his assets?

Why did he suddenly realise that the law only requires public officers to declare their assets? Did anybody ever tell him the law said otherwise when he voluntarily made the promise?

If we concede to Buhari that he complied with the law by declaring his assets to the Code of Conduct Bureau, why were we assailing former President Goodluck Jonathan who did the same and said he didn’t give a damn about public opinion that he should do so publicly?

Even if Adesina’s spin that the document was APC’s and not Buhari’s is assumed to be correct (it is not), it raises another fundamental issue of double standards.

While the crisis in the National Assembly (NASS) raged, Buhari was quoted many times as insisting that the party is supreme and the gladiators in the NASS must bow to the dictates of the party.

It would appear his vaunted party supremacy only applies to legislative offices. That is sheer hypocrisy.

The denials even got more absurd when the other spin doctors of the APC weighed in.

While Adesina distanced Buhari from the document but admitted, nevertheless, that it was authored by the APC, both Garba Shehu, Senior Special Assistant to the President on Media and Publicity, and Lai Mohammed, APC Publicity Secretary, claimed that neither the party nor Buhari knew anything about it.

Shehu kicked off the campaign of distancing the APC and Buhari from the campaign documents that swayed votes for him and his party in an opinion article published on August 28.

He wrote: “In the course of electioneering, the presidential campaign had so many centres of public communication which, for whatever reason, were on the loose.

“There is a certain document tagged ‘One Hundred Things Buhari Will Do in 100 Days’ and the other, ‘My Covenant With Nigerians’.

“Both pamphlets bore the authorised party logo but as the Director of Media and Communications in that campaign, I did not fund or authorise any of those. I can equally bet my last kobo that candidate Buhari did not see or authorise those publications.”

A few days later, Mohammed upped the deceitful ante. He said on Channels Television that Buhari and the party had nothing to do with any other campaign materials apart from the APC manifesto and constitution.

“Buhari never promised to do anything in 100 days, that’s the honest truth,” he insisted.

“When you are running a campaign, all kinds of literature will emerge from all sorts of groups but there are only two documents that you can judge a party with: That is the constitution of the party and the manifesto of the party.”

Really? If Buhari never promised to do anything in 100 days, on what basis was he elected?

All these denials are egregious lies, revisionism at its worst, which raise a fundamental question. Do APC chieftains and the Presidency have any good reason to be agitated about being put in the cross-hairs over promises made before the elections, which catapulted them to power?

Now that Buhari and Vice President, Yemi Osinbajo, have finally made public what they filled in their assets declaration forms, the question that agitates the mind is why all the foot dragging? In a country where local government councilors become millionaires before the end of their tenure, why would a former military head of state, former petroleum minister, former military governor, and former chairman of Petroleum Trust Fund (PTF) hesitate in declaring 270 heads of cattle, two mud houses, and N30 million publicly as his assets?

Or is there more to this assets declaration ritual than we are being told?

What this needless drama has proved is that our leaders are not prepared to keep their word unless the people so demand.

Buhari, despite his vaunted integrity and transparency, is not different.