Obasanjo's Address To The Nation…

Freedom of expression, as you all know, is one of the main tenets of our cherished Democracy. If you all recall correctly, I have never, at any time, confided in any one, friends or foes alike, that I am interested in prolonging my tenure as President beyond May 29, 2007 which is the time allowed for me to step down as President following my second term in office.

I have hitherto allowed the debate to go on unchecked, because I am a strong believer in the Freedom of expression as a born-again democrat. Now that the National Assembly and the Senate have had their say and the resolution has been defeated, I want to assure you that it was never my intention to breach our Constitution and my track record in Government speaks volumes on that. You will recall that I could easily have prolonged my stay in office in 1979, if I had wanted to. I did not do so, because my word is my bond. 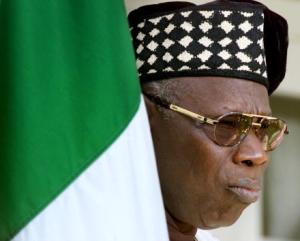 As a born-again Christian I do know that power belongs to God and God gives His grace and Power to whoever He chooses. I did not intervene to stop the debate on whether or not I should serve a third term in obedience to God. The same God has now told me it was time for me to speak, and that is why I am addressing you tonight.Now the elected representatives of the people have spoken loud and clear and their verdict has endorsed my initial premonition and inclinations that I return to my Ota Farms as I have stated on more than one occasions to anyone who would care to listen, while the debate on my intention was being hotly debated in the nook and corners of our country.

I love this country as much as any of you, if not more, and I am willing to die to reserve her peace and harmony like I did when I ended the Biafran War in 1970. I believe I have laid a sound foundation for our country in all the years I have had the privilege of leading this country.

Our Foreign Reserve today has never been more buoyant.For the first time in our History, we have broken even. Our country does not owe a dime to the Paris Club, no more, and we are right on our way to securing the future of our great nation and to guarantee freedom for all and life more abundant to the great majority of our people.

My Administration has risen to the challenge of fighting Corruption and reducing it to the barest minimum far better than any other leader in our country. Even though the problems of NEPA and the problems of food shortage, drinking water, good roads and petroleum distribution still remain a nightmare in our country, we have come a long way in putting a dent on those problems.

My Administration is also addressing the problems of Crime, Violence and Terrorism to the best of our ability by working with the International community. The Federal Treasury was virtually empty when I took over in 1999. Today our Foreign Reserve is huge and overflowing. Very soon, Government would be able to address the problems of the Oil-producing areas because we now have the money to effectively face up to the problems like a laser beam.

It is true that I am concerned about not leaving the governance of the country to kleptomaniacs but I believe in the cliche that a country deserves the Government it gets. The people have spoken that amending the Constitution and prolonging the tenure of this Regime is not their priority, and I totally agree with that.

I am speaking now, not as a politician but as an elder statesman with a lot of stake in the survival of a nation great in achievement but greater still in promise. Therefore in recognition of that awareness I appeal to all of the warring factions on both sides of the Isle to please bury their hatchet, and to please give peace a chance, so our country can move forward in harmony and glory, as the biggest black nation in Africa south of the Sahara.

I have always wanted to tell Nigeria that if nominated I would not run, and if elected, I would not serve. Now you are hearing it from the horse’s mouth. All I want now, is to return to my Ota Farms to do what I do best. I can assure you all that God is in control, and that God would give us a leader we truly deserve.

We still have more than enough time to do that.God bless you and God bless our great country. Good Night.

Side comment: Why would any rational leader take his country through this kind of ordeal only to make a right-about-turn at the last minute in an effort to save face when he suddenly realizes he has murdered sleep, and could sleep no more as observed by Shakespeare? Your guess is as good as mine. Watch out for developments on the Third Term Quagmire.