Pat Utomi And The Restoration Group

The old saying by Aristotle, the Greek philosopher that man is by nature a political animal is true. No matter how hard you try to get away from it, it sucks you back in. Though I crave to do more soft and human interest essays as I try to sharpen my rhetoric and style for a proposed book, it is proving a bit difficult to hold up my promise to myself, not with all the things going on in Nigeria as 2007 approaches.

One thing or the other usually occurs in the political arena that moves me to comment. Just the other day, I was at the Paddington Hilton hotel in central London and couldn’t help but marvel at the way the hotel’s lobby had been turned into a meeting or campaign ground by Nigerian politicians. I have now twice witnessed these gatherings involving senators, governors and the usual hangers-on. It appears that all such political meetings and strategising sessions are now conducted overseas. Room rates at these hotels go from £200 a night, and the people that I recognised did seem to have their usual retinue of aides who are also quartered in the hotel. Looking at some of the many groups of Nigerians in the diaspora and the court jesters who come to ‘pledge’ their loyalty to the politicians holding court at the hotels raises serious questions about the extent of the development of the political process in Nigeria.

My conclusion is that we are still heavily involved in money politics. This may be of concern to our friend Professor Pat Utomi and his Restoration Group (RG) unless they start now to plan on ways to counter such negative effects of money politics on their 2007 plans.

Governor Orji Uzor Kalu of Abia state seems to have pioneered this trend of campaigning abroad for elections holding in Nigeria, when obviously those Nigerians in the diaspora have limited influence over the outcome of elections in Nigeria, as INEC has recently ruled out e-voting. And so one still wonders at what these foreign campaigns are meant to achieve, outside being used as an avenue to ‘obtain’ electioneering campaign funds from diasporas under the pretext that they would be nominated into governmental positions should the candidates sail through. 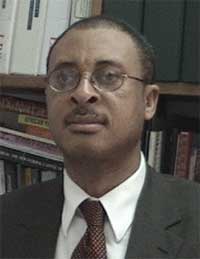 Professor Pat Utomi, the ideas man who made his name in academia, industry and political commentary is one of the latest entrants into the dark and murky waters of Nigerian politics. The Patito’s gang moderator has finally succumbed to pressures from his conscience and also from his many admirers to enter the ring and fight, rather than adopt the usual stay- by- the- sidelines-and-criticize approach which characterises our intellectuals and social critics. The professor is hoping to use the Restoration Group, an offspring of the Concerned Professionals as a springboard to Aso Rock in 2007.

While we commend the professor for his decision which seems to have been made with the wellbeing of Nigerians in mind, it is also important for the professor and his group to be reminded of the nature of Nigerian politics, and be given a few suggestions which hopefully may help the group to actualise their goals of seeing good governance enthroned, increasing capacity and opportunities for growth, development and enterprise.

Experiences from the world over tell us that elections are not worn only by possessing sparkling curriculum vitae. If it were so, the 50 year-old professor would automatically be OBJ’s crown prince and successor. Also Ross Perot would have long completed his 2nd term at the White House. Politics in our part of the world, especially in its present form detests ‘intellectual busy bodies’, it shies away from ideals and principles, choosing instead to welcome with open arms ‘system men’, people ready to maintain the status quo and continue business as usual. Politics is like a job for the boys, a profession for ‘failed’ businessmen and women, disgraced soldiers and fallen angels out to make a fast buck. There is generally a lack of culture of service for Nigerian people by politicians. This is where the professor may find his campaign niche as he is a strong proponent of selfless service judging from his life philosophy and writings, which he once described as his own recipe for achieving spiritual and material immortality.

The task awaiting the professor and his group may seem daunting but not impossible, the main challenge however is how the professor and his group can survive in these circumstances and hope to keep their heads above the waters, considering the intrigues, backbiting, godfatherism, thuggery, assassinations, occultist practices and bribery which are all characteristics of our politics. Also worrisome are the unlimited funds available to Prof. Utomi’s opponents, and the acquiescence culture of Nigerian ‘chop and clean mouth’ voters.

The professor may have formally taken the first positive step by relinquishing his teaching responsibilities, and has formally been granted a leave of absence from the Lagos Business School. Hopefully, he has done the same at Platinum-Habib Bank where he is Vice-Chairman. Now the serious business of politicking can begin.

My initial thoughts for the professor and his group are that they would need to reach out to Nigerians more and sell their vision. Currently, it appears that the group revolves around Professor Pat Utomi. This is a rather delicate strategy because of the fragility of election candidates, especially in our country where we still have primordial attachments to our ethnic groups. The strategy rather should revolve around themes, contract, charter or proposals for Nigerians, based on promises of selfless service, economic growth, infrastructural development etc. The other members of the Restoration Group should also increase their profile and media visibility, that way Nigerians can make a balanced assessment of their respective backgrounds and credentials. This would also help to take away some of the attention and heat from the professor and prevent the organisation from being regarded as a ‘one man show’. The credence in this argument is that while the professor remains focused on problems at the federal level, there are also other issues at the state and local government levels requiring urgent attention, which the other members of the group should focus on.