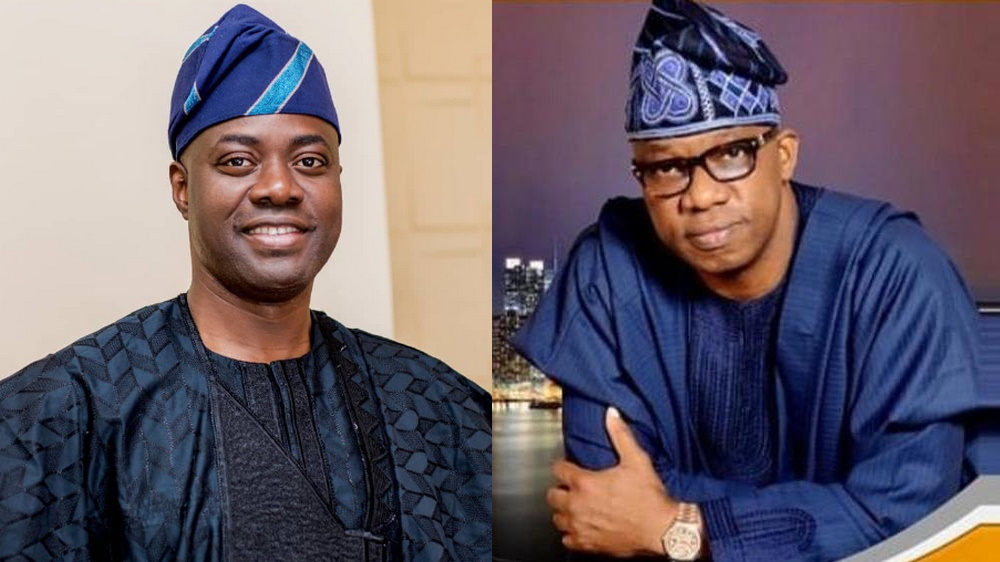 A tale of two Billionaire Governors: Seyi Makinde the Bishop’s Boy and Dapo  Abiodun, the Prince from Remo

When I think of the two Governors – I mean the Governors of Oyo State and  Ogun State – what readily comes to mind is “High Tech”. You ask why? Well, I kmow they are both Engineers; Seyi Makinde, an old boy of Bishop Philips Academy, Ibadan, an Electrical Engineer, and Dapo Abiodun, a Civil Engineer Prince from Remo, and they are both into Oil and gas, but this is not why I think of High Tech.

That name “Abiodun” being of Ogun state readily takes my mind to  Dr Adigun Abiodun of Araromi Village, Ogun State, son of a cocoa farmer who went on to head the United Nations’ highest body on the peaceful use of outerspace; author of the Book, Nigeria’s Space Journery, he would be 80 years on September 26 this year.

Going to Oyo State, I know Governor Seyi Makinde has lived in Houston, Texas,  which is knnown as SPACE CITY. It was in Space City, precisely Rice University, that U.S. President John F Kennedy gave reasons why the United States chose to attempt to land on the Moon. And you know what these two Governors, Makinde and Abiodun were sworn on Kennedy’s 102nd birthday anniversary – May 29, 2019, Kennedy having been born on May 29, 1917.

Bearing in mind the perceived resourcefulness, experience and exposure of these two Governors, there are ”Great Expectations”  from Nigerians and perhaps other African people.

It’s already 100 days they were in office and the controversies as well as the stock taking have already started.

Oyo State has declared Free education whilst Ogun State has just abolished Free Education contrary to an electoral promise. This is not as easy as saying it is good or Bad. One has not being able to ascertain the Tax collection situation in Oyo state. Tax is normally used to fund Education, Health, Social Welfare and Culture. I also do not know the situation for Tax Collection In Ogun State.

Experience has shown that when people are made to pay a form of Tax they take interest in what their money is being used for. Which  may be good somehow if it has to do with Children’s Education.

The second thing is that we have two entreprenuers as Governors here and since we believe they will be able to shore up the fortunes of their states within a very short period so that if the initial intention was to provide anything free which they are unable to do now they can do it in future. We must add here that Chief Adeola Odutola, Industrialist and a famous indigene of Ogun state, had as one of his favourite sayings ”If you think Education is expensive try Ignorance”. I think this saying applies to those on both sides of the divide.

Engineering, we are told, creates wealth and this has been explained as the success behind what we know of China. Only very recently the President and the Prime Minister of China were Engineers. So much is expected with Engineers at the helm of affairs in Ogun State and Oyo State. Looking at  Oyo state, because of the electrical engineer Governor, we tend to remember Nikola Tesla who, for his contributions to the development of the supply of electricity, is referred to as the Father of the 20th century. Looking at Ogun State for her Civil Engineer Governor, we remember Islambard  Kingdom Brunel, a civil Engineer who was voted second only in importance, as a Briton, to Sir Winston Spencer Churchilll, famed  British Prime Minister.