“The Burden Of Citizenship Is On Nigerians” – Conversation with Frank Nweke, Jnr.

Q. So in effect, you are saying that criticisms against the government should be constructive

A. Absolutely, it has to be constructive otherwise you come across as an iconoclast, it looks like you have some axe to grind with somebody, and so you don’t see anything good. If you are saying something is not right, you must at the same time say this is the way I believe it should be done, and show some proof that it is workable.

Q. You are currently taking the Heart of Africa message around the world, Israel was your latest stop, how was the outing out there?

A. It was wonderful, I was excited, but let me correct you there, I went to Israel at the invitation of the Nigerian Ambassador to Israel, Dr George Mazu and his wife, apart from my presence and the presence of some of my staff, we did not really play an active role, because it was the initiative of the Nigerian High Commission. What they did basically was that for two days, they hired this 500-capacity theatre and in the two days we were there, the theatre was always filled to capacity, we told Israelis about Nollywood, we tried to sell our country through our local film industry, some Nollywood stars were there too, the Israelis were happy to see them in person, we had cultural dances, Nigerian fashion shows, we also had Nigerian food on display which people were happy to taste.

Q. So it was more about facilitating contacts and relationships with non-Nigerians

A. Yes, and telling people who we are. I believe that Nigerians are one of the most resourceful people in the world, we are very intelligent, we are warm hearted, skilled and talented. The Israelis were astonished because the things they saw on display from Nigeria could as well have been from Hollywood, they marvelled that things like these could actually come out of Nigeria, that’s the story we want to go out there, that despite the challenges, Nigerians are honest people and have the skills and talents to compete against the best in the world. I believe strongly that many more of our embassies and missions should be attempting to do what our embassy in Israel did.

Q. If you qualify the Israeli event as a success, is that something you would want to see replicated in other Nigerian embassies around the world?

A. Absolutely, it is something that I believe that they should do, because it is very consistent with what we are trying to do back home. To be honest, whats the essence of a foreign mission if they can’t do such things? For me, Dr Mazu has justified his appointment as Nigeria’s representative to Israel. He has also shown very clearly that he understandshis brief, I believe that the contacts that were made there would advance Nigeria’s cause. For instance right at the event, people were proposing to take the event’s concept to California and other locations, they were very keen.

Q. What are your immediate plans for the UK, are you planning a similar event here with the High Commission anytime soon?

A. Yes, we hope to have a formal launch of the Heart of Africa project sometime in August, we’ve been meeting to that respect, and our expectation is that the UK event should be as good if not better than the Israeli event.

Q. How do you expect Nigerians living in the UK to be part of the HOA project?

A. We are going to be communicating formally with them, however, we don’t want to come to the Uk to tell theNigerian story to Nigerians, our interst mainly is to tell our story to foreigners, Britons and non-Britons in the UK. My message to Nigerians however is to believe in themselves, we are the best in the world, wherever we’ve had the opportunity to compete, we’ve often dusted our rivals and excelled. So, I believe that Nigerians must remain positive and proud of our country, just like foreigners flocked to our country in the 70s, we are going to have them back again. 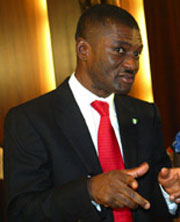 Q. Lets talk about 2007, the third term issue is over now, can you tell Nigerians the extent of your involvement, and were you in support of it?

A. There was nothing like third term, and if I knew the issue would come up at this interview, I would have come with the draft bill of the proposed constitutional amendment. The entire exercise was the outcome of a constitutional review and it is pertinent to reiterate how we got to the point where the national assembly discontinued the debate. Just before the 1999 elections, there were calls from civil society, NGOs and individuals for elections to be put off pending the formal review of the 1999 constitution, the reason being that the constitution was crafted by the military, the feeling was that Nigerians should now craft their own constitution, but of course wise counsel prevailed and the elections were held. Shortly after that, the Conference of National Political Parties of Nigeria (CNPP) made a similar call, they met severally and identified areas in the constitution that needed to be looked into. Academics, civil rights activists did the same, ultimately the national assembly whose constitutional right it is to make laws for our country including constitutional amendments when necessary looked at the document and felt strongly there was a need to progress the suggestions forward and ultimately set up a committee according to their procedures and practices. The committee did that, the political reform conference looked at the document too, and came up with a report which they subjected to public hearing and debate. The populace made some input, from which 116 issues from the 1999 constitution were identified as requiring review and amendment. These proposed amendments cut across many issues such as citizenship rights, state creation, local government financial autonomy, full autonomy and independence for INEC, the national assembly and so on. These were issues that would have changed the cause of our political history.

Q. So why did the issue of President Obasanjo’s tenure elongation overshadow the other equally important issues in the draft bill?

A. It was not just tenure elongation for President Obasanjo; it was part of the constitutional review, unless you are saying that after Obasanjo there would not be any other president in Nigeria. It was not just for President Obasanjo, it was about our country, the issues must be put in perspective. The phrase third term was a brilliant piece of propaganda by detractors, it was very dishonourable in that it was misinformative, misrepresentative, malicious, wicked and most dishonourable because it reduced all 116 important issues to just one phrase.