“The Burden Of Citizenship Is On Nigerians” – Conversation with Frank Nweke, Jnr.

Q. So would you say that anti-progressives won, because they were able to reduce all 116 issues to just one issue, also could it be that the government did not really get across to Nigerians and the members of the national assembly to explain what the core issues were?

A. Unfortunately there was a lot of misinformation out there, a lot of it. But that’s democracy for you, because no matter what you and I felt, the burden was still on the national assembly to either pass the amendments or not. That was democracy at work. I am a democrat and the president is a democrat, his statement afterwards showed that much, and his actions show that much. He respects the will of the people and also has respect for the national assembly. He clearly and fully understands the concept of separation of powers, and he is not one to interfere in the duties and in the powers vested in any arm of government, he is a statesman.

Q. I don’t want to speculate and thrive in rumours but Nigerians in the diaspora read reports concerning the attempts by the government to bribe lawmakers to pass the bill, probably like you mentioned , this may be all down to misinformation, we heard that lots of money were changing hands in Abuja, what do you say about that?

A. The truth of the matter is that no such thing happened; it was a product of the rumour mills and grapevine. The president remains committed to the anti-corruption crusade, and has not left anybody in doubt about that.

Q. Nigerians have always complained that previous governments didn’t give younger people opportunities in government. It is on record that president Obasanjo has given a whole lot of young people like you an opportunity. Do you think that this is a trend that will continue, and also do you think that you have represented your generation very well in the government?

A. Frankly, the latter part of that question is something that you will have to decide yourself, I don’t know what your impressions of my performance as a minister are but I want to say that I have deep respect for the Mr President for giving us the opportunity. Therein again lies also the illogicality of the argument of opposition politicians. If Mr President had no faith in the younger generation, if he did not believe in succession, if he didn’t think he should plan for the future, I do not think that some of us would have had the opportunity. I don’t think that Oby Ezekwesili would have been known, likewise El-Rufai, Prof. Soludo. Osita Ogbu, Nuhu Ribadu, Ngozi Okonji-Iweala and so on.

I remember meeting the president of the Israeli senate and they were asking “are you sure he is Nigeria’s minister of information?” this is because they are quite used to meeting much older politicians and cabinet ministers. The president has had faith in us, he has supported us, and he has empowered us, such that there couldn’t be a more profound example and proof of his faith in the future of our country. He believes that the future belongs to young people. Surely this is a trend that should be continued. With every sense of modesty, I believe that the younger people in cabinet have discharged their duties honourably.

Q. Your ministerial responsibilities would end with President Obasanjo’s government in 2007, what are your plans? Are you contesting for any elective position?

A. I don’t intend to run for any political office, I’m also not planning to retire to the farm in the village. I hope to return to the Kennedy school in America and complete my PhD in the next 1-2 years, and afterwards become a teacher.

Q. Thanks for your time and good luck with The Heart of Africa project

A. Thank you too. 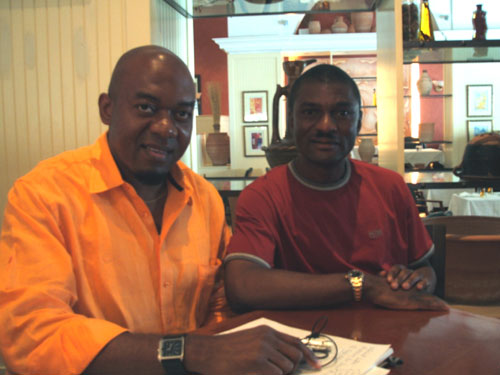 Click here for the audio version of this interview.