A combination of Clausewitz’s and the Machiavellian theory that ‘the Prince must employ any tactics, even vicious ones, needed to ensure his control over the state” may therefore seem enough justification for OBJ and the PDP of their actions. Notable incidents during Obasanjo’s government which reflect such thinking include the Odi and Zaki Biam massacres, the Audu Ogbe saga and the Abubakar Atiku affair. IBB also still has the deaths of Mamman Vatsa and Dele Giwa hanging over his head.

OBJ has perfected this tactics; in most cases using the apparatus of state such as the EFCC to witch-hunt political opponents, from a long list will include the likes of Prof. Fabian Osuji, Governor Joshua Dariye, DSP Alamiesegha, Tafa Balogun etc. Orji Kalu’s SLOK business Empire was also dealt a huge blow with the revocation of SLOK Airline’s operating license. Kalu the enfant terrible has been a strong critic of OBJ and his government and even wants to run for President in 2007, a position that the incumbent still cherishes so much. 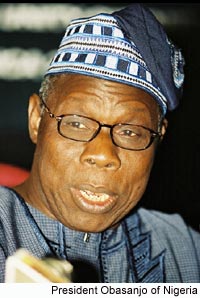 In contradiction, both OBJ and IBB seemed to have missed the section where Machiavelli cautioned that “it cannot be called prowess to kill fellow citizens, to betray friends, to be treacherous, pitiless, irreligious. These ways can win a prince power but not glory”. In continuation, he advices that “it is necessary for a prince to have the friendship of the people; otherwise he has no remedy in times of adversity”. OBJ obviously no longer enjoys the friendship of the Nigerian people and may just sooner than later find out that he has no one watching his back if he goes ahead with his plans for a third term.

IBB on the other hand boasts that he is in touch with the mood of the Nigerian people and by implication enjoys their friendship. In a recent statement while declaring his presidential ambition, he said: “Having been born and bred in this country, I have a working knowledge of the Nigerian’s mind., what he thinks, how he thinks and what he is likely going to do; and I am fortunate there is no doubt about it”.

Are these empty boasts? Not really, especially considering the nature of this political animal. According to Sun Tzu “A great general establishes his position where he cannot be defeated. He misses no opportunity to exploit the weakness of his enemy. A winning general creates the conditions of victory before beginning the war”. IBB obviously knows OBJ inside out, and having bided his time long enough has now stepped into the political arena, after his reported ‘stepping aside’ post – Abiola and June 12th, many politicians obviously owe him favours and he sure would want to cash them in now. According to Mike Ikhariale, “many people still go to him (IBB) for money and he is reputed to be very generous and anyone that seeks his favour gets it without too many hassles. That sets him apart from the rest of the pack. And in a society that is as poor as ours, it is obvious that many people would continue to sing his praises even if, deep in their minds, they actually hold him in utter contempt”.

In this case, Machiavelli’s words here may be sweet music to IBB’s ears, he says that “when a prince has the goodwill of the people he must not worry about conspiracies” and that “men are won over by the present far more than by the past; and when they decide that what is being done here and now is good, they content themselves with that and do not go looking for anything else”.

Could Nigerians have forgotten June 12th, Dele Giwa, SAP and all the other socio-economic issues that bedevilled IBB’s government? Maybe not, already anti-IBB groups are springing up all over the world, at the same rate as the anti- OBJ 3rd term groups. There is an Against Babangida website showing that Nigerians are not just folding their hands.