Disclaimer: The opinions expressed herein are by no means an endorsement of the principles of the characters being explored, this is only an unbiased analyses of the political philosophies and strategies of the characters from the standpoint of the ideologies of master political and war strategists such as Carl von Clausewitz, Niccolo Machiavelli and Sun Tzu.

The accompanying photograph to this article which depicts a much younger Olusegun Obasanjo (OBJ) and Ibrahim Babangida (IBB) playing a game of draught, with Danjuma and Abacha in the background acting as umpires makes it difficult not to believe former Police PRO, Superintendent Alozie Ogugbuaja’s widely reported swipe at the Nigerian military back in 1986. He had alleged that the military did nothing at their officers’ mess other than drink beer, eat pepper soup and plan coups.

The picture may also suggest that in addition to the ‘officers mess pepper-soup coup plotting theory’, the military (ex and serving officers) also meet at the officers’ mess to plan their strategies for dominating governance in Nigeria. 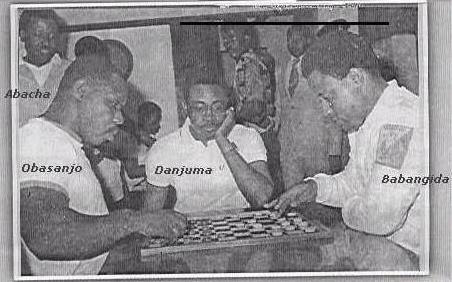 Is it any coincidence that three of the characters in the picture (Babangida, Abacha and Obasanjo) have ruled Nigeria for the past 30 years and by every indication are bent on carrying on? Surely such coincidence lend credence to the several conspiracy theories making the rounds in Nigeria, some of which has been well documented by Seyi Oduyela in his The Owners of Nigeria series and the cabal that they are subservient to. Some conspiracy theorists have even gone on to claim that whatever political scripts being acted out in Nigeria’s political stage today, are scripts written several years ago by the principal characters in the picture. This school of thought alludes to a sinister pact entered into by the characters; what is not clear from such insinuations is where the oaths were sworn to being that the Okija shrine hadn’t yet become a major feature of Nigerian politics at the time.

Mischief makers claim that the principal characters involved (IBB and OBJ) may still be seeking to cash in or make good on bets which they may have made years ago over a game of draught, on who will be the longest serving Head of State in Nigeria – in or out of uniform. Political analysts like Chigbo Ugochukwu who belong to the latter school of thought maintain that “the thing between OBJ and IBB is a matter of pride and honour, driven by selfishness rather than national interests”.

Whether such theories are true or not, the fact remains that IBB and OBJ arguably remain the two most controversial leaders Nigeria has ever had, and for various reasons.

The stage is now set for another battle of the ex-generals as OBJ has started making moves to secure a constitutional amendment that will allow him to seek a third term mandate, IBB himself has recently stepped out of the shadows and has declared himself a candidate for the 2007 presidential elections. How will this battle of the generals pan out? And of what consequences will their fight and antics have on Nigerians who unfortunately are the pawns in their political draught games?

Sunny Ogbu, an Abuja based entrepreneur says that “as far as the battle of the generals go, the OBJ/Buhari electoral fight in 2003 was a mismatch and will pale in comparism to the coming OBJ/IBB battle in 2007”, according to him, the two generals will fight to the finish, “both being in their twilight years, it will be a winner takes all battle, everything or nothing”.

These indeed must be interesting times for political scientists and analysts in Nigeria, but it may seem that just like the proverb that says “the grass suffers when two elephants fight”, it is the Nigerian people that will suffer the consequences of such political manoeuvres.

An analysis of the stratagem of the two generals may be necessary here, as they may be good indicators of which of the two candidates may likely come out tops come 2007. My premise after surveying the current political landscape in Nigeria is that there seems to be no other serious candidate that may challenge IBB and OBJ and seriously upset their plans, the reasons being that party politics in Nigeria is a high stakes affair (money politics), to run a presidential campaign will require limitless budget and political structures that only an IBB or an OBJ could afford. The reasons being that both have ruled Nigeria during periods of oil boom, occasioned by the Middle East crises and have thus benefited from unfettered access to national treasury.

Even IBB himself subtly acknowledged this fact while answering questions about his chances in the impending battle for Nigeria’s presidency, “it is not easy to defeat an incumbent but it is not impossible” he said, thus rating his chances of succeeding OBJ highly. Obviously aware that OBJ has not yet declared any vacancy in Aso Rock, IBB pitched his campaign on the side of the people saying that his major preoccupation was to “wake the consciousness of Nigerians in the months to come, so as to make them defend their votes”.

An anonymous respondent to my questions in the course of researching this article says that Nigerians should discount any moves being made by Vice President Atiku, Muhammed Buba Marwa, Ahmed Sani Yerima and other Presidential hopefuls from Northern Nigeria, according to him ‘There is a north

ern agenda Nigerians don’t know; Atiku and the rest may just be diversionary tactics for a wider agenda. The difference between the northerners and the southerners is that the northerners could easily unite and work towards actualising a common agenda, whereas greed, selfishness, in – fighting and other bickering make any such unity and alignment of goals impossible amongst southern politicians’. The respondent who is also a keen observer of Northern politics within a broader Nigerian political landscape cited the cases of the reported bust-up between Andy Ubah and his brother Chris Ubah over Andy Ubah’s gubernatorial ambitions in Anambra state, and also the back biting and lack of unified position in the Senate post -1999 elections, over the nomination of a senate president between Evans Enwerem, Chuba Okadigbo, Pius Anyim, Jim Nwobodo, Arthur Nzeribe and Ike Nwachukwu. “That goes to show the extent of the problem with southern politicians” he says. “When even two blood brothers can not agree to work together and pool together their influence and resources to achieve success at state gubernatorial elections”.

This respondent’s position is not any different from that of Prof. Ihechukwu Madubuike, the former Health Minister who in his 2001 paper Incongruencies in Modern Igbo Politics lamented thus: “At the state level the same antiphonic relationship has been at play. When it is not Nnamani and Jim, it is Anyim and Egwu or Mbadinuju and Emeka Offor, or still Orji Uzor Kalu and Ojo Maduekwe, et al. Yet a little circumspection, a little display of the spirit of give and take here and there, a little regard for the image of Ndiigbo, a consensus of some form, would have spared Ndiigbo the current spectacle of shame and the derision of our compatriots who see us as a people who cannot put their home in order. A symphony of talents, a congruence of ideas and abilities, would extirpate political collusions and enhance political consensus for our common good. It will enable us to channel our abundant energies into more creative enterprises and solutions. It would help us to syndicate and synchronize (Okadigbo). The “carrot and stick” principle will always be at work, but that is not a good enough excuse for ethnic infidelity”.