The Judiciary Has Continued To Save Nigeria From Doom – Placid Aguwa, Former NLA President

U.E. Mr. Aguwa, I do not think that it is too much to expect an association of lawyers from Nigeria to be troubled each time there are clear instances of what many people have described as constitutional rascality and raw advertisement of official lawlessness in Nigeria, as witnessed in states like Ekiti, Anambra, Oyo and, now, Adamawa. But the NLA appeared totally indifferent, and has continued to maintain a loud silence. Could this be because of the problem of logistics you talked about earlier, or the fear that some key actors of the present government who are friends of the NLA might be embarrassed if you came out hard on what many people perceived as budding dictatorship?

P.A.: You will like to see an NLA that is more outspoken on the issues, however, NLA has not been silent. Mr. Ejinkeonye, let me correct a false impression that you have. NLA has no allegiance or loyalty to any person, especially any so called “actors of the present government.” Years ago, NLA honored Former Minister of Finance, Dr. Ngozi Okojo-Iweala, is she one of the actors you are talking about? We can all agree that she did a relatively wonderful job. The Attorney General of Nigeria, Chief Bayo Ojo, was guest speaker at our annual dinner, is he one of the actors you are referring to? His attendance and that of other former Attorneys General, has not compromised NLA. The NLA has always engaged such “actors.” In all countries of the world, Attorneys General speak at lawyers’ events. So, I totally disagree with your innuendo. Whether you are aware of it or not, and whether it made headline news or not, there have been certain actions of the Attorney General which I spoke against while President of NLA. I am no longer the President of NLA, so I do not speak for NLA, however, I can confirm that most members of the NLA have been saddened by the rascality of many Legislatures and some within the Executive arms of the government. I cannot call President Obasanjo a dictator, however, some of his actions have been authoritarian in nature. I always measure my criticism. While the president has shown some level of military totalitarianism, on the other hand we should also commend his fight against corruption as well as many of his economic reforms. Don’t get me wrong, he could have done much better for the country and should have been more even-handed, however, as much as I believe he is not a saint, think about this, one Naira recovered today, is one Naira that could not have been recovered eight years ago.

Let me tell you a story, years ago, NLA engaged the late Attorney General of Nigeria, Chief Bola Ige during the peak of the Amina Lawal’s death sentence, I hope you remember that name. NLA was outraged that she was condemned to death for an alleged adultery. In my presence, in New York City, Chief Bola Ige made the following statement, “…as long as I am Attorney General, Amina will not be killed.” Of course, Chief Ige was killed months later, but whether or not he actually did anything to save her, the good news is Amina is alive today, thanks to people like Chief Ige who spoke out and thanks to Ms. Hauwa Ibrahim who fought the court battles. So, my brother, public advocacy is not just going to the press or beating drums of war, you need to privately and publicly engage those you refer to as the “key actors”. You and I agree that democracy is run by way of rules and laws. We cannot have a democracy where lawmakers constitute themselves into lawbreakers and the Presidency seizes the moment to declare a state of emergency. The Presidency ought to take more proactive measures to assist in resolving these crises and not take political advantage of them.

Let’s look on the bright side. I am highly encouraged by the fact that the judiciary has taken the lead to protect Nigeria from further political insanity and confusion. The judiciary has distinguished itself as dependable and impartial. The decision of the Court of Appeal in Oyo and Anambra is a victory for democracy. When I was president of NLA, I commented on this publicly in several news media and public forum. Now, if you have been expecting the NLA to be more visible in the press, the public and courtrooms fighting these issues that is a fair expectation. However, you have to realize that NLA is based in the United States of America, therefore most of us are not on the ground everyday in Nigeria. Therefore, I appreciate and support the work the NBA has been doing. More than ever before, the NBA President, Olisa Agbakoba, SAN, has been outstanding and fearless. I guarantee you that the present leadership of NLA is exploring ways to collaborate with and/or assist the NBA, since we have the same goals, which is ultimately, a better Nigeria for all of us.

U.E.: Thank you. Apart from the annual dinner/awards, and, perhaps, a couple of seminars in a year, what would you identify as the real preoccupations of the NLA over these years? How does it differ, for instance, from any other social/professional club?

P.A.: NLA is a bar association and not to be likened to a social club. In between awards and seminars, NLA has a ton of other activities. For instance, we provide mentoring to law students and new attorneys. The secretariat keeps tab on developments in the legal community. Members get regular updates of changes in the law and the practice of law. Again, remember our legal clinics which are open to the general public. Also remember our quarterly publication “The Nigerian Lawyer” I am sure you have read prior editions.

U.E.: I have not. Well, how is life in exile? What do you think accounts for the mass exodus of Nigerians from their country to even some countries where they are subjected to various forms of degrading treatment? How do you think the trend could be reversed?

P.A.: I am not in exile. I am part and parcel of Nigeria. Sometimes, I am in Nigeria more than thrice a year. Professionally, I am in good standing as an attorney in Nigeria. You probably don’t know that I also practice in Nigeria. I handle business law and commercial law cases in and out of Nigeria. People have different reasons for leaving Nigeria. I can articulate hundreds of reasons, however, I think one of the most serious is the economy and its inability to create jobs. In a country where probably 70% of the citizens are not gainfully employed, traveling out of the country becomes a compelling option. Ancillary to this point is the issue of corruption. When a bunch of idiots embezzle public funds in billions, what do you expect? The economy continues to tumble, hence the perpetual feeling of helplessness. Amongst others, we can reverse this trend by the simple act of fighting corruption at all levels.

U.E.: Tell me about your law practice, what motivated you to choose the profession, and why you had to relocate to the United States? 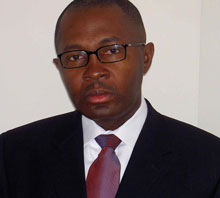 P.A.: Frankly, I never wanted to be a lawyer. My father got me into it. When I was very young, my father tookme to a court to observe a trial involving a disputed election for the traditional ruler of my autonomous community. One of the attorneys was very tall and articulate. My father looked at me and said, you have to be lawyer. Do you see how smart that lawyer is? From that point, all my efforts weregeared towards becoming a lawyer. I am glad I did. My firm is known as Placid & Emmanuel, P.C. We have offices in Manhattan and The Bronx, New York. We also recently opened a third office in Poughkeepsie, New York. Law practice has been lucrative for me. I thank God. I am a civil trial lawyer. I handle mostly civil and commercial law cases. I have a partner and a few associates.

U.E.: So what then informed your decision to relocate the US?

P.A.: I initially went on a one-month vacation. While in America, late General Sani Abacha started his mayhem. Most of my corporate clients were going out of business, and I decided to hang around for a while to see where things were heading. It got worse and I decided to establish in the USA, albeit, temporarily. For me, it was never a decision to become part of the system out in America. I merely wanted to stay for a while and set up an international law practice and thereafter make the best of the two countries. This is what I have achieved. So it has worked out as planned.

U.E.: What is your assessment of the Nigerian judiciary? Of late, Nigerian courts, especially the appellate ones, have given some landmark judgments that clearly underlined a new resolve to operate without the old, self-imposed constraints that had abridged their freedom in times past, what do you think accounts for this, and what does it portend for the future of the rule of law and democracy in Nigeria?

P.A. Rule of law remains the same, yesterday, today and forever. It is what it is. The future of democracy in Nigeria is what I am scared about. I read the news today that a top official of INEC said that the elections may not hold because of several pending court actions. Mr. Ejinkeonye, this is frightening. Do you know that candidates are already seriously campaigning for the November 2008 elections to be held in America? But in Imo State, barely two weeks before the April 2007 elections, it is not clear who the governorship candidate for PDP will be? The issue is before the Supreme Court. When will the rightful candidate campaign? How legitimate will the election results be? Listen, the judiciary has continued to save this country from doom. The recent decisions in states such as Oyo and Anambra States are commendable. The judges are now paid relatively well. They are fearless than ever before. When you read the judgments, they make sense. However, like I said, we cannot have a democracy where lawmakers constitute themselves into lawbreakers and the executive seizes the moment for political advantage. I am cautiously optimistic about the future of democracy in Nigeria. I don’t know if the judiciary alone can do the job, especially when the executive arm refuses to comply with court orders. Not when the INEC Chairman has become the interpreter of the Nigerian constitution. I think all hands must be on deck if we are to preserve democracy in Nigeria.