The Judiciary Has Continued To Save Nigeria From Doom – Placid Aguwa, Former NLA President

Placidus Aguwa, a New York-based attorney, is the Managing Partner of the law firm, Placid and Emmanuel, P.C., and former president of the Nigerian Lawyers Association (NLA).Since 1991, he has practiced law in state and federal courts in New York and Nigeria. In this interview with UGOCHUKWU EJINKEONYE (March 2007), he speaks on the activities of the NLA, and some of the challenges being faced by Nigeria in its tortuous journey to democratic and economic stability.

U.E.: When was the Nigerian Lawyers Association (NLA) formed, and what are its objectives?

P.A.: Thank you for your interest in learning more about the Nigerian Lawyers Association (NLA).NLA was incorporated in 1999 as a not-for-profit, non-partisan association of attorneys. NLA represents the interests of attorneys mainly of Nigerian descent both in the United States and all over the world. It advances the professional needs of its growing members and provides leadership and advocacy for the legal needs of and interests of the minority community in the United States and around the world.

NLA’s principal objectives are to cultivate the science of jurisprudence, facilitate and advance the fair and equitable administration of justice, serve the needs of the members of the Nigerian legal community, as well as the minority communities as a whole, in their understanding and access to the law and to educate and assist such persons in their day to day dealings with the law. 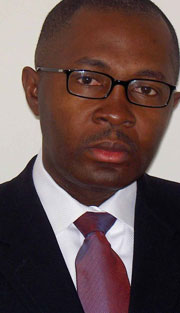 U.E.: The impression one gets is that the NLA is merely a New York affair, or do you have members in other states in the United States and other countries?

P.A.: Yes, we are aware of that wrong impression that NLA is a New York affair. The fact however is that NLA has its head quarters in New York, but membership is open to and indeed comprises of attorneys from all over the United States. We also have a handful of members practicing in Nigeria. It may interest you to know that NLA at one time or the other has had top officers who practice in states other than New York. For instance, a former Vice-President of NLA practices in Maryland. In addition, a former Chairman of the Board of Directors practices in New Jersey. Currently, we have members from as far away as Florida and as near as New Jersey. Note that we also have honorary members who are Judges, including a Judge of the Federal High Court of Nigeria.

U.E: A former President of the Nigerian Bar Association (NBA) had announced (during his tenure of office) that the NBA was not a pressure group; I guess you may have the same opinion in respect of the NLA?

P.A.: Well, what is a pressure group? The phrase is very resilient. If you characterize it from the point of view of a group that lobbies its own or limited interests, then NLA is not a pressure group. Indeed, a bar association is not a pressure group to the extent that it not only advances the interests of its members, but those of the public as a whole by ensuring that its members and the general public are guided towards understanding laws, and providing and/or obtaining justice. NLA represents the interests of attorneys mainly of Nigerian descent, particularly in the United States. Of course our goal is to reach beyond USA. Be mindful of our main objective, which is to cultivate the science of jurisprudence, facilitate and advance the fair and equitable administration of justice, serve the needs of the members of the Nigerian legal community, as well as the minority communities as a whole, in their understanding and access to the law and to educate and assist such persons in their day to day dealings with the law. Therefore, if performing these services entails some “pressure group” activity, so be it. However, NLA (or any typical bar association) is not a pressure group.

U.E. You said earlier that the NLA “provides leadership and advocacy for the legal needs of and interests of the minority community in the United States and around the world”, could you please specify the very people that fall into this category?

P.A. As I said, our particular interest is towards attorneys and the minority communities in the United States. Ultimately, we will keep expanding our sphere and perhaps make serious impact in Nigeria and other countries. The time will come sooner or later. NLA is still very young, you must note. However, diving straight to your question, yes, NLA has been providing leadership and advocacy for the legal needs of and interests of the minority community in the United States. Our activities in Nigeria and other parts of the world have been limited particularly due to funds and logistics. In the United States, NLA organizes Continuing Legal Education (CLE) seminars which are mainly attended by minority lawyers. I am glad to inform you that every attorney in New York, for instance, must attend at least 24 hours of continuing legal education within every 24 months or lose the license to practice law. Other states have same or similar requirements. NLA assists its members in meeting this requirement by organizing the CLE classes from time to time. Note that these classes are also open to the public at large. NLA has provided classes in Taxation Law, Real Estate, Negligence, Immigration law and many more. In addition, NLA organizes Legal Clinics wherein members of the public have the opportunity to meet and discuss their legal problems with our attorneys free of charge. Last year alone NLA organized three of such events in New York.

Once again, I acknowledge that NLA has not done much outside the United States, however, NLA did condemn the killing of former Attorney General of Nigeria Chief Bola Ige. Shortly after his death NLA condemned the act and called for justice to prevail on the killers and/or conspirators. Our position was made in a full page of one of the national newspapers, I believe it was The Guardian. I should also inform you that NLA periodically supports charitable works that are geared toward uplifting the less privileged. In 2005 NLA donated several thousands of dollars to charitable causes in Nigeria. As part of my speech last month during my handover to our new leader, Bola Oloko, I urged NLA to devote more time towards public advocacy, especially in Nigeria. I have no doubt that in the years to come, NLA will definitely get more active in Nigeria and beyond. Ultimately, public advocacy is about speaking out and fighting for what is fair and right for the larger community. Correct me, I think this is also part of leadership.

U.E.: In these days when tenure elongation appears to be the in-thing, why did you not seek another term, at least “to complete the good work you are doing for NLA”, as they say it in Abuja, Kampala, Conakry, Harare and some other places?

P.A.: The truth is that the pressure was on me to seek re-election. However, my brother, you get to a point in your life, when you have to let different and, hopefully, better ideas take over. More so, I have served NLA twice as Secretary, twice as Board Member and as President, thus, I missed being a regular member in every sense of the word. I will continue the good work by being an active member, attending meetings, seminars and serving in committees.

U.E. Why did you have to wait until the time you were handing over to a new president to realize that the NLA should now devote more time to public advocacy, especially in Nigeria?

P.A. It is incorrect to infer or allege that I did not timely realize the importance of public advocacy. NLA has always been for public advocacy. It need not be reminded and I have not done so. However, as an outgoing president, I had the opportunity to review the achievements of my administration and voiced my suggestions as to the direction the association should lay more emphasis. Like I said earlier, public advocacy requires funding and more. I think we are heading in the right direction, but don’t expect us to compete with local bar associations.