Since 2004 when the immediate past Governor of Ebonyi State, Dr. Sam Ominyi Egwu turned fifty (50) I have unremittingly commented on his life and times, especially as it concerns public affairs. Remarkably though, I had always, prior to 2004 written about the exploits of his administration while he held court as Governor of the promising, young State (1999-2007). Part of the propelling force for this self-imposed duty is explained by the mellifluent Irish Poet, William Butler Yeats as he captured it most succinctly in his riveting poem, “When You Are Old”. The first two stanzas underscore graphically the import of my action: “When you are old and grey and full of sleep, /And nodding by the fire, take down this book, / And slowly read, and dream of the soft look/ Your eyes had once, and of their shadows deep; / How many loved your moments of glad grace, /And loved your beauty with love false or true, /But one man loved the pilgrim soul in you, /And loved the sorrows of your changing face; ….” 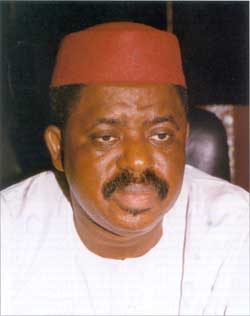 My story of sojourn in Ebonyi State by serendipitous invitation of then Governor Egwu to serve in his government is well known. How I also stayed tenaciously within the precincts of Ebonyi Government House despite the turns and twists commonly associated with Politics, especially in a developing nation has also been attributed to the boundless mercies of the Almighty God and the uncanny understanding and tolerance of my principal, Egwu.

However, this piece is not about me, but about an uncommon fellow, a man popularly known for his political savvy, calm disposition and undisguised love for humanity. This man is Dr. Sam Egwu who turned fifty-four on June 20, 2008. Sam Egwu has become so many inspiring things to so many different people – depending on the coign of vantage from which one evaluates him and his footprints. Indeed, a short, fleeting piece of this nature cannot do any justice to his towering stature. At best, it can only nibble away at the nectar. Hence, it will be better to allow his more eloquent deeds to speak for him.

Months, weeks and days to the build up of the People’s Democratic Party’s National Convention, which eventually held on March 8, 2008, most Party members were agreed that the candidate to beat at the polls was Sam Egwu. This apparent consensus was not without firm rooting. Understandably, of all the front-runners to the exalted office, Egwu had acquitted himself most creditably. He neither took the electorate for granted nor did he rest on his oars despite the rumours going the rounds that he was poised to carry the day. Against the barrage of suggestions that he restricted his campaign only to certain sections of the country, he unfolded a massive campaign agenda and rigorously, sincerely took his campaign train to all the thirty-six States of the Federation, including Abuja. Sam Egwu campaigned spiritedly, vigorously and successfully, not leaving anything to chance.

However, when on the wee-hours of 8th March, a contrary expectation emerged from the Party hierarchy to wit, the endorsement of Prince Vincent Ogbulafor as National Chairman, it was a stable, unfazed and courageous Sam Egwu that the nation beheld.

Truth is, on learning of the turn of events, most Egwu disciples and followers were not sure of the reaction of their principal. In fact, not a few of them stayed away from Eagle Square venue of the Convention, out of rank disappointment and some frustration. A number of them actually openly wailed at what they thought was a miscarriage of expectation. But typically as a Jesus Archetype, Egwu calmed them and rose to the occasion, extending his hand of fellowship to the new PDP’s helmsman, after addressing him as “friend and political associate”. It was really a sweet reminiscence when the other day, I saw Hillary Clinton re-enact the same Egwu scenario with regard to her political battle with Barack Obama. Of all the aspirants, Egwu perhaps was the first to articulately embrace Ogbulafor’s emergence and published the same in the national dailies.

However, that was not the first time that the former Ebonyi helmsman would throw in the towel when the party made its positions known. Earlier, during the presidential primaries in 2006, he equally acceded to the Party’s choice of President Yar’Adua and quickly mobilized the entire South East to vote for him at the elections.

In taking these bold steps, Egwu easily is seen in many quarters as level-headed and a realist. He has also by the same token, demonstrated a lack of desperation to grab power at all cost. He believes in playing by the rules and in the perfect Will of God. He works as hard as he prays, but when the result of his efforts turns awry, you will never catch him brooding over the past, as he would normally yield to the decision of the Almighty in the belief that every dog has his day. He is not one of those who believe that they only need the platform of political offices/appointments to promote the cause of humanity. Perhaps, this accounts for the impact he has continued to make in his community, state and society in general even after leaving office as Governor. His is a personification of the noble mindset public office-holders should have – in or outside of government, service to humanity should not flag.

Interestingly too, Sam Egwu is as upright as he is diligent. If you want a political leader who abhors straight-talk, engages in soggy underhanded game and plays full time to the gallery, you will sure not enlist Egwu. This is because his brand of politics sets store by openness and transparency, inclusiveness and principle. By now, perhaps everybody is well acquainted with his remarkable forgiving spirit, underscored by how he carried friends and foes along in his administration as Governor. That is why many people of goodwill saw it as sheer sour grapes when some persons who were opposed to him at the last campaigns and elections of the PDP’s National Chairmanship tried to pigeonhole him, as they relentlessly portrayed him as the preferred candidate of a particular party chieftain. At the time, some of us saw through the contrivance because that perception was purely a media creation by some desperate politicians who thought that was their trump-card to derail Egwu’s impressive political showing. However, those who know Sam Egwu and are honest to stand by their convictions would attest to his being one of the few politicians from the South East that are agreeable to persons of diverse tempers and inclinations in their leadership style.

Part of the reason Egwu easily accommodates opponents in his system is because he is not greedy or rapacious. To the surprise of a certain personage in Nigeria, Egwu returned the donation he made to his campaign just one or two days before the Party settled for Ogbulafor. Understandably, the man stared in disbelief as he thought that it was out of character for a politician to be saintly with money. But Egwu, of course, had no qualms at all in returning the fund because, according to him, since the donation had not been utilized, there was no reason being in custody of it. That should be a serious food for thought for politicians.

If there are politicians who are not held down by artificial boundaries of ethnicity, religion and other narrow cleavages, Egwu would be named among the first. Throughout his tenure as Governor of Ebonyi State, he never discriminated against so-called non-indigenes. He felicitously ran a system that was anchored in popular participation. His free education and maternal healthcare programmes were benefited by all inhabitants of the Sate. He equally gave political appointments to Yoruba, Hausa , Niger -Delta, etc. indigenes residing in Ebonyi State because as citizens they have equal stake in the development of the State.

It is also remarkable that Egwu matched his open-mindedness with kindness for all regardless of one’s place of origin. Indeed, Sam Egwu believes in the commonwealth of humanity; that what negatively affects a member of the family would sure, set in some disequilibrium in society’s cohesion. I recall, therefore vividly in 2004 when I was returning to Abakaliki from an official visit to Lagos and he (Sam) had just arrived in Lagos. We met at the domestic wing of the Murtala Mohammed Airport. On learning that I had some money on me he quickly took it and added to what he had and offered to a ranking traditional ruler from Enugu State who was being flown abroad for a medical treatment. Truly, the man’s condition was bad. To date, the Royal Father who is still alive has continued to relate with Egwu and pour out his heart in prayers for him.

The Holy Writ states that we shall only be remembered by our good deeds when we pass on to eternity. As I ponder the eventful life Dr. Sam Egwu has led thus far – the ups and downs, successes and apparent failures – I cannot but testify amidst other agreeable teeming voices that he is a good man who has touched many lives positively. And I am convinced that given the rarity of his personal attributes and brand of selfless and committed leadership, his future is bright.

Dr. John Otu, a former Member of The Guardian Editorial Board and Commissioner for Information, Ebonyi State, writes from Abakaliki.

Dr. John Otu, a former Member of The Guardian Editorial Board and Commissioner for Information, Ebonyi State, writes from Abakaliki.