What Obasanjo Wants From Washington

OBJ gave up Charles Taylor in a dramatic manner to warm himself into the heart of George Bush on the eve of his scheduled meeting with the latter. He then uses this opportunity to lay out his agenda for Nigeria. This is Obasanjo’s proposition to Bush.

Obasanjo informs Bush of the reforms taking place in Nigeria and the need for those reforms to be sustained for Nigeria to develop economically, socially and politically. He then proposes to Bush that he wants to sponsor a candidate for the Presidency in 2007. Obasanjo goes further to assure Bush that his candidate will win the Presidency in a free and fair election, and that he is confident that the President-Elect will continue with the reforms that would take Nigeria to the promise land. Obasanjo then lays out the kind of opposition the President-Elect is most likely to face primarily from the Northern elements. He goes ahead to inform Bush of intelligence reports that have linked some Islamic militant groups in Northern Nigeria to Al-Qaeda, and that there is the possibility that the aggrieved Northern elements, who will be stunned after losing out in the Presidential elections, may use some of these militant Islamic groups with suspected ties to Al-Qaeda to try to destabilize Nigeria, and by extension, the West African sub-region. Bush is at this point salivating at the mention of Al-Qaeda in the mix. 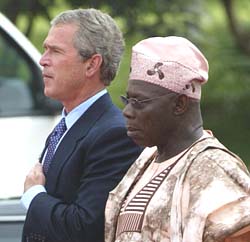 Obasanjo now lays out his exit strategy that will not only ensure the continuation of his reform agenda in Nigeria, but also guarantee his personal safety, and thus, ensuring his continued relevance in Nigerian politics. Prior to his meeting with George Bush, Obasanjo had pondered how to go about ensuring the above. He had two ideas. The First is to ask for and get assurances from Washington for safe passage to any country of his choice in the event that he has to leave Nigeria. Obasanjo did not realize the importance of getting such assurances until his ordeal in Abacha’s hands! The second thought is that Obasanjo wants to pitch the idea of him becoming the next Secretary-General of the United Nations. There have actually been rumors circulating at the United Nations to the effect that another African might succeed Kofi Annan as UN Sec-Gen. The likely candidate is going to be a Nigerian, this will be done to placate Nigeria for losing out in her bid to become a permanent member of the UN Security Council. South Africa and Egypt are likely to become the two African permanent members of the Council. Egypt is viewed as a stabilizing force in the Arab world, and with her advanced military, Egypt has the credential to become a permanent member. South Africa’s place on the Council, on the other hand, was assured all along considering the fact that she is the most developed economy in Africa today.

Obasanjo must have used the opportunity of his meeting with Bush to inform him of his (Obasanjo’s) intention to become the next Secretary-General of the UN. Obasanjo is desperately trying to shore up his international stature politically in order to continue to wield enormous political power back at home in Nigeria. Obasanjo seeks America’s support. Bush is most likely to support Obasanjo for some reasons. Bush is a crusader in the establishment of stable democracies worldwide to fight terrorism. Also, Nigeria is strategic not only to America’s energy security interest, because of her oil, she also has the potential to become America’s biggest trading partner in Africa. Bush is most likely going to put in motion the necessary machinery to ensure Obasanjo becomes the next Secretary-General of the United Nations. Barring any unforeseen realignments in international politics, Obasanjo will become the next UN Secretary-General, after he relinquishes the Presidency in Nigeria. I will not speculate on who will take over from Obasanjo, because I don’t know!. The reforms will continue in Nigeria under the watchful eyes of “Baba” from New York.

It is very important to point out that Obasanjo’s penchant for heroism is legendary, from his Nigerian civil war exploits to the acclaim he has enjoyed for handing over to civilians in 1979. Political historians have opined the he is so obsessed with upstaging the legendary Yoruba leader, Late Chief Obafemi Awolowo, by not only becoming the ultimate Yoruba hero, but also the Nigerian hero, that he would stop at nothing to achieve his aim. The only missing puzzle is the person that is going to succeed OBJ come 2007.

Olapojoye contributes to this website from the United States.

Olapojoye contributes to this website from the United States.