A Creature of Spirit: A Review of Jeta Amata’s Amazing Grace

Nigeria is known for inventing a few things. Four one nine e-mails, Lassa Fever, Afro-beat and to that I must add, giving the world the tune to Amazing Grace. Yes, I have just watched Jeta Amata’s film. ‘Where have you been?’ you ask. Same question I ask myself.

The film is a gem. You must see it. If you have, you must watch it again. It’s the best film out of Nigeria ever and there are none of the usual female leads (special thanks to the requirement of being able to speak Efik).

Now, the story is about John Newton’s experiences as a Slave trader in Old Calabar. He learns about the humanity of the ‘African savages’ and indeed concludes in the end that they are all one of God’s creatures.

John Newton (24-7-1725 to 21-12-1807) penned the hymn Amazing Grace to the tune of an Efik song he heard while in Calabar and also as a result of his conversion to evangelical Christianity. 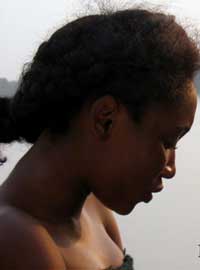 Film starts with a peaceful scene of communal harmony then Maria Davies (Joke Silva) starts her narration (Lovely voice). ‘It’s Titanic all over again’ I moan to myself but soon get used to her voice.

The brutality of the slave trade is on display. A particular character, a Mr Fix it for his Oyinbo oga is Orok (Itam Williamson). He seemed always at pains to show how tough he was. Even when lifting frail little girls he huffs and puffs. A real Uncle Tom he was.

Will not spoil it for you by going into the plot.

The music was good and writing very good. Although the film was written by Jeta Amata, the credits at the end of the film read – additional writing by Nick Moran and Scott Claverdon. It showed. The English use there language differently. My favourite dialogues was between Newton (Nick Morran) and Oliver Platt (Scott Claverdon ).

Platt was about to shoot Etim (Fred Amata) who had been wrestled to the ground and Newton says to Platt ‘Don’t shoot, a creature of such spirit is worth three of them’

‘But he is dangerous’ said Platt still pointing his pistol at Etim.

‘A civilised man does not shoot a thoroughbred for folly. Chain him’ said Newton. I found that very enjoyable. (I hope I am not the only one o).

The scenery was quite good although at times you felt the cameramen were trying to out do each other in filming birds and sunsets. About the 17th scene, the slaves walked down hill in a single line (like lamb to the slaughter) and end up in a big cage. Poignant.

Soon Ansa (Mbong Odungide) is brought into the cage and she is surprised to find her cousin Etim there. Ansa steals the show. She has a commanding presence and is the centre of attraction in every scene she appears. (Na she win pata pata.).

Like I said before, you guys should all go and buy the film.

About the fourteenth scene; 26.12 minutes on Disc One, the camera scans the carnage left behind by the slave raiders. The belly of the dead witch Doctor is shown. It is still. Etim then wakes up from deep unconsciousness and is as fit as a fiddle. Not even a drop of blood on his head. (Ah ah, a head injury that will send you into comma should leave some wounds now. And man no fit jump up from comma begin run like Ben Johnson, no matter the Viagra or steroids as the case may be).

He sees his wife dead on a bench nearby (how convenient) he laments and sees his child dead and screams. By now the dead witch Doctor can hold his breath no longer and his belly begins to move! 26.52 minutes. (Abi the guy man resurrect?)

Etim looks around and a spear is stuck in the ground, which he grabs and then goes in pursuit of the slave traders (but not before asking directions from a strategically placed crying woman).

2 minutes later a silhouette of Etim reveals his spear bearing a cloth towards the head end. (Bros, were you buy that handkerchief from?).

Fred Amata and Nick Morran did very well, but that Ansa eh…

Over to second disc. 10.10 minutes. I think this can be classed as a love scene. Ansa and Newton are on the deck with the river in the background. They stand face to face smiling sheepishly and I am really digging this. (That Ansa, she fine o!). I almost expect Celine Dion to start singing. (You sabi say, man and woman on top deck equals to Di Caprio and Kate Winslet now).

Apparently Simmons (James Hicks, Oyinbo slave raider who has been punished for his ‘sins’ by being shackled with the slaves) has been giving English literature master classes below deck (that hot, smelly, diarrhoea on each other hell hole; some class room!!) and Ansa learned quickly. So quickly she can have a conversation in English and even understand Newton’s complicated sentences. Wonderful!

And most astonishing of all, Ansa’s English gets steadily better as she talks with Newton. Here are excerpts from what she says (I am meant to be talking about the film o, but I am quoting Ansa. Come to think of it, which Nigerian singer had that hit, Baby don’t cry, please don’t cry… Ansa baby… Na Tony okoroji?)

‘We go back’ Ansa says. I will not include Newton’s responses (make una go buy una own copy)

‘But you serve they eat’

‘Tell me what they do’ Etc, etc. With effortless charm she warms her way into Newton’s heart.

Now for the best part of the movie.

John asks her name to which she replies ‘Ansa’. Then she asks his name. He replies like 007. ‘It’s James, James Bond’, but in this case, ‘John. John Newton’.

From that time till the end of the film she calls him, John John Newton, so naturally. None of that obvious, garish slapstick comedy Nollywood is known for.

Hearing and thinking about John John Newton is still bringing a smile to my face.

Last scene has an English choir sing Amazing Grace followed by a rendition of the same by Maria Davies’ daughter (Chika Chukwu). She (Chika) sang with all the trimmings. It was like Ogbono with Shaki, Cow leg, bokoto, show boy, panla, efritin dey. Black women can sing sha.

At the end of the film Sammie Okposo (Una sabi say Sammie will always deliver) and Abayowa Ojuyah sang Amazing Grace while the credits rolled.

By then I had finished my Guguru and groundnuts totally satisfied.

JETA AMATA, DON’T EVEN THINK ABOUT IT.