It was impossible believing what my eyes were seeing.

I did a double take because it’s not every day one sees a great masquerade walking alone, without attendants or courtiers or whatever.

The scene manifesting before my very eyes in the open courtyard at Freedom Park, Broad Street, Lagos during the Lagos Book & Art Festival (LABAF) was too surreal to be grasped immediately.

I waited for moments on end until a measure of certitude crept into my consciousness. Then I made my move.

It was Alhaji Abdulazeez Ude walking away all by himself after having just gone to see the art exhibition entitled “And The Centre Refuses To Hold” curated by Krydz Ikwuemesi that paid homage to Chinua Achebe’s Things Fall Apart at 60.

Before I could even say a word, Alhaji Ude beamed with a beatific smile and asked for my phone number. I called out the number and he duly stored it.

Much later, when I had all but forgotten everything about the encounter with the great man, I brought out my phone and saw I missed call.

I called the number. It was Alhaji Abdulazeez Ude at the other end.

A quintessential icon of culture, Alhaji Ude is the most personable man of means known to me.

He was the financier of a newspaper, Financial Post, I once worked for. Alhaji Ude paid the bills but the publisher of the title was the maverick “Motor-Park Economist” Ashikiwe Adione-Egom.

How can one ever forget the lofty end-of-year parties Alhaji Ude used to host for the staff in his Mekuwen home, off Queens Drive, Ikoyi.

I once told him he was making me live above my means as a poor poet, and he jovially directed me to the publisher Ashikiwe so that I would ask him to increase my salary!

When one took ill with ordinary malaria, there was the benefit of comprehensive medical care in his wife’s hospital.

It was indeed a family of remarkable camaraderie.

His office on Awolowo Road, Ikoyi always teemed with all kinds of people asking for assistance as per business failure, paying school fees, helping accommodation and paying rents.

He was a rendering father figure in overdrive. I used to wonder how he coped with all the demands put on is calm visage.

His funds were always available for intellectual concerns. He was the financial chest behind the classy Chic Magazine published by Eddie Iroh out of London, England.

He was a director of Newswatch magazine and many other publications besides.

A man of impeccable bona-fides, he was educated at Oxford in England and Columbia in the United States.

He was a top editor with the renowned American book publishing company Doubleday, publishers of Anchor Books.

He rubbed shoulders with Toni Morrison as book editor before she branched out to write novels such as Song of Solomon, Beloved etc and winning the Nobel Prize for Literature.

Abdulazeez Ude founded Nok Publishers in the United States and Nigeria, undertaking to see radical books from Africa and the Global South in print.

The West and the Rest of Us by Chinweizu is a landmark title.

His support for popular culture is remarkable, and the celebrated highlife musician Oliver de Coque waxed lyrical in song in praise of the many achievements of Abdulazeez Ude, translated from Igbo thusly: “When the big masquerade appears in the square, the non-initiates run away as the praise-singer lauds the radiance of the king. Alhaji Abdulazeez Chivuzo Ude is a mighty masquerade.”

He played a founding role in the African Business Roundtable and the African Development Bank.

Always understated in his undertakings, preferring to operate from the background, it always needs painstaking inquiry to learn that he’s the brain and the war-chest behind many ventures that do not bear his name in any way.

His association with excellence is nonpareil.

As I took leave of him at Freedom Park, Lagos, on that sedate evening, I could not but marvel at the frightening humility of Alhaji Abdulazeez Chivuzo Ude. 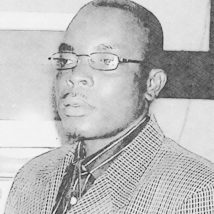