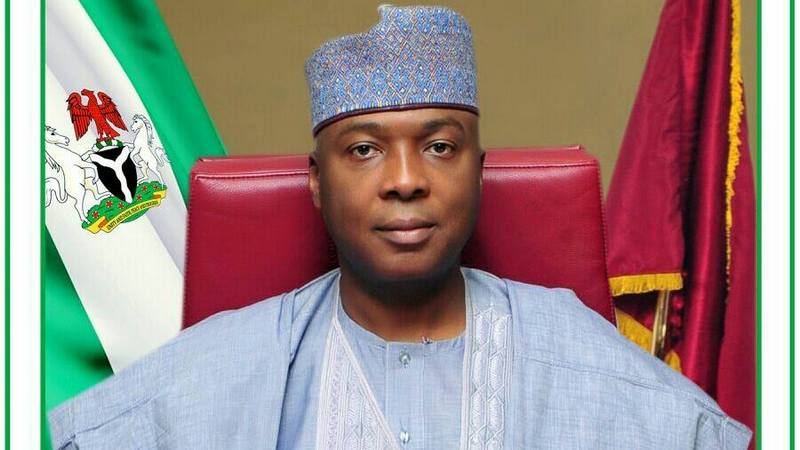 People like Bukola Saraki, the hugely compromised and controversial Senate President, believe that Nigeria is perpetually indebted to them. How he and his likes came about that ingrained entitlement mentality beats me. How they had come to the conclusion that Nigeria owes them baffles me. Considering that they have taken more than the fair share of the national cake, this mentality should be the other way round because the country has suffered precarious hemorrhage to meet the elephantine cravings of the Sarakis and their ilk who have come to believe that the country should serve the and them alone. The Saraki family history speaks of long years of predation which the country had borne. The Bukola Saraki case is more confounding! Here is a fellow who has been living off the state for the better parts of his life, a person who has appropriated several high political offices and dedicated them to the service of self and self alone.

Perhaps what has helped Saraki to maintain and deepen his stranglehold on the country’s political space is the moral bankruptcy that encases his political career. Saraki is a moral invalid who cares no hoot about the morality of his ambition so long as it will eventually offer a bounteous reward for Bukola Saraki. He makes no pretenses about being a moral cripple that holds fast to the belief that the end justifies the means. Nowhere is this moral bankruptcy so displayed than his surreptitious conspiracy with the desperate opposition to steal his party’s senate presidency and trade off the Deputy Presidency of the Senate to his cahoots in the process. When his party was still in a meeting to iron out issues relating with the Senate presidency, Saraki rallied the minority opposition, cheekily gave them the deputy presidency of the senate and took the senate presidency. Helped by President Buhari’s lethargic attitude to who emerged the senate presidency, Saraki rode roughshod over his party which dithered as the situation demanded a clear-cut action to quell Saraki’s insurrection and instill discipline within the party.

If Saraki’s means of stealing the senate presidency was abhorrent, his efforts to hang on to the office despite a plethora of serious criminal and corrupt indictments is noxious. It was obvious in the past three years of Saraki’s headship of the senate that he can do anything to hang on to office. He had dragged the senate to its lowest nadir in reputation as the visage of a senate that closes plenary to accompany Saraki to his many shameful court trials marks an all-time low for what should pass as the hallowed law-making chamber of any nation. Saraki ferociously fended off every effort to call his non-existent moral hue to action as the senate became the butt of the scorn of perplexed citizens who were at a loss to reconcile Saraki’s obdurate hanging to office with the lofty demands of the senate presidency. With the belief that all is fair in battle, Saraki ignored every effort to make him see the honour in not engaging in a muddy fight that will reduce the senate in the eyes of Nigerians.

With a plaint, hugely-compromised and ethically rusty judiciary, it is easy for the Sarakis and all those that believe with him that Nigeria could be bent to serve their narrow whims, to walk away from the very obvious indictments that keep stalking them. With a judiciary that excels in descending heavily on petty crimes than on huge crimes committed against the mass of the people, it is easy for Saraki to walk through impregnable indictments and walk away with blue murder, as we keep seeing in the chequered history of Nigeria but then, the Sarakis have come to see themselves as the approximation of the Nigerian state and have often mocked our collective impotence in calling them to order.

But then, in his latest struggle to keep the Senate presidency after walking away from the party that rightly owns the seat, Saraki is charting newer courses in self-aggrandizement and this may sound his Waterloo in his assumed impregnable political life. Saraki recently choreographed the defection of some senators and house of representatives members from the APC to the PDP. He was to follow days later with an announcement of his own defection to the PDP. Despite all his efforts and a generous sponsorship of media misinterpretation of the implications of his action, his new party, PDP, still fell short of the numbers needed to dislodge the APC as the ruling party in the senate. That should have informed him to immediately resign from the senate presidency but he would hear none of that. He wants to walk away with his loot. His new party, so impervious to honour, is urging him on. To them, it is a gangster’s game and the smartest gangster will keep the trophy. What more, Saraki considers himself the smartest thing God created so why won’t he and PDP huff and puff if that will allow them keep the booty?

Let’s briefly recap that extensive smart input Saraki put to his latest antic. He and his acolytes had long been grumbling over being left out in the APC while making noisome boasts of their electoral prowess. As they sensed their game was getting to the breaking point, they sponsored some of their cronies to claim to have founded what they called Reformed APC as a way to create a semblance of fictionalization in APC. That done, they planned an extensive pullout where they boasted that over 30 senators were set to decamp from APC to PDP. They proceeded to make a daily catena of their readiness to defect and when that seemed not to move APC to acquiesce to their clear blackmail of granting them some imponderable concessions, Saraki staged a show. In cahoots with the PDP hierarchy, he organized a defection drama. On the day of the said defection, he and his deputy organizeda scam blockade of their residences. How they managed to evade the so-called blockade meant to allegedly prevent them from defecting, is still whirling in the wind. But the bottom line was that Saraki found himself in the senate where he gleefully announced that 15 senators had defected from the APC to PDP and quickly adjourned the senate for over two months!

Whoever had an inkling of Saraki’s game plan knew that he failed in the coup he wanted to pull off. Saraki was working on at least 30 senators defecting from APC to PDP to give his party the lead it needed to retain him as senate president. It was alleged that he copiously complied the list of over 30 senators he felt were having issues with the APC as his defection list. Even when he announced the defections, the compromised lazy media was put on hand to announce that PDP had taken over the senate and was now in the majority. Like heedless sheep, they did just that but Saraki was not convinced hence he announced a surprising two months’ adjournment even when critical pressing issues were on the agenda of the senate. Believing that time would offer him ideas on how to deal with the issue, Saraki knew that his objective to get a PDP majority needed to retain him as senate president failed and in a desperate bid for time, he had to quickly adjourn the senate for a long period.

But then, even with his failure to twist the majority of senators to the PDP, the shenanigans surrounding Saraki’s so-called fifteen defectors emerged soon after as some of the 15 senators that allegedly defected, distanced themselves from the mess. Some others alleged that they defected to other parties and not to PDP as Saraki’s desperately announced. Again, there were allegations that Saraki refused to also announce the defection of Senators Hope Uzodimma from Imo, Sonnie Ogbuji from Ebonyi and Fatima Raji-Rasaki from Ekiti after these had sent correspondences to that effect. But perhaps, Saraki’s house of cards was to tumble few days after when the Senate Minority Leader, Godswill Akpabio announced his defection from PDP to APC. That was enough to burst Saraki and PDP’s bubble and finding that they didn’t realize their original aim of swerving the Senate to a PDP controlled senate, they now focused on adopting quite bizarre tactics that are rooted in scare mongering and putrid blackmail to ensure they retain the senate leadership even when they are in clear minority.

What is curious is what made Saraki and PDP think that APC will sit idly by and watch them steal the senate presidency. If indeed there is no honour in the game and all those that are preaching to Saraki to resign on moral grounds are wasting their time, as they oft say, what makes them think that APC will submit itself to honour in removing Saraki? If Saraki and PDP feel they are the smartest gangsters that have succeeded in robbing the senate presidency, what makes them think that APC will restrict itself to the realm of morality in removing Saraki? If Saraki and PDP feel that all is fair in war, what makes them think APC will buy their naïve efforts to reduce the issue of removing Saraki to what is moral and not what is practicable? How can a Saraki that forged senate rules to steal the senate presidency and who was elected by only 57 senators think the APC will shackle itself and wait till all the 109 senators have convened to remove Saraki?

Saraki and PDP know that it is a clear aberration to allow them to retain the senate presidency when they are in the minority. That is where many are appealing to Saraki and PDP’s non-existent honour and morals which is like pouring water on stone. So APC must do everything possible to remove Saraki since he feels it is a gangster’s game. So from whichever angle one looks at it, Saraki is crippled from continuing as Senate President. Constitutions in developed countries are usually not voluminous because everybody in such societies know what honour, morals and integrity are and play by the rules. Every game has a rule and in legislative institutions, the party that commands the majority of legislators control the legislature. It is often not written but well accepted and hardly violated. Perhaps after the removal of Saraki, this will become an integral part of our constitution since Nigeria is a smart haven and whatever is not written down is not adhered to. Saraki must be taken down since he can’t muster the integrity, morality, honour to resign. That same Doctrine of Necessity that made Jonathan Acting President must be invoked to remove Saraki who wants to relocate to another location with a stolen crown.

I see clearly the end of the charmed Saraki political exploits. The cloud is thickening, the tempest is gathering and what a way for Bukola Saraki, the smart political player to end his unfurling rich political life if he is to be removed in a shameful and disgraceful manner because he lacks the moral capacity to do what is right.