Ekwueme At 75: Time For Statesmanship

For some time now, I have tried to contain my angst against the activities and rudderless, missionless and visionless political drift of the former Vice president, Alex Ekwueme, which, at best has been bereft of mission. Ekwueme’s rudderless politics is eliciting angst and opprobrium not only amongst the Igbos that have never gained anything from his vacuous political oscillations but also other Nigerians that are scandalized by the withering political value of the man. The other day, I saw an advertorial signed by Ekwueme and, you wait for it, some of the mandarins of the eastern wing of the PDP on sharing of offices by the South East wing of the party and you need to see the people with whom Ekwueme’s name was lumped in that advertorial. That was when I concluded that Ekwueme has really gone haywire. The fact that there was no reputable politician that shared that space with Ekwueme and you begin to wonder what that man makes of his image as he wanders so vacuously on the political space. Does Ekwueme really have a political destination or is he just a wayfarer that stumbles and fumbles his way through the political landscape? 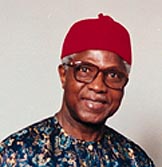 To the extent that Ekwueme has now assumed the demeaning role of the dottering nanny of the PDP, I am going to look into the tragedy Ekwueme’s politics is especially now that he is running around the country on one of those elusive assignments that neither bear any meaning to Igbo interest nor enhance the political pedigree of Ekwueme himself. Considering that it was when he was on a similar mission for Abacha that late S.G. Ikoku died on the road, there is every need to let Ekwueme know that it is time for him to go home and start playing the role of an elder statesman than playing such demeaning role as the one he is now doing for PDP, which obfuscate Igbo interests and deprecates his worth as they last.

In fact, I had wondered who reconciled with Ekwueme before he was given the role of reconciling other aggrieved members of the inchoate band of opportunism called the PDP. I wonder how a politician feels he will never have any axe to grind with his colleagues who have found it so fashionable to ridicule him in the public glare and always exhuming him to serve their self-serving interests whenever it suits them. No one has been as wronged as Ekwueme in the PDP but no one has demonstrated an abject lack of guts to protest his poor treatment than the former Vice President who is ruled more by pitiable self-interest than the general welfare of Ndigbo as he careers through his very unclear political lifestyle. I strongly believe that no politician needs reconciliation within the PDP more than Ekwueme. It is a pity he does not see the need to get angry with those that always ridicule him politically and here lies the tragedy of Ekwueme the politician.

From an anonymous background, the buccaneers in the NPN exhumed Ekwueme as a perfect compliment to their plan for a laisez faire type of government that needed no strong restraint as it lasted and he never disappointed. He opened not his mouth as the brats of that era like Umaru Dikko, Ibrahim Tahir, Suleiman Takuma and many others castrated his office and rendered him perhaps the most powerless elected Vice President that has trod the political space of this the country. He secured nothing for his Igbo stock, as he merely existed as the nation’s Vice President and never raised a voice of caution as rascals and ramparts from the North ran rings around him. He was content with the tag of a ‘loyal Vice President’ that never interfered with the nefarious obtrusiveness of the mongers his master ringed his regime with. The little spurt of life that oozed from Vice President Ekwueme was his feeble attempt to recruit Igbo political renegades into the anti-Zik campaign, in Igboland as espoused by the South Eastern wing of the NPN.

With the ouster of the Shagari regime, he retreated into his cocoon and made one or two darts that were meant to shore his political relevance as the whirlwinds of militarism raged. Against sound reasoning, he elected to go into the fortuitous Abacha political conference. His best moment was when he headed a group of mostly estranged collaborators of the ravaging military to write a letter to the then despot, Sani Abacha, dissuading him from going further with his plan for transmutation from a military to a civil leader. That letter was celebrated beyond its worth and this worked wonders for Ekwueme as Abacha dropped dead shortly after. Warming up to the borrowed robe of the leader of the fight against the Abacha dictatorship, as the sullied military that were strategizing for redemption, would want Nigerians to believe, Ekwueme fancied himself as the next President, even as he never knew that this was not possible with the state of affairs in Nigeria then.

But the dysfunctional democracy we were saddled with after the death of Abacha was to expose the real person of Ekwueme. Soon after he was worsted by the PDP in Jos, he resisted the pressure from his Igbo kinsmen to denounce the party and use the only instrument open to anybody that is so badly treated in such exercise and damn the PDP. This however, was not for Ekwueme as he rather positioned for the expected crumbs that would accrue from his ill-appreciated support for the PDP. In the two PDP presidential primaries, he was intentionally exposed to ridicule by the party’s decision to snub his candidacy and manipulate the process to deny him his cherished dream of hoisting the banner of the PDP in the presidential election. On both occasions, he sullied home, bruised and humiliated. He however had no guts to take his fate in his hands and put his political value into use, force the party to the bargaining table and get something out for himself and his kinsmen that bought into his tentative presidential dream and afford for himself a better and more respectable political niche. This feckless disposition was easily deciphered by the Obasanjo government hence the willful attempt to rubbish the man and whatever he stands for in the nation’s politics, at any chance the opportunity flees by. To Obasanjo and his PDP, Ekwueme was just a feckless relic or an impotent totem that is excavated at will and sent on one meaningless and rudderless mission, as a form of appeasement and no more.

If he ever felt it, he never betrayed it which made his traducers to heap more insults on him as the game of long knives in the PDP unfolded. As this happens, his Igbo kinsmen, who built their native support into Ekwueme’s political mission, are left high and dry as Ekwueme runs after the morsels that are always flashed to his face to appease a mild totem. What better way to ridicule Ekwueme than to recruit a brood of street toughs, confirmed felons and roughnecks and hand Anambra, Ekwueme’s state, to them; to do as they wished. Thus Anambra became the rolling stone in the political chessboard of the people Ekwueme tagged along with when he would have began playing a higher role as a statesmen, with a market value that is priceless.

As Anambra was subjected to the most demeaning strafing, different voices rang out in protest. From his sickbed in the , Chinua Achebe spoke against the reign of terror visited on Anambra by Obasanjo and his remorseless goons and he even threw to the pigs a national honour that was given him by Obasanjo. Odumegwu Ojukwu spoke, Cardinal Arinze spoke, all known leading lights in Anambra spoke but Ekwueme never uttered a word about the degenerating situation in Anambra. Whenever he forced himself into national limelight at this period, he was either visiting Aso Rock in quaint solidarity or carrying one demeaning assignment for the Obasanjo government or the PDP who found it expedient to retch up one worthless task or the other to keep Ekwueme busy, even when he knows nobody meant to take him serious.

For Anambra, Audu Ogbeh, as the National Chairman of the PDP, stuck out his neck to denounce the devilish machinations of Obasanjo. For this, he elected to quit his job as PDP chairman and left the court of pharaoh with his honour intact. Is it not ironical that Ekwueme is being commissioned again to reconcile Ogbeh with the PDP, where Obasanjo sits as life leader and that so far, Ogbeh has told the PDP to go to hell? The much we heard about Ekwueme, as the grand political larceny that swept through the country in April 2007 unfolded was that Ekwueme was one of the few leaders in Anambra who aligned with the grand parody that produced Andy Uba. He backed Uba because Uba has the price for ’s former Vice President. What a shame!

Ekwueme does not see the need to protest the humiliation he has been receiving in the PDP when Sunday Awoniyi, Iyorchia Ayu, Solomon Lar, Yahaya Kwande, Lawal Kaita, Dubem Onyia, and so many others have left that circle of dubiety. What more, Ekwueme has been commissioned to reconcile them back to the party when no one has actually sought to reconcile Ekwueme with a party he played pivotal role in finding but which has treated him lesser than a scum? For this an elder that was supposed to sit at his house and receive homage from younger and less fulfilled politicians, has been kept on the road, to carry the loads of shit intentionally excreted by Obasanjo, on the pretext of reconciling those that were man enough to opt out of the theater of vice PDP became under Obasanjo. This shows that Ekwueme has no asking price and there is no greater tragedy in politics than a politician that lives at the pleasure and behest of others. He stands for nothing and has no destination except satisfying his stomach and that is why Ekwueme can condescend to being a campaign manager of a virtual manservant like Andy Uba in the last sham election just because he gave him some car gifts and that is why Ekwueme allowed his name to be bandied together with that of somebody like Tony Nwoye, the head thug to Andy Uba in the guise that he was distributing ineffectual positions in South East PDP when he never uttered a word on why the Igbo was not deemed for any worthwhile position in the present dispensation and Ekwueme did not see the need to lay even a mild protest.

Luckily enough, Ekwueme has become a relic of the most unproductive politics an Igbo man has indulged in and with little or no asking price, he remains very ineffectual in the present Igbo fight for liberation but then, one would have fathomed Ekwueme, now approaching eighty to be one of the statesmen that are on high demand by generations wishing for a transition from a disappearing order to a new generation. Sadly he doesn’t see himself as such, which is why he is still on the road, always warming the waiting rooms of Aso Rock and cheapening himself with people who ordinarily would not have earned a handshake with him. One wonders when Ekwueme will start being a statesman. I wonder and I know many are wondering when that time shall come.