For about two hours, the ever quiet and serene International Conference Center, Abuja became rowdy and excessively noisy. Even the army officers on guard had to look around to ascertain the security status of the continental monument. It wasn’t a Boko Haram invasion or a political rally; it was a noisome pestilence emanating from the hall where the first Regional Education Summit on HIV/AIDS in Africa (RESHAA 2011) youths pre-summit was taking place. The participants weren’t fighting over foreign funds, no, their argument was centered on a tiny object that has been described as the best discovery since the discovery of the virus itself – condom.

Several decades after the diagnosis of the first HIV/AIDS case in Nigeria, the nation still gropes under the heavy impact of the virus and terminal debilitating disease. With the billions of dollars that have been expended on both brilliant and silly control and prevention initiatives, Nigeria still ranks second in prevalence on the continent, second only to South Africa a nation that the president allegedly said that the virus could be washed away with a warm bath.

Apart from being figures away from total ignorance, Nigeria’s HIV/AIDS data is highly questionable and contested. For instance, there are several loopholes in the flow of diagnosis information. Many Nigerians secretly go for unrecorded diagnosis that aren’t part of the data that the health authorities have, and an alarmingly high percentage of the citizenry still dread the deadly virus and choose ignorance over potential stigmatization. Furthermore, there is no reliable mapping of the spread of the virus. Hence it could be conclusively said that if Nigeria still ranks high with the limited data available, extrapolating all parameters and infusing these and several other shortcomings could evidently put the incidence rate of HIV/AIDS in Nigeria slightly or much higher than what the nation currently has. It might overshoot South Africa’s.

HIV/AIDS has therefore been an ever-lucrative governmental/non-governmental project to pursue with guaranteed foreign assistance. Nigeria has so many HIV/AIDS related initiatives. They include NACA, SACA, LACA, SFH, APIN, ARFH, ENR, GYCA, UNAIDS, USAIDS, UNICEF, UNFPA, GHAIN, NECAIN, PEPFAR, MEPIN, SPDC, FHI, NPLWHA, NYSC PET and several others. These agencies, clubs, associations, organizations, groups and societies perform (or claim to) different roles that their grant statements often describe as being central and vital to the fight against HIV/AIDS.

It is therefore a faulty and highly nebulous assertion to say that paucity of funds is a major challenge here. The major challenge in Nigeria is lack of realistic implementable policies. At every medium and intellectual gathering that Nigeria’s HIV/AIDS experts gather to iron out the various bottlenecks in the nation’s HIV plan, the resolutions are always excellent…on paper because they always fail to tackle the major issue that presents Nigeria as a lucky unserious nation. The strongest of such is the evident double standard.

At the event mentioned in the opening paragraph, the stakeholders including representatives of the federal ministry of education, UNFPA, UNICEF and several others reiterated their commitment to continue the current abstinence/no condom campaigns in primary and secondary schools and safe sex with condoms in higher institutions. This is in order to preserve the nation’s cultural and moral sanctity.

This position further highlights the information gap and lack of closer proximity of these agencies to the population that is worst hit by the virus, the youths. It isn’t inappropriate to say that Nigerian youths currently have higher-than-usual libido no thanks to the advent of internet, an avalanche of pornography in different formats and indigenization of foreign cultures and habits. Free social networks now make booty calls easier to make and educational imbalance, landmark failures in examinations, NUT strikes and other Proudly Nigerian youth woes provide long periods of joblessness that could be used to pursue secret inguinal agenda.

Unlike the good olden days when the proverbial eyes were still on the knees, the youths of nowadays know a lot, more than the elders can ever imagine. At a tender age, they are exposed to informal sex education and they often have first experiences, out of sheer inquisition. Hence pretending that the youths shouldn’t know about sex is telling the hot water to pretend as if it doesn’t know heat.

During a HIV/AIDS awareness campaign in Calabar, a secondary school student approached the facilitator and asked for some condoms. The person in charge refused based on the current Nigerian HIV/AIDS policy which prohibits the ibution of condoms to school children. The boy however begged the team claiming that he often re-use nylons and modify cellophane bags as condoms. The situation is the same at the grassroots across the nation. Out of the millions of Nigerian youths, hundreds of thousands of them are teenagers and underage who are sexually active. They’ve already eaten the forbidden apple yet the government is claiming that they shouldn’t use condoms since they are too young to have sex, but old enough to contract HIV/AIDS.

Religious Dimension
As a member of the panel of discussants on the subject of what should be done to tackle the menace in Nigeria, my position on the matter met a stiff opposition from the representative of a joint faith committee on HIV/AIDS from Borno state. He argued that removing the option of condoms is the best. As a religious nation, he claimed the churches, mosques (and shrines?) ought to be supported by the government to exploit the religious dimension and preach total abstinence which is morally and spiritually right, and happens to be the best prevention method for HIV/AIDS.

But religion has been one of the major undoing of Nigeria. Most of the crises in Nigeria have religious undertone. Thousands of lives have been lost, millions homeless and destinies changed forever because of religious misconceptions. Just as every religion preaches peace yet peace remains elusive in several Nigerian cities, it is in the same vein that abstinence is preached yet many members of the congregation are sexually active. But despite this anomaly, churches and mosques have the sacred obligation of promoting holiness, purity and abstinence. The cue of the government is however a matter of utmost concern.
Fighting AIDS or Fighting Sex?
Although school children are told to abstain from sex, they are not strongly prohibited from purchasing condoms in shops and retail outlets. Unlike the religious leaders that have the moral obligation to preach abstinence, the federal government, state and local governments are not the custodians of religious beliefs; they are required to keep everyone safe irrespective of personal beliefs, religious affiliations and moral obligations.

It is only criminal acts that the government should not support and according to the Nigerian Constitution, coital activities aren’t on the same pedestal as hard drugs possession and other crimes hence sex isn’t illegal. Therefore everyone having sex should be protected by the government which is required to make information freely available and individuals should be allowed and guided to make free choices.

No research study has shown that if youths use condoms, they are at higher risk than the adults. So, the sexually active ones shouldn’t be denied condoms. Those in charge of formulating and enforcing HIV/AIDS policies in Nigeria should realize that as long as there is increasing incidence of underage pregnancies, the school students aren’t immune against contracting HIV/AIDS.

The decision to abstain from sex is a personal one. President Goodluck Jonathan,

Vice president Namadi Sambo, Senate president David Mark and every political officeholder in Nigeria put together cannot ban anyone from having sex. And as long as this is impossible, the best they can do is to make sex as safe as possible.

Safer Sex
The popular limitations of current latex condoms could be addressed by massive investment in nanotechnology. With this technology, contraction of HIV/AIDS via condom usage is next to zero. However, religious machineries militating against the project are claiming that with this kind of condoms readily, freely or cheaply available, sexual promiscuity will go unabated. They have a strong point, but they’ve totally digressed away from the major reason why the nanocondoms are needed which is to fight HIV/AIDS.

Confusing and conflicting roles in the fight against HIV/AIDS in Nigeria as a country and the world at large have been counterproductive. Ideally, the social and family structures are expected to train up a child in the fear of God and instill good morals that would enable the child to decide personally to abstain from sex without the pastor dissipating energy or the government banning condoms. Likewise, scientists are expected to provide means of protecting everyone irrespective of their moral values and social statuses.

However, everything has been muddled up. The same government that is trying to fight HIV/AIDS using every available means which include condoms is also acting like the bullying overprotective father who wants to compel his children to stay away from sex until later in life. But like the various experiences of children with such fathers, their interest in the forbidden fruit grows with every stroke of the cane and warnings. And with the greatest of all influence, peer influence, the child that’s been in the dark often gets to see rays of light and seek to explore. The aftermath is a booming rate of underage HIV infection due to insufficient information on how to play safe.

At the end of the rowdy session described earlier, participants visited the stands of the partnering organizations. At the USAID stand, a secondary school student asked for some educational materials and condoms. He got the books but wasn’t given the rubber. He went to his friends and they devised an ingenious means to overcome the obstacle. They removed their school uniforms and wore muftis. They posed as undergraduates and rejoined the long queue of those waiting in line to get free condoms. When it finally came to their turn, they got all the condoms they wanted.

Who are fooling? Ourselves of course. Happy 2011 World AIDS Day. 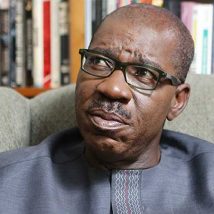 For Health to be Wealth in Edo: Obaseki to the Rescue