When the nominations for the Caine Prize were announced, in Nigerian literary circles, there was the sense of SA who? Ike Okonta, the other Nigerian nominated was fairly well known to the Nigerian audience but SA Afolabi was more of a challenge. Old? Young? Male? Female? No one seemed to know. Nevertheless as tends to be the Nigerian way, everyone embraced this “unknown” Nigerian who was doing us proud. I know that at this point you had been widely published and had been writing for 10 years. Did you resent that perception of SA who?

Not really, but at the same time I didn’t understand it. The Caine Prize is a short story prize, not one for a novel, so naturally one doesn’t have to have had a publishing background/history – simply just one published story. I myself think it’s refreshing to hear of new voices, be it in literature, film, music, anything. I only discovered after the award that I was the only one shortlisted who hadn’t had a book published. In a way, that’s a shame because it seems to suggest that to be shortlisted you have to have some sort of impressive writing portfolio or pedigree. 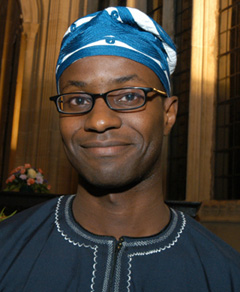 That said, for the benefit of this audience, who is SA Afolabi?

All your previous work seems to have been published under SA Afolabi. The use of initials only seemed to heighten the mystery. Was this a conscious decision on your part?

When I had my first story published in the London Magazine all those years ago, I thought briefly of what other writers had done: use pseudonyms, initials or their own names. I simply chose the middle option and it stuck. I never realised people would find it confusing. However, I’m publishing under my full name now – just seems simpler somehow.

What was it like, first being short listed for the Caine Prize, then touring the UK with the other short listed writers, and finally being announced the winner? Could you share the highs and lows of the experience?

I received an email in April informing me I’d been shortlisted. That was the first I’d heard of it. There was an initial period of bafflement and of course pleasure. I didn’t know who had entered the story and went on to ask my editor and then my agent whether they had done so. I didn’t discover until a few days before the award ceremony, that it was the editor of Wasafiri, the literary journal where Monday Morning was first published.

I was initially apprehensive about the touring part of the programme as I’d never done anything like that before, but meeting people from different parts of the country proved educational and enjoyable and I was most impressed at the professionalism of the other writers on the shortlist.

Not accustomed to being in the limelight, I was nevertheless grateful for the opportunity to be on the shortlist and to have the experience of meeting people and talking a little about writing and other subjects. Even at the award ceremony in Oxford, which was nerve wracking enough, I just wanted to sit back and enjoy the evening, watch the winner go up and deal with the pressure and all of that, and then return to London later that evening. So when my name was announced, I was completely thrown and realised that I would have to go up, give a speech and deal with all the subsequent attention. It has been a steep learning curve, but also very good experience. I couldn’t believe I’d won for several days afterwards and even now it seems like a hazy dream.

Your brief bio released by the Caine Prize seems to span quite a few countries? How did you end up such an ajala travel? And to what extent has this experience of different cultures affected your writing?

My father was a diplomat so we had to move every three years or so, sometimes after only less than a year. In a way I got my travelling done at a very young age and tended to, and still do, view the world in terms of similarities between people rather than differences. It’s made the world seem much small

er to me than perhaps would otherwise be the case – more manageable – and to some extent that’s reflected in my writing. I don’t really feel restricted in what I can or can’t write about.

Your bio says you were born in Nigeria. How long did you live in Nigeria? Whereabouts? And when were you last back?

I was in Nigeria in March this year, on holiday, visiting relatives, travelling from Lagos to Ilorin, Kaduna, Zaria and back again. I can’t add up the years I’ve lived in Nigeria as it’s too complicated, but soon after I was born (I must have been around one) we moved to the Congo, then back to Lagos, then to Canada, then back to Nigeria for two to three years. I went to school in Plateau State for about a year, then we moved back to Lagos where I was at Corona School until we left the country again. I was eight then. After that, it was on and off in Nigeria until I went to university in Wales.

What first inspired you to write? And from which writers do you draw inspiration today?

A lot of writers discover their “vocation” through a love of reading and I’m no different. I was sufficiently intrigued to attend a “writing for beginners” evening class once a week and found I loved it and simply continued, writing longer and longer pieces until a short story formed.

And what is it about these writers work that you admire?

All sorts of things. I admire writing that tackles difficult subjects head on. They might not make comfortable reading, such as work by Naipaul whose thoughts on race are not palatable, but he hasn’t won a Noble Prize for being a writer who pleases. I’ve greatly enjoyed works by Caryl Phillips, Jamaica Kincaid and other Caribbean writers who have explored in greater depth than writers from Africa the experience of the diaspora, which is, of course, of great interest to me. And since many are writing or have written about the experience of different types of exile, be they from Ghana (eg the recent The Second Life of Samuel Tyne, about a Ghanaian family in Canada), Japan or Antigua, this opens up a vast array of writing that is accessible for those of us who have lived peripatietic lives – which is increasingly common these days.

Many contemporary Nigerian (and African writers) now live and work abroad. How meaningful is the phrase “Nigerian writer” or “African writer” within this context?

“African writer” is, I feel, a label for those in the West to lump vastly different people together. “Nigerian writer” is a more useful term, but then again it’s not the same as “Nigerian-born writer”.

From a writing point of view, it’s often easier to write when one achieves a certain distance from something, be it in miles or time. So a Nigerian writer, working abroad, is still a Nigerian writer. At least five of the authors mentioned above write/wrote from outside their country of birth, but one would never consider them anything other than their nationality.

By Nigerian born, are you referring to citizenship at birth or heritage or both? And to what extent has your Nigerianness influenced your writing, if at all?

I’m not sure it’s helpful or meaningful to try to classify what a Nigerian or an African writer is. By Nigerian-born I simply mean just that – born in Nigeria. Everything is relative, though. Say someone with Nigerian parents was born in New York City. They might be fiercely proud of their American identity, as are most Americans, and cling to that American label. Someone else born in the exact same city might always refer to themselves as Nigerian first and foremost, although they carry a US passport. Who’s to say which one is correct?

There’s always something about Nigeria or the Nigerian background in my writing. Part of my sensibilities are shaped from there: the way I hear language, a sense of economy (such as not using too much water or electricity because of the fear that they will run out), the childhood memories that are vital to us all.

Your winning short story was about a family of refugees negotiating their way, their lives as individuals and as a family in a new place with ways strange, unfamiliar and often harsh. What inspired this story? I ask this conscious that in the UK elections in 2005, the question of refugees, asylum seekers and immigration generally was an emotive one.

Well, I wrote the story several years ago and I’d been influenced by news reports of atrocities in various parts of Africa. I wanted to take the reports further, and make something very cruel and unacceptable more personal and familiar – the idea of a family undergoing difficulties and trying to overcome them. I think many people tend to view refugee families simply as refugees, without the complex lives we all live. I wasn’t really attempting to offer a different viewpoint for people – I simply wanted this family to tell me their story.

On winning the Caine Prize you were quoted as saying that the Prize money would buy you a year off work in order to write. How have you coped with the challenge of balancing the tension between needing to work and also needing to write?

Not so well – I have to drop the writing in order to work and I’ve found that very disruptive. I used to write in the mornings before going to full-time work, which is a better way to write, I’ve found, but the pace is very slow.

Your bio also says you used to work for the BBC. What was that like? Particularly as the BBC and other Western media have often been accused of painting a particular “stereotyped” picture of Africa?

Well, the BBC has always been accused of being “hideously white” and that is very often the case. But in my last job there were three Nigerians and a West Indian in my office, which was very unusual in my experience and encouraging.

It’s true, the media does tend to focus on the negative aspects of Africa, but then the news in the West is very negative too. Listen to the Today programme in the morning on Radio 4 or open a newspaper and it isn’t going to cheer you up. I tend to skim the news websites for more interesting stories, such as the Nigerian woman at Oxford or Cambridge who is constructing the world’s most powerful telescope. I’ve asked other people about this and nobody seems to have heard this story, yet it’s important. If she’d been a cleaner and had broken the telescope accidentally then perhaps that would have made the headlines.

Ike Anya is a Nigerian public healh physician and writer currently based in the United Kingdom. Founding Secretary of the Abuja Literary Society, he is co-editor of The Weaverbird Collection of New Nigerian Writing to be published by Farafina this year. His poetry, essays, and short fiction have been published in the UK, Nigeria, America, and India.

Ike Anya is a Nigerian public healh physician and writer currently based in the United Kingdom. Founding Secretary of the Abuja Literary Society, he is co-editor of The Weaverbird Collection of New Nigerian Writing to be published by Farafina this year. His poetry, essays, and short fiction have been published in the UK, Nigeria, America, and India.