One of the challenges of living in a mega city such as Lagos is the pain and suffering Lagosians endure as they move from one location to another in a city choked with human and vehicular traffic. For a new comer to Lagos, (‘JJC’ in popular parlance), ability to jump on and off a moving ‘molue’, ‘danfo’ or other mass transit buses is one of the most important survival skills. Also ranking in equal importance are blessings and favour from the gods, of the good fortune of surviving a ride on a Lagos commercial motorcycle, popularly known as okada. 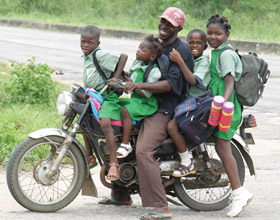 The public transportation challenge may not be peculiar to Lagos alone, as London with many years of organised rail and public transportation experience stills falls short in some regards, perhaps in a different and envious manner compared to the Lagos and Nigerian capital cities’ examples. Daily media reports in the U.K of ‘tube commuters miseries and woes’, ‘chaotic train timetable disruptions’ e.t.c suggest that the City of London and the U.K government still struggle to meet the transportation needs of an ever growing population.

For many Lagosians, riding daily on okada is an unavoidable part of their daily routine as only the ‘kings of the road’ have the daredevil DNA to waltz, dash, slide, ride and manoeuvre their way through the thick Lagos traffic. Their door to door service offering and cost effectiveness also sets them apart from other public means of transportation. This comes at huge costs though. A visit to the National Orthopaedic Hospital, Igbobi, Lagos and other hospitals in Lagos will reveal sad stories of young lives cut short, or maimed for life by the carelessness and sometimes overzealousness of the okada riders who obey only one law, that of the urban jungle which ‘accords’ them right of way in every traffic situation. For Lagos okada riders, patience is a relic word, now extinct like the dinosaurs.

There are reports that some state governments such as Cross River state, Imo state and the FCT administration have since banned commercial motorcycles in their state capitals. Perhaps, Lagos presents a peculiar challenge thus making wholesale ban of the okada impossible without the government adequately providing for easily available and other cost effective alternatives. The Fashola administration should be praised for its various strides in the area of improving public transportation through the provision of BRT buses and other initiatives but such efforts seem like drops in the ocean when juxtaposed against the millions of commuters that require public transport services to their places of economic activities every day in Lagos.

In Lagos, as in other cities, okada rides are for the rich, and the not-so-rich including school children who have now resorted to doing balancing acts seated 4 or 5 on an okada on a daily basis to and from school, a heart wrenching sight to behold. Okada rides are no respecter of persons and are not a determinant of one’s socio-economic status. Professionals, ‘big boys’ and ‘big girls’ alike have since joined the okada revolution. For many, the okada has become a ‘life saver’ helping them to keep vital appointments. A friend once took an okada from Funsho Williams Avenue to the Murtala Mohammed International Airport when it became clear to him that continued stay in his car which was stuck in the evening traffic would have meant missing his scheduled flight to London.

If you live and work in the Victoria Island area of Lagos, you may have discovered that the fastest means of moving around on the island is with okada, else you risk coming late for meetings and appointments. What many professionals working on the Island do, including yours truly is to park your vehicle at either Mega Plaza for a fee or in any other location and then flag down an okada to take you to your destination on the Island. A few survival tips may suffice here if you intend to arrive alive with your bones intact.

As a rule, I am always conscious of the person driving the okada I am about to hop on. I tend to favour mature okada riders who appear to have families; my thinking is that they will be more careful. The ones to run away from are those ones that look barely in their teens. Ride with them at your own peril, this is not helped by their very poor grasp of ‘Pidgin English’, with such CV, expecting them to read, understand and obey traffic signs becomes a tall order. It is important to adopt a master-servant role during the ride, and this is for a reason. Having been variously bashed, bruised, brushed and crushed by crazy Lagos drivers, your typical okada rider is an accident waiting to happen; their mentality has since turned to that of a victim hence the band of brotherhood they exhibit each time a fellow rider gets into an altercation with a car driver.

It is important that you attempt to control the mind of the okada rider even before you settle on his worn seat. How do you do this? You tell him clearly where you want him to take you to and agree fares upfront; ask him again to be sure he understands. Next natural thing for him is to zoom off with you in tow, but that’s where the control begins. It is actually within your powers to tame his ‘madness’ by telling him that you don’t want him to drive you to early death. You will be surprised that they will respond and slow down a bit, follow this up with an instruction to please not exploit every opening on the road as it is your head that may get crushed by the trailer. You also don’t want to climb on an okada that the driver has already twisted the handle as this makes balancing during manoeuvres more difficult.

Riding in a Lagos okada is like riding a crazy horse, even at that, crazy horses can be tamed, even if momentarily. Chances are that the okada rider will yield to you (he needs the money), if not, it is still within your rights to ask to be let off; afterall it is your life at stake. Remember that okadas are like trains, if you miss one, you can catch the next.

While we hope for better and improved public transportation system in all our cities, we will continue to patronise okada riders which are much hated but needed at the same time. Perhaps a programme of public education on basic traffic laws, health and safety etc for commercial motorcyclists in Lagos and other cities may be an interim measure to curb the risks that okada riders pose, for the average motorist who must now worry about not knocking the lawless okada rider down, and the wider society in general.

Abia state is in the news, for the wrong reasons again. It appears there is no end in sight to the troubles and woes of residents of the state...