The primary responsibility of government is to secure life and property through the instrumentality of law and order. It is a known fact that men and women develop and imbibe the culture of respect for the life and interest of others differently and in a vastly differing manner. There are those who believe in the sanctity of life and there are others who have murderous instincts and would not mind killing or terminating lives for the fun of it. In between these two sets of people is the sovereign who is the donee of the people’s or put in a clearer language the society’s power to reward its law abiding ones or punish and deter the criminals or deviants within its fold. Those who talk about a social contract between the political authority holder (sovereign) and the people are actually referring to the undertaking of the sovereign to secure, promote, develop and if you may facilitate the healthy and progressive growth and development of the citizenry (and in modern times the national population which includes non citizens as well) on the one hand and the pledge of the nationals to respect the authority of the sovereign upon substantial performance of his duties. Unlike other forms of contracts which demand concurrent respect for the obligation and powers of the parties, the social contract only obligates the people to respond to the performance of the sovereign. This makes sense. Having empowered the sovereign (which by itself means the collective relinquishment of some of their several pre-societal powers), it is imperative for the sovereign to prove himself or herself worthy of the national’s trust in him or her. 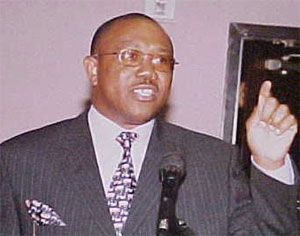 This theoretical ideal is ably actualized in the 1999 constitution of the Federal Republic of Nigeria. The constitution emphasizes that government and all institutions of authority in the country and its various constituents are established for the purpose of promoting the good government and welfare of all persons in the country on the principles of Freedom, Equality and Justice, and for the purpose of consolidating the unity of Nigerians. Because of its nature, the country is federated and physically divided into thirty six states and a Federal Capital Territory.Anambra State is number four on the list of the thirty six states that are supposed to collaborate with the Federal Government in catering for the needs of Nigerians. Therefore, from the commencement of this republic, Anambra State was supposed to continuously have a people’s elected Governor who is vested with the execute powers of the state. Meaning that as from May 29, 1999, the responsibility of executing and maintaining the Constitution as it relates to Anambra State, and the execution or administration of all laws and policies of Anambra State is that of the Governor. It shall be his responsibility to maintain law and order. This simply means that it shall be his job to ensure that criminally minded people resident in or visiting the state are controlled and contained within the ambit of the law. In a lay man’s language, as from May 29, 1999, it became the primary fault of the Governor of Anambra State for anybody to lose his life or property to a criminal or criminals in the state. By this arrangement, the lives and properties of the people of Anambra State are literally in the hands of the Governor.

Unfortunately for the people of Anambra State seven years into this republic they are yet to have a Governor with a sense of responsibility and ability to protect life and property in the state. The first Governor the State had, one Mbadinuju, was a political embarrassment of the worst kind. As it later became obvious, he was not the elected Governor but one foisted on the good people of the State by some Godfathers who saw the office as a veritable and lucrative investment. Knowing his treacherous route to the office, and aware that he was not the people’s choice, he established a private militia to war on both perceived and real opponents. He was also to fall apart with his sponsors and that made him excessively ruthless and murderous. When he was eased from the office, many of us had hoped that his successor would return the state to the path of sustained growth and development. That was not to be. His successor also came into office via the route of Mbadinuju. He was foisted on the people of the state by One Chris Uba who swore to the whole world that he single handedly handpicked the entire political office holders in the state. He had expected a handsome prize for his astonishing feat but Chris Ngige whom he crowned and installed as Governor reneged on their agreement and hell was let loose on the people of Anambra. Between the two Chrises the number of people they murdered is uncountable. By the time the Court of Appeal upheld the ruling of the Elections Tribunal and put finality on the fact that indeed it was Peter Obi that was actually elected by the people of Anambra State, they state had become so militarized that it is unimaginable to think that another state in the country could surpass it in the preparedness for violence. Literally, Onitsha and its environs have become war camps.

The love of democracy and justice had however given us the hope that Peter Obi would stamp his authority and wrest power from the evil clutches and return the state to the path of accelerated progress. But it seems that he does not have the requisite nerve and verve to rule the state. Peter Obi has virtually turned over the sate to the elements and the sad story of anarchy has again taken over the driver’s seat in the state. Unless he does some thing fast and concrete to prove other wise, the recent events in the state have shown very clearly that Peter Obi is weak and may not after all be the much awaited messiah for the state. Agreed the evil forces that do not want him to have a strong political base to contest and retain power in 2007 may be at work, but the truth is he, more than his two predecessors, stands in a better place to exorcise the ghost of violence and anarchy from such a good state as Anambra. No state can afford to toy with its security at electioneering times like this. With such nervelessness, violence mongers would make the state ungovernable and of course make elections in 2007 to be won with bullets and not ballots.

Anambra has made immense contributions to the civilization and development of this country. It has produced some of the most outstanding intellectuals that the black race has contributed to global civilization. It has contributed to the national project some of the finest politicians and statesmen that this country can boast of. If the Ibo nation is rated so highly in industry and hard work, the contributions of Anambra State standout impressively. One easily recalls the role of Onitsha to the Home Video revolution to make an irrefutable case for the ingenuity of the good people of Anambra State. This is why I feel hurt that all of the opportunities inherent in the hard working culture of the people of the state are needlessly lost to violence and anarchy.

Of course it is easy to see the hand of ungodly outsiders whose motives are obviously ignoble in the Anambra crisis but I will want to vote for the resolve of the people to take their destiny in their hands. Peter Obi must take bold steps to reverse the ugly trend. He must rule and in that case he must be firm and decisive. If he continues like this, he would worsen the situation and literally handover the state to bandits. In a word he must start governing the state.