I was one of the first columnists in this Forum to fly a kite that Ngozi Okonjo-Iweala coming from the South East, and being a young woman of distinction and one of our best Ministers of Finance in all of our History, is a good presidential material any day. I still hold that view to be self-evident today, and I am persuaded that if Obasanjo truly loves Nigeria more than himself, and if God is really speaking to him like he often professed “ex cathedra”, he should have realized by now, that prolonging his tenure was the wrong way to go. He should simply have stood firmly behind his great Chancellor of the Exchequer, and let the whole nation know he is truly the “Erediauwa” or the “Ataiyese” of Nigeria who is out to put Nigeria on a strong footing by putting in place a sustainable system the great majority of our compatriots, at home and abroad, can be proud of.

Obasanjo already has a great and worthy successor in Ngozi whose real name for Nigeria should have been “Aka Olisa”, “the Hand of God”, the Igbo name I chose to call my last child and youngest daughter, in recognition of the circumstance of her Birth. 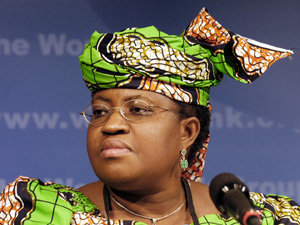 Ngozi Okonjo-Iweala has arrived the Nigeria leadership scene by miracle, and in similar circumstance, and she has proved her mettle as one of the best managers of our economy at this time in our History. I am all for Okonjo-Iweala for President. Those who argue she is too emotional and too inexperienced to be President just don’t know what they are talking about.

If she is never tested or given a chance, how can anybody rush to judgment that she is not up to the job. The most important job a president does is being able to pick those that can best help him or her achieve the goals he or she has set for himself of herself in governing the nation. The great Golda Meir of the State of Israel, the great Indira Ghandhi of India, Mrs. Bandaranaike of Ceylon and the great Margaret Thatcher of the United Kingdom, talk less Mrs. Sirleaf Johnson of Liberia, were all spotted for greatness and leadership and groomed as such in their respective countries, before they have all had a chance to accomplish a fraction of what Ngozi has achieved hitherto. A Yoruba leader standing up for once for an Igbo woman of substance would have been seen as a first in our history, and a reason to believe that Obasanjo is so much different from all his predecessors put together. That is my candid view, and that would have been a precedent of enormous proportions in a country riddled with nepotism and tribalism of the worst order.

Obasanjo should always be reminded that the greatest Leader of the India Movement, the great Mahatma Ghandhi of blessed memory, did not have to hold any political office before being proclaimed by acclamation and world consensus, as the father of the emerging India Nation and one of the greatest world leaders to have ever lived. So when Obasanjo is telling the nation he wants to finish and consolidate the work he has started, he is just not learning anything from history or the Bible which he claims he has studied so much in prison.

Any leader can only do but so much and let go, because building a nation is never a one man job, and is never finished. I don’t care if you are a Goliath in mufti or uniform. Hand over the damn thing to Ngozi Okonjo-Iweala and technocrats like her, and quietly step aside into your well deserved retirement, while you use your great clout and leverage with the international community to be the greatest defender and champion of Democracy in our own neck of the woods in Africa, for the remaining part of your God-given years in this sinful world.

That is the only path of Honor for a man who has been truly blessed by God, all these years, in a tower of Babel of more than 140 million people. Obasanjo, to me, is like the famous palm kernel that took refuge in the home of the bush rat for some time, and still came out of there unbroken.

I thank you, Mr. Lawson for joining in the campaign to give honor to whom honor is due. It is the turn of the South East to produce the next President of the Nigerian Republic. The time is now and the Nation already has a solid candidate in Ngozi Okonjo-Iweala.

I rest my case.