On the History of Nigeria Railways

The railways must be seen as a primary sector of critical importance to the economy – Luke Onyekakeyah (The Guardian, Tuesday, 16th September 2008)

In his well written article and letter to The Guardian, titled “Creating a Ministry of Railways (MOR)”, Luke Onyekakeyah has succinctly put forward what has always been on my mind and other well-meaning Nigerians who believe in the important role of rail transportation to the economy of a developing country such as Nigeria.

I have written two articles – The Urgent Need for Rail Transportation in Nigeria (31 October 2006) and Rail Transportation: A solution to the Carnage on our Roads (4 June 2008) calling on our decision makers and political leaders to action and stop dilly-dallying on this important sector of the economy and development of this country. I have also read several articles by other authors and experts calling for a speedy and concretised decision on the future of rail transportation system in Nigeria.

Everything seems to be falling on the ever deaf ears of our politicians, civil servants and leaders. The private sector is also indifferent.

I am not a transportation or railway expert, but I have been a railway buff since I can remember. I collect railway models- a very expensive hobby – and also read a lot on the history of world railways. The definitive history of railways in Nigeria is well documented in Francis Jaekel’s “The History of the Nigerian Railway” (three volumes (not sold separately). Ibadan: Spectrum Books, for Diamond Bank, 1997, £125.00, Vol. I, Opening the Nation to Sea, Air and Road Transportation, 236 pp., ISBN 978 246 314).

I am not going to add more to Luke Onyekakeyah’s well written article, because I simply don’t have anything to add to a short, but inclusive masterpiece. If our Government have ears, let them listen. We are going to catch up with them one day.

In the course of my quest for the history of the railways, I was lucky to come across several articles regarding the advent and history of rail transportation in Nigeria, and it was this that I would like to share with Nigerians, who might be oblivious of the fact that Nigeria was one of the first country in Africa to have a well-planned, well-developed and well-funded railway system. It is very sad to reflect on what has become of it, like so many other comatose and/or moribund infrastructures in Nigeria of today. I would like to share with you the glory of the Nigeria railways and then see how corruption, mismanagement, selfishness, indifference and the likes, have contributed to the fall of Nigeria in all aspects.

I would like to take you more on an historical journey than the pain of the present. The article was written by Nevil Miller, titled “Nigerian Island Tramway – The erstwhile Lagos Steam Tramway and its unique locomotives” The Railway Magazine, February 1966 pp. 103 – 106. (I have the magazine, and others too), complete with pictures and maps. Here is the reproduced article: 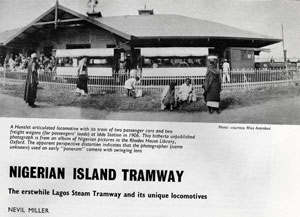 Although more than half a century has now passed since passenger services on the Lagos Steam Tramway ceased, the design of the articulated tramway locomotives was so extraordinary as to merit special mention in this article on the origin and operation of this little-known system.

He Portuguese made contact with the coast of West Africa near the present city of Lagos from 1460 to 1480. They moved away, but returned during the 18th century and named the small settlement, which had been formed on the mangrove-covered island by African settlers from the interior, Lagos – no doubt with the lakes or lagoons of Lagos, in southern Portugal, in mind.. It became the most notorious slave-trading centre in West Africa and because no agreement could be made with the local rulers to render effective the operation of the British Slave Suppression Squadron, the occupation of Lagos became necessary and a Treaty of Cession was signed in 1861. With the establishment of stable government and legitimate trade, Lagos entered a period of prosperity and growth from which it has never looked back.

In 1895 the Lagos Government Railway began to force its way from Iddo, on the mainland, to Ibadan, and was opened six years later on March 4, 1901. Carter Bridge was completed the same year, construction having commenced in 1896, to connect Lagos with the mainland. Because of the mistake of terminating the railway at Iddo, Lagos, the administrative capital and port of the Colony of Nigeria, was without any public (or indeed, at that time, wheeled) transport to connect it with the railhead.

That this had been in the minds of the Administration is evidenced by mention of a tramway in the Colonial Report for 1899. By 1901 it had been decided to build a 2ft. 6in.-gauge line over Carter Bridge and construction commenced. The opening of the Lagos Steam Tramway took place on May 23, 1902.

The original line ran north-west along the waterfront, from a point near Government House and the European residential area around the Race course, to Customs Wharf, where it turned north-east towards Ereko Market and Idumata. A 95ft,-radius curve took the line north-westwards again, through Ebute Ero and over Carter bridge to the railway station at Iddo.

There was a run-in outside the station building, a short siding to the parcels office, sidings to the goods transit shed, five roads into the engine and car sheds and a run-round which encircled these sheds. The track was single, with seven passing loops en route. At the Post Office there was a double junction incorporated with the passing loop, connection to the Public Works Department stores, and a straight run-through from the PWD wharf to the generating station for direct coal transfer. At Kokomaiko, the terminus, there was a run-round siding, a 20ft.-diameter turntable, and a water tank.

The sleeping track was of 2ft. 6in. gauge with a route mileage of 2 miles 58 chains, partly laid on (not in) the streets and partly on roadside reservations. The running time was 21 minutes, giving an average speed of 7 ¾ mph. Fares were 3d. “all the way”, PWD to Iddo 2d., and Ereko Market to Iddo, 1d. The headway was 45 min., later improved to 30 min., with the first tram at 6.30 hr. to connect with the 7.00 hr. mainline train from Iddo to Ibadan. There was no running after dark (this timed the last tram at about 19.00 hr.) Freight services were operated 0 it was, in fact, the only link at this time between Customs Wharf for moving imports up-country and for evacuating produce from railhead to lighter. The tramway was operated by the Lagos Government Railway.

Rolling stock consisted of ten passenger trailers with longitudinal back-to-back seats, built by the Ashbury Railway Carriage & Wagon Company, of Manchester. They were 19ft. long by 7ft. 2in. wide, double ended and fitted with tramcar-type hand brakes. The bodies were constructed from tubes, with open sides and canvas screens for wet weather. The cars were four-wheeled, the axle-boxes being provided with coil springs. There were about 20 un-braked goods wagon, each 12 ft. long and 5ft. 6in. wide, all made by the same company.

Motive power was originally provided by three locomotives of a type unique among street tramway engines. They were designed by the Crown Agents for the Colonies and manufactured by the Hunslet Engine Co. Ltd., of Leeds, bearing maker’s Nos. 751-3, and LGR Nos. 101-3. Delivery was made in September 1901. 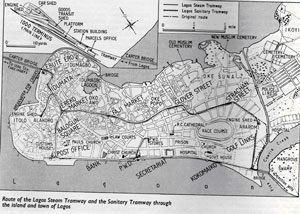 I will skip this for the sake of brevity and for its technicalities.

When writing the book “Lagos Steam Tramway”, extensive inquiries were made as to why these locomotives were designed in the form of an articulated combination vehicle. No solution could be obtained from the Crown Agents, the makers, the Nigerian Railway, or from aged Africans (Nigerians). Flexibility is one factor (the sharpest curve was 80ft. radius) but a conventional four-wheeled tram engine would have satisfied this requirement. A more important aspect was the 5-ton weight limit imposed over the Carter Bridge. The additional bogie enabled the locomotive to comply with this but it does not explain the box-car at the rear.

One purpose of this, we are led to believe, was the conveyance of His Excellency the Governor and other senior Europeans. There is no evidence that the box-car was used in general service and, while passenger cars were used by the African population, it would not have been deemed suitable at the time for senior Europeans to travel with the general public! Fixed to the rear bulkhead was shelving, which suggests that another use was the carrying of coinage and valuables between the Treasury, Iddo Station and the wharf, in conditions of security. More certain is the transfer of mail and parcels from Customs Wharf and the GPO to Iddo. This is borne out by the short siding which was provided near the parcels office – just long about enough to accommodate the Hunslet articulated engine.

The design must have served its purpose because a repeat order for a further two such engines was placed and they were delivered in Lagos in 1910, becoming LGR Nos. 104 and 105, works numbers 1016 and 1017. Identical in design, except for improvements to the motion and two 45-gal. tanks instead of 30 gal. ones, they cost £718 each f.o.b. Liverpool! It should be noted that it was not practicable to run these locomotives in reverse service, and this accounts for the turning circle at Iddo, the turntable at Kokomaiko, and the double junctions at the Public Works Department and the Post Office, where turning could be effected.

In spite of the success of the improved services and after much track laying and a deficit of only £248 in 1913, the Government took a very short-sighted view and decided to close down the passenger service, principally because the original rolling stock needed renewal. Closure was effected on January 1, 1914.

The Lagos Sanitary Tramway, built in 1906 (see The Railway Magazine, July 1964, page 581), which ran from Dejection Jetty to a junction with the Lagos Steam Tramway at Ereko Market, continued to operate over its mid-town route, via Strachan Street, Glover Street and Faji Market, until 1933. With its closure, the island of Lagos lost its only remaining railway. 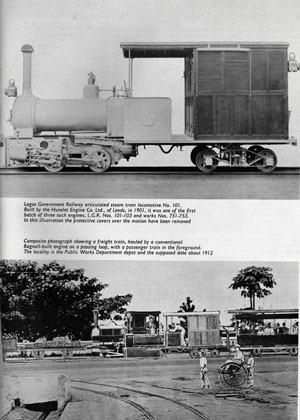 (Culled from The Railway Magazine, February 1966)

Interesting, isn’t it, that Lagos, and indeed Nigeria, actually had a tramway system as far back as the earlier part of the last century?

Gone are those days. What was left for us by the British as a legacy of colonialism, we found it difficult to build on, not to talk of sustaining and improving it, contrary to such in other parts of the world. That is the way Nigeria has gone, to the dogs, ruled and managed by inept, corrupt, incompetent, selfish, indolent and clueless idiots since the British left.

I do hope you have found this historical journey interesting, intriguing, fascinating and reflective. I have. And there’s more on the Lagos Sanitary Tramway and others to come.