This article issued from my response, to Iyke Ekeocha on a debate on abortion, presently raging on my wall.

I covered a few grounds in a few sound bites.

I wrote as follows:

Is taking a decision that affects other people, especially women, not been what men have arrogantly been doing since the dawn of time?

Since I raised that abortion issue, have all the people telling the woman, about God’s punishment for abortion, and how abortion is a crime not been men?

Is it not the men on that thread, who have been inventing excuse after lame excuse; and manufacturing every crooked philosophy, on why the woman should carry the baby raped into her, by the violating violence of her rapist?

For the shopkeepers of spiritual wares, and perpetual merchants of cant, a raped woman should not even consider abortion, under any circumstances.

Why must it be the men? The reasons for that masculine attitude, has an ancient ontology. It is buried in our subconscious imaginary.

Men have always elevated their penises to the position of God. Scan every religious or patriarchal mythology of history. That is the patriarchal ontology of many monotheistic theologies.

Men have forever defended rape. Their primitive imaginaries, created religions out of their undying need to worship their dicks, and the rapes it committed, and keeps committing across time and history.

That is why you get stories of God fucking and raping a virgin without her consent, across most ancient mythologies of pharaonic, Semitic, Grecian, or Roman origin. Even older!

What is ordinarily a rape, is then whitewashed, and canonized as profound acts of charity, and holy condescension, from Mr. God, which is the moniker for the Penis. It becomes a Holy act.

When the Penis or Phallus became God, men went out to create; as Camille Paglia argued in her Opus Magnus, Sexual Personae.

So, whenever men created God, God becomes Father; namely a man, who has impregnated a woman, or women, to beget sons. Not Mother or the Sacred Feminine.

The act of creation in this masculine purview, becomes the act of fucking, or penetrating nature, to deposit his seeds, both actual and metaphorical. This explains why patriarchal monotheisms are very savage, brutal religions; brooking no affront to its power; very controlling, and buccaneering in its urge to conquer.

It was born to rape, subdue, violate and possess all it can scan on its horizon. The depths and frontiers of its covetousness, both of flesh and territory is boundless.

Patriarchal monotheisms are epistemic sadomasochisms! They are ontologically configured to rape, plunder, brutalize and eviscerate all they touch, in subservient genuflection to the ontological potency of the phallus-god.

This is why the Scriptures of these monotheisms are horrifying chronicles of bloodletting, rape, plunder and conquistadorial genocide.

This is why Judaism spent years butchering the Amalekites, Jebusites, Philistines, and every other Canaanite tribe around Palestine, in the name of Yahweh, their local God, and his phallic promises.

Little wonder, the Covenant with Yahweh must be sealed in cutting off the penile prepuce, in ritualized circumcision. This shows you that it is the imaginary of Penis that was elevated to the ontologically level and it became god.

The Phallo-centric idea of a creator inhabiting primitive consciousness, must pay fealty to its origins. It must codify and stamp its impress on its origins; namely the Penis of the primitive man. That is the exegetical origins of circumcision. God was the male’s Penis. And to point that out to any seeker of truth, in spite of the theological superstructures of superstition that would be built upon it, the ancient mind, circumcised himself as the sign of his covenant with the God, he created off the metaphysic of his penis.

The savagery of the patriarchal monotheism is also seen in Christianity spending centuries, fanning inquisitorial bonfires, barbecuing women, and dissenters out of existence. Those who disagreed with her irrationalities, were labelled heretics, and banished, tortured or burnt at stake to satisfy the impious neurosis of a college of celibate penises, expressing the hideous brutalities of their repressed sadomasochisms, on their unfortunate victims.

Islam spent twelve centuries spreading murder, decimation, rape of women and children in the name of Jihad. Have you ever wondered why Islam promised the foot soldiers taking part in that devastating plunder they called Holy war, a paradise of 72 virgins? It is because the god of every patriarchal monotheism is a Dick. A penis.

Patriarchal Monotheism is patriarchy sculpting a Golden Calf, out of the conceptual golds of his penile and phallic ontology, and bending the knees at it.

To show you that Abrahamic religion is just a worship of male penis, take a look at this:

Judaism        = The Covenant must be witnessed on the Penis (Circumcision)

Islam = 72 virginal Pussies await you, if you die in the war, trying to murder those, who disagreed with your version of that superstition. (Jihad)

And these three religions have one father, namely Abraham.

This penile masquerade called God, created by masculine chauvinistic imaginary, has been raping and impregnating virgins, and virgin lands throughout the history of all ancient mythologies.

It has been raping and impregnating the earth with products, filling narratives with meanings, and filling existence with impacts both positive and negative.

Christianity even embraced its phallic origins; which is the ultimate origins, of all religions; namely from Sex worship, and most monotheisms from penis worship.

The New Testament writers, even plumbed this primeval soup of all religions, to spin the Virgin Mary story.

Here the Christian God; which the Christians borrowed, and hijacked from Judaism, had to rape the Virgin Mary in that narrative, like patriarchal gods have forever done; without her consent, for her to bear him a son.

To that end, creating a supreme being out of the local god of the Hebrews, and sit him on the Christian throne, means that he does not need to be profiled as a prolific rapist of Zeus’ ilk. He must not be a rapist of too many women. One woman should be enough problems. They sought out a submissive virgin for him. They made him rape her in their narrative to beget a son, which was himself.

Sons are heirs to, and celebrities of patriarchy. That is why women only play peripheral roles in such conceptual schemes. Instead of calling it what it is, namely rape, men created a religion out of canonizing that crime. They kept marketing that baloney, telling us that the child conceived out of such rapes, are Holy, and Sons of God.

And for them, that justifies the rape of a virgin by the “holy penis of that rapist of a god”?

Can you see why all those stories could only be authored by male scribes? If that God were to be here at this time of me-too- movement, I wouldn’t know what would have become of him. Harvey Weinstein or Bill Cosby’ s plight would have become his lot.

Most religions have their origins in pagan sex worship. That is why orgasm, which is the peak of pleasure is ecstasy, and the shape of heaven. Ecstasy becomes a description of heaven or the beatific vision in many religions. That is why God pours his spirit on all flesh. The only time one pours himself into anything is when a man is pouring his sperm in a woman. So that you know.

That was the crime of Eve. He learnt from the ancient serpent to deny man unhindered access to her vagina. And paradise was lost.

And this is why the New Testament story of the Christian, God fucking the Virgin Mary, or forcefully throwing himself upon her, or raping her and getting her to submit to him, became the initiation of the exodus back to paradise.

Here the men are telling us that salvation begins to take shape, when their God helped them to rape women back into granting them full, unrestricted access to the Vagina, which was paradise.

This is why every religion is indirectly, a worship of that divine penis, which conquered female symbolic resistance to masculine access to paradise (pussy).

Take a look at every tower of every church or minaret of every mosque. They are all the shape of a huge penis fucking the sky. The sky symbolizes the profound boundlessness of femininity. Deep, profound and enigmatic like the Vagina.

So, it is little wonder that men are not giving up on telling women what to do with their bodies. It was wired into the ancient consciousness of men that a bold, conscious and woke woman is paradise lost for them. But a subdued one is theirs to ravage, control and dominate at will. And a subdued pussy could be co-opted to further her own oppression, give it the false legitimacy of being inclusive; thereby ensuring the eternal stability of patriarchal power; and ensuring that their gods, those tiny weenies in between their legs would keep on raping to their hearts content, until the end of time.

That is the metaphysic of clitoridectomy. To eternally subdue women, men engineered across all patriarchal cultures; the cutting off of the bridge to her orgasm; namely her clitoris. By inflicting a clitori-genocide on women, patriarchy hoped to eternally subjugate the female enigma. Patriarchy thought that it can through that, forbid women from talking to heaven with their fingers, whenever they feel like. It felt that the female reconnection to paradise, must always be through the agency of his penis; through deep vaginal thrusting.

To that end, patriarchy hates, and abhors phenomenal women. A structure that shamelessly cuts off a woman’s clitoris, to hide its own fear of impending impotence, is also ready to stone that woman to death, who appears bold, as to threaten its sense of self-worth, or patriarchal privileges. This is why Judaism and Islam stones women to death, if sex goes away from the norms, which patriarchy laid down. Patriarchy is ready to call her a witch, and barbecue her out of existence, like the inquisitorial fires of medieval Christianity did; or force her to carry a pregnancy raped into her by other men, instead of allowing her to exercise rights over her own body, just like the Republican party is doing in the US together with their anti-abortion proponents all over the world.

The vagina is an ancient source of confusion and discomfiture to patriarchal consciousness. A penis rages with unparalleled turgidity until it goes into a pussy. There he meets his boss, and comes out a flaccid, timid blurb of flesh and a summary of weakness.

Primitive masculine subconsciousness has not understood that. He is always afraid that the vagina castrates him of all his potency whenever he pays her a visit. He knows that the real creator is the female. He knows that a woman never came out of a man’s ribs, that a man came out of a woman’s vagina. But his braggadocio wouldn’t let him admit that to himself. He has to hijack the narrative and create theologies to masquerade his inferiority complex.

Come and beat me. I said it. 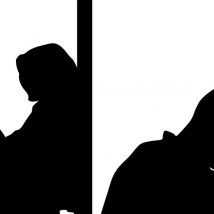 Once in a while, things do fall apart