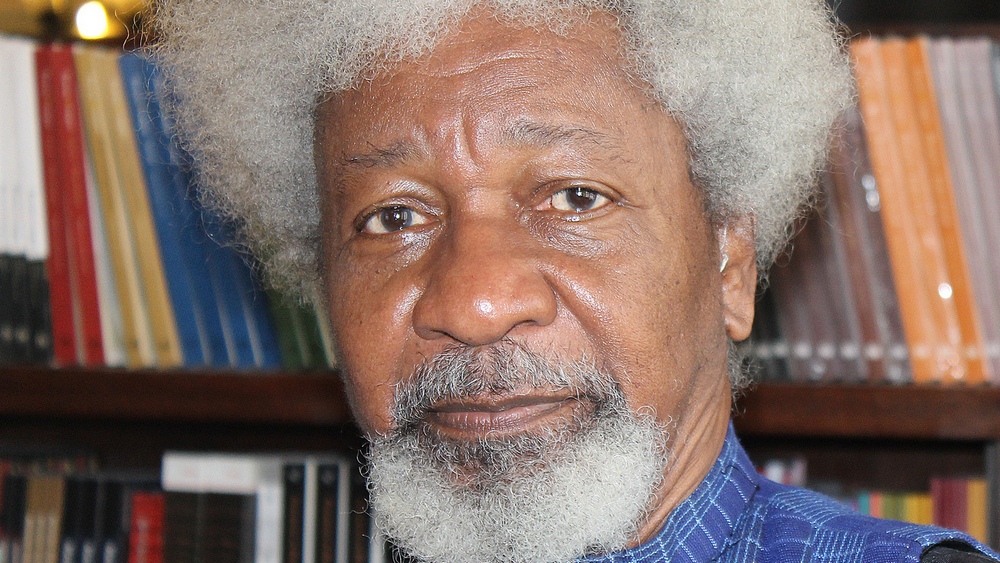 The title of this piece is not designed to mislead or confuse.

It is the best way I can capture in a few words the many different thoughts, places and persons connected to one another in my mind.

Everyone knows that Professor Wole Soyinka has never demonstrated any special love or affinity for sport even though, I believe, he may appreciate its significance as a social engineering tool.

From time to time, however, he lends his respected voice to serious national issues that have political implications and effects.

I do not know if he knows George Weah, but I believe he too must have been pleasantly amazed at how the young man rode on the back of sport to become his country’s President.

Professor Wole Soyinka, will one day, in the not so distant future, retire to the woods in Kemta, Abeokuta, where he will put up his feet in retirement, and begin to enjoy and celebrate the rewards of his immense contributions to the global pool of knowledge.

So, kindly read this to the end to understand the connection between the great man, politics, George Weah, sports and Ogun State, and why I believe he still has one last ‘dance’ to perform before he retires into the cocoon of his personal interests.

I can imagine that one of the several things that will cross his mind will be the place of his own State, Ogun, in the world today.

Former great African leaders, mostly at Independence around the 1960s, never separated the fate of Nigeria from the fortunes of Africa and the Black race.

Kwame Nkrumah of Ghana and, much later, Nelson Mandela of South Africa, both specially predicted that Africa’s future depended on the future of Nigeria, the most populous and the wealthiest Black community in the world in terms of human capacity development, education, mineral resources, a culture of intrinsic values embedded in the DNA of the people and a rich historical past.

So, Professor Wole Soyinka is of that genre. His view is beyond the narrow confines of his village or town, or even country, but of a frontier that extends globally whilst accommodating the Black race.

I am thinking about him. I urge him to spare a few minutes to go through my humble thoughts.

In governance, we cannot have proper development without the appropriate policies to drive it.

There cannot, also, be appropriate policies without the politics to drive them.

So, development and politics go together hand in hand!

It is a damning realization that puts those of us in sports firmly on either a collision, or a collaborative, course with politics. For too long we did not get involved in politics and our world suffered with all the power sport has to impact society and effect positive development and genuine change.

In our own little world of sport, no matter our dream for Nigeria – how we can use sport to drive national development, national re-orientation of Nigerians, youth engagement and empowerment, job creation opportunities, rapid and massive national infrastructural development, wellbeing and health of the citizenry, business, education, the economy, welfare of the people, leadership, nationalism and patriotism, culture, ethics, peace, friendships, healthy competitiveness, the winning attitudes, and so on and so forth – sport has remained a dormant and wasting force without the instrument of politics to drive it.

This was what George Opong Weah saw before he decided to wager his fame, his achievements in sports, his integrity as a social worker in his country, his vision of a great Liberia, against the usual entrenched political credentials of wealth, who-you-know, political godfathers, manipulation of results, buying of votes, power sharing, and empty promises in challenging for political power and the highest office in his country.

It was an audacious experiment that has opened a new vista in a continent riddled with the litter from failed political leaders. Only a few exceptions now provide a flicker in this dark world – Rwanda, Ghana and, probably, Kenya!

When you combine the vision of a person grounded in the sports philosophy (or the arts) with the opportunities that exist in the global industry, you will be unleashing a new and potent force that can overturn the old order of things and create a new world.

This combination will obliterate all the differences and shortsighted divide-and-rule tactics deployed by regular politicians to isolate the greater population of people who do not participate in the present political rigmarole.

These are the ‘games’ that produce leaders that come from the lower rungs of the stock of leaders in our society presently. They ignorantly squander the opportunities and resources of the State in mundane things that never alter the fortune of the majority of the citizenry, and never promotes the greater vision of the people.

Sports persons (and artists) are a special breed driven by the will-to-win, a global vision, the fighting spirit to conquer adversity, the competitive edge needed to take on some of life’s most intractable problems and to enjoy the ride of the adventure, win or lose!

George Opong Weah has opened that new page that can bring about an authentic paradigm shift in politics, particularly in Africa. That’s why, some of dare, even now, to raise our voices.

Now, my dear Professor, having explained the power and potentials of sports in politics, I want to remind you that sport is but a small part of a much bigger industry that includes all of entertainment – the arts, film, music, leisure, hospitality, culture, tourism, drama, dance and theatre.

This industry is, without question today, one of the largest and most viable in the world contributing immeasurably to the global economy, and it is still growing.

This sector of humanity is incidentally the forte of the Black person on earth. It provides him the greatest, fastest and easiest opportunities to make an impact in the world. And if he deploys it well, it could be an effective tool in the struggle for true emancipation from mental and physical slavery, from racial discrimination, from enslavement to poverty, abuse, hunger, disease segregation, and inferiority complex ravaging the entire Black race.

Entertainment is the Black person’s greatest weapon to fight back and to create a new world where he will be respected, rewarded and regarded as equal to any other person on earth, be they White, or Brown, or any other colour.

This battle has started already. The weapons for this fight are with us and available in abundance.

Designed by higher forces beyond our comprehension, Ogun State, is properly located at the epicenter of this emerging energy.

Properly channeled and driven by new technology the State, today, presents the perfect environment to start the evolution of a new Nigeria, a country that will eventually become the launch pad for the entire Africa and the Black race to become a formidable global cultural superpower that will be capable to take on the rest of the world in this battle of Civilisations.

Whilst driving this bigger vision and mission, Ogun State will, in the process, join the league of the greatest and most advanced communities in the world.

So, we must escalate even our domestic conversations to that level now.

We must think beyond mundane and parochial issues that have dominated discussions on several social media platforms as the State prepares to elect new leaders.

The story and potentials of Ogun State are best reflected in the lives and achievements of its great sons and daughters. I list a few only to buttress my point.

In Ogun State has the most needed resource – the people.

Starting in  Ogun State, we must establish a new global order by building a new environment that will provide the simple and basic needs of the citizens;  that will take care of their wellbeing and health especially the poor, the weak and the vulnerable in society; that will promote quality and industry-driven education for all;  that will make superstars of professionals particularly teachers and ordinary folk doing exceptional things; that will reinforce institutions with modern technology and methodology; that will take maximum care of retired workers and civil servants, the elderly and physically disadvantaged and engage their experiences and knowledge to steer the ship of the State away from known rapids; that will turn the entire State into a massive construction site engaging the entire population of the jobless youths by filling the huge void of middle level manpower workers that drive the economies of every nation; that will protect petty traders, artisans and grassroots workers; that will attract foreign Black investors (sons and daughters of our forefathers forcefully taken away into slavery and left stranded and homeless for over 400 years – a huge population in the Diaspora) to get involved in building this new ‘homeland’ in the heart of Yorubaland in Africa. This will become a new paradise for every Black person on earth located in Ogun State.

We can do all these things. Yes, we can. How? It is an exciting win-win challenge that a creative genius like Professor Wole Soyinka can see through my humble prescription amongst many other things that will be put into making Ogun State the best place to live and work in Nigeria and indeed in Africa.

From May 2019, Project Build Ogun State will start.

For the first two years, the entire state will be a construction site preparing to host the largest congregation of Black artists from around the world since FESTAC ’77.  Every corner of the State will be involved equally in this monumental project that will make Ogun State, in 4 years, the epicenter of a new Black consciousness, development and Civilisation on earth.

It will impact every aspect of life and catalyse the greatest development ever known to man! The resources are available in Ogun State to achieve this.

If I were to have political power today, that will be my manifesto!

It will also be an opportunity for the world to watch the last dance steps and crowning handiwork of one of the greatest Black minds in modern history, a man from Ogun State, a state brimming with more of his kind, but held back by politicians from the worst stock of their human capacity!