Still On Odi And The Mad Dog Syndrome

Nigerians can not argue that they have seen the last of the military, because whether we like it or not they are still firmly entrenched in our sub-conscious. Though they may have since swapped their military uniforms for Agbada, but they are still behind the scenes pulling the strings.

On the political scene, Nigerians are still contending with retired generals such as Olusegun Obasanjo, Ibrahim Babangida, Muhammad Buhari, and Buba Marwa, who all nurse the ambition of becoming Nigeria’s president in 2007. Behind the scenes, retired military officers reign supreme as they have first pick over board appointments in government parastatals, agencies and commissions. Even with the introduction of the Office of Due Process in the presidency, the military still have easier access to lucrative government contracts using their ‘front’ companies and cronies.

Our present socio-economic conditions today was visited upon us by a wasteful military, whose pre-historic and barbaric tendencies earned them the ‘mad dog’ nickname in the eighties, after some soldiers had reportedly invaded the house of the influential and wealthy M.K.O Abiola and assaulted members of his family as a result of a traffic altercation involving Kola Abiola and a military officer. 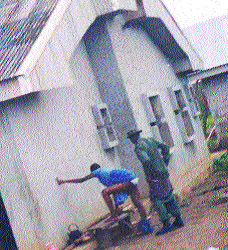 My heart bled as I read the lead story of the Sunday Sun newspaper titled A Harvest of Fatherless Children. The story tried to put into perspective the psychological scares left on the souls of the people of Odi, an Ijaw community in the Kolokuma-Opokuma Local Government Area of Bayelsa State whose village was temporarily occupied and ravaged in 1999 when the federal government ordered troops to flush out the killers of some 10 policemen earlier dispatched there to keep the peace.

The human and material consequences of the excessive use of force by the military in the now infamous Odi massacre had attracted wide condemnation by Nigerians and members of the international community.

However, 6 years down the line, the evil handiwork of the beastly soldiers has now begun to manifest in the large numbers of fatherless children in Odi who were sired when their innocent mothers were savagely raped and beaten repeatedly into submission by the mad dogs. 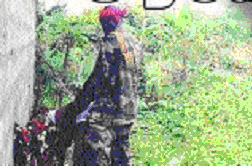 These pictures of the soldiers in their uniforms caught in the act raping Odi women in broad day light and possibly in the full glare of the other members of the community are shocking and touches on the old wounds and scares once again.

Some people may claim that the Odi and Zaki Biam incidents are only isolated cases, especially regarding savagery and the use of force by uniformed men on this scale, over the people that they are supposed to be protecting, but it must also be taken into consideration that thousands of such incidents still go on in both urban and rural communities in Nigeria without being reported.

I remember an incident in 1993 when a friend and I were mercilessly beaten by some soldiers based at the NAF base in Ikeja, over a slight argument at the Murtala Muhammed international airport as we were escorting another friend to the airport, we were eventually dumped at the back of their open-back Land Rover truck and towed away like common criminals to their base where we were subsequently detained for a week and denied access to our families, legal assistance was out of the question at the time. While their ‘guests’, the sadists subjected us to different dehumanizing treatments and seemed to enjoy seeing us writhe in pain and agony.

Recently, Ugochukwu Ejinkeonye wrote extensively on the Police Bloody Invasion of Umuaka, a town in Orlu Senatorial Zone in Imo State. Such rampant use of force by members of the armed forces including the police, against members of the civil society calls into question their training curriculum, and opens the door for a debate on whether such should not now be reviewed in light of present day realities.

There is indeed a case for the review of the role of the ‘uniformed men’ in today’s contemporary Nigerian society. Such review will also consider the essence of Nigeria’s increasing defence budget in peace time, especially when Nigeria is at peace with its neighbours and is also not facing any imminent threat of external invasion. Some of the funds from the defence budget could actually be diverted to more pressing areas in the country requiring urgent attention, including the payment of compensation to thousands of Nigerians who have suffered in one way or the other in the hands of the military and their sister forces. Definitely buying moribund fighter planes from China is not a strategic decision if you ask me.

The anniversary of the Odi massacres and the re-publication of the rape pictures should indeed make all men of good will, particularly members of the Nigerian Senate and House of Representatives to consider a special Marshall plan for the Odi people.

Odi and other such incidents are human tragedies still begging for the world’s attention.