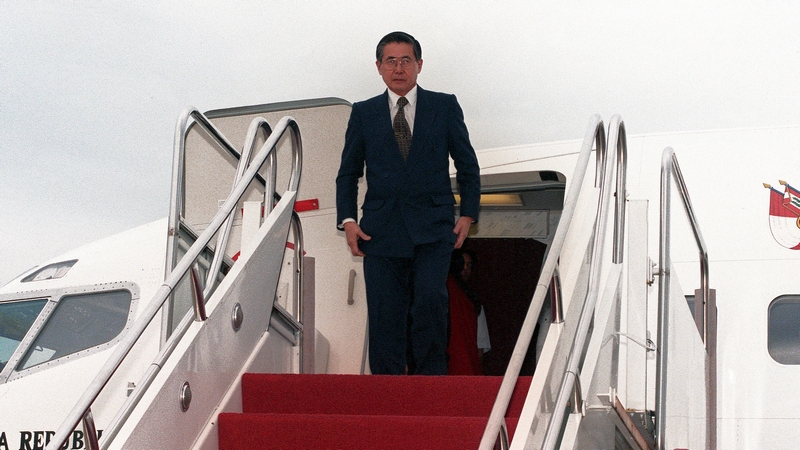 Alberto Fujimori was the popular former President of Peru for close to a decade. He came to power in 1990 and left in the year 2000. A Peruvian of Japanese descent Fujimori, to his many supporters, was that strong leader who saved Peru from the twin evils of economic collapse and local terrorism. But his many opponents saw him otherwise: an authoritarian power-thirsty dictator who rode roughshod over the country’s democratic institutions in order to preserve his hold on power. Like him or loathe him, however, the man did his best to change the course of history in his country and today he is remembered for his capacity to deliver where many a leader would have failed woefully.

In 1992 the ex-President, frustrated by the legislative and judicial arms of government, had controversially dissolved the Peruvian Congress and Courts and assumed dictatorial powers with the support of the military high command. An agricultural engineer born of Japanese parents, Fujimori was a political upstart until weeks before the presidential poll that brought him to power. Born 28 July 1938 to Japanese Buddhist parents of dual Peruvian and Japanese citizenship the young boy was baptised and raised as a Roman Catholic. His Peruvian citizenship had caused some divisions in the polity with some critics referring to his Japanese paternal origins and therefore ‘a foreigner’.

In 1995 Fujimori was re-elected overwhelmingly but prior to that election he had smartly restored the powers of Congress and the courts. Among key moments in his presidency one that stood out was the hostage siege organized by the Marxist (MRTA) rebels at the Japanese Ambassador’s residence in Lima in 1996-97. After some months of stand-off elite commandos were sent into the building to confront the terrorists and take over the seized edifice. The military hardline policy worked perfectly as the armed rebels were all killed and the hostages rescued! The dare-devil operation somewhat cemented Fujimori’s reputation as a tough man whose anti-terrorism stance was well grounded. Another key moment happened when the Shining Path rebel group leader, Abimael Guzmán, was caught and docked for the atrocities committed by the group.

Fujimori fought hyper-inflation and poverty of the downtrodden but the celebrated bribery scandal involving his former intelligence chief, Vladimiro Montesinos, helped tarnish the President’s image. And when he fell from power he fled to his parents’ native Japan where he lived for five years in self-imposed exile. He implemented a radical programme of free-market reforms — removing subsidies, privatising state-owned companies and reducing the role of the state in almost all spheres of the economy. Today he is still in jail in Lima having been found guilty in December 2007 on charges of abuse of power, over the removal of sensitive video and audio tapes from Montesinos’s home. He was convicted and sentenced to 25 years in prison! In April 2009, judges had found him guilty of authorising death-squad killings in two incidents known as “La Cantuta” and “Barrios Altos”, and the kidnapping of a journalist and a businessman. Repeatedly Fujimori had denied the charges saying they were trumped-up and politically motivated.

Fujimori could be said to be the architect of his own political misfortune. Apparently seized by the inordinate ambition for a second shot at the presidency, perhaps nostalgically reminiscent of the adulation and popularity that trailed his first coming, he had voluntarily elected to fly first to Santiago Chile enroute for Lima to launch the bid. But he misread the political mood of the powers-that-be back home. His extradition was sought from the Chilean authorities but Fujimori fought against that for two years legally and lost. He was consequently extradited and charged. His ordeal started from that moment he misjudged the intentions of his successors.

The Fujimori sydrome could be described as the determined quest of a presidential family to dominate a political landscape by way of power succession of a family member to wit: a son, a daughter, a wife or a relative. The word was used in Peru few months back during the presidential campaign featuring the daughter of the former President, Keiko Fujimori, and other candidates. While Keiko won the first round besting other candidates the second round balloting proved abortive as her rivals teamed up with her opponent, the President-elect, to see her defeated at the polls. She was accused of drawing from the political capital of her incarcerated father in order to free him via presidential pardon once elected President. She put up a huge campaign that convinced many Peruvians of her presidential capacity but her father’s controversial stewardship and her relative inexperience played largely against her ambition.

There are negative and positive sides to the Fujimori syndrome under reference around the world. Few examples would suffice here. In Argentine the Kirshner husband and wife had presided over the destiny of the nation for over a decade with the latter succeeding the former. In the US George Bush and George W. Bush had had their times in the White House and another Bush, Jeb, could one day make it to the Oval Office in Washington DC. If Hillary Clinton beat Donald Trup for the White House come November she would have made history as the first lady to have occupied the White House as President and solidified the Clinton family name. In Canada the Prime Minister, Justin Trudeau, is a son of a former PM. In Pakistan the Bhuttos did their times as Prime Minister of Pakistan in different epochs. And in the neighbouring India the Ghandi political dynasty was sustained from one generation to another.

In Africa the Fujimori syndrome is more pronounced in the negative sense given our vindictive graft-filled politics. In Dakar Senegal former President Abdulahi Wade had vainfully tried to impose his son, Karim, on his political party as the flagbearer for the next presidential poll. But the incumbent President Macky Sall had decided to undo the Wades politically by commissioning an anti-graft investigation against Karim for the stupendous wealth he amassed during the reign of his old father. Karim was a super Minister during that period holding sway in different ministries and attracting derisive remarks from opponents who tagged him the “Minister of heaven and earth”. He was recently released from prison by the grace of a presidential pardon and minutes after smelling the air of freedom he jetted off to Qatar where he is presently living in ‘exile’. His presidential bid must have been compromised by the conviction and imprisonment.

In Kinshasa DRC Joseph Kabila is becoming more and more oppressive as his second term presidential mandate comes to an end by December. The general elections are being deliberately sabotaged and delayed by the Kabila forces since he cannot present himself for another term having constitutionally served out his two mandates. But Joseph is scheming to remain in power or cause chaos! All manner of political subterfuge is being deployed to decimate the opposition and indefinitely postpone any presidential poll from happening. His most redoubtable challenger, Moise Katumbi, is being hounded by the Congolese justice system under executive orders. The T. P Mazembe FC boss is being frustrated at all fronts and he seems to have cowed out at last having gone abroad for medical treatment and gone silent ever since.

In Lome, Togo, President Faure Gnassingbe has been exploiting the constitutional nonsense of indefinite shots at the presidency to perpetuate himself in power. He represents the very best description of the Fujimori syndrome in Africa. His late father, Gnassingbe Eyadema ruled with iron fist for more than three decades and died on the seat! And here we are with a son who is not afraid to repeat the feat of his late father if the timid Togolese opposition and populace allowed him to get away with the constitutional rape of democracy. Faure has shown himself to be a strong man on a conquest mission. His half bother, Kpacha, the former Defence Minister, is still in prison having been convicted for coup plotting in 2009! He is serving a 20-year jail term!

In Libreville Gabon President Ali Bongo Ondimba is facing a hot challenge from opposition figures in the upcoming presidential poll of August this year. Ali replaced his late diminutive father Omar Bongo as Gabonese President after the latter died on the ‘throne’ from where he ‘served’ for more than thirty years. Bongo junior is currently embroiled in birth certificate scandal. He was alleged to be a ‘Biafran’ from Igbo-speaking part of Nigeria who was ‘adopted’ by the late Bongo after the Biafran war! If that could be proven to be true, that is, that Ali Bongo is not the real biological son of the late Omar Bongo then the Gabonese constitution bars him from ever holding a presidential function. Besides, the formidable opposition has the former African Union President and former Minister, Jean Ping, positioning himself to take over from Bongo come August.

Back home in Nigeria the Fujimori syndrome does not stand any chance of happening any time soon considering our polluted convoluted political environment. No Balewa, Azikiwe, Shagari, Gowon, Obasanjo, Jonathan or Yar’Adua’s son or daughter or wife could have pulled out such huge feat of living in Dodan Barracks or Aso Rock as a President after their father had finished their mandate. But much as such could not be possible in the nearest future we have had two sons of two retired Generals and former Heads of state trying their hands on gubernatorial levels in their states of origin. Mohammed Babangida never hid his quest to become the Niger State Governor but thus far he has failed. Ditto Mohammed Abacha in Kano!