By June 1967, the uncertainty surrounding the safety of Onitsha had prevailed upon my family to think of a safe refuge somewhere else And within a couple of days, news of the civil war, and of the rapid advancement of the federal troops, finally forced them to take refuge in the town of Nnewi. Nnewi my maternal roots was though safe, but not without the shattering and dreadful sounds of large-caliber weapons, fired from low-flying jet fighters.

Ojukwu, then, popularly called the lion-of-Biafra was the man of the moment. He was the president of the republic of Biafra. For the fact that I was a mere five-year-old lad, a vivid recollection of the events of the time may not be possible. But the news of the man, Chukwuemeka Odumegwu Ojukwu; his strength of character, guts and battle field exploits, were clearly impressed upon the memory of every Biafran kid. Especially, those who found themselves sheltering in Nnewi, one of the heavily fortified cities of Biafra.

The name, Ojukwu, resonates images of renowned revolutionaries such as Cuba’s Dr. Fidel Castro, the legendary Argentine-born Marxist guerrilla leader, Ernesto Che Guevara, and of late, the Iowa-trained Sudanese economist, and commander of the indefatigable SPLA, late Col. John Garang De Mabio. Col. Garang, has widely been acknowledged by political observers around the globe, as one of the most visionary and incisive revolutionary thinkers of our time.

The Igbo love for Chief Ojukwu, and the admiration for him by many Nigerians cannot be contested. This was exhibited when Pres. Obasanjo sent him the famous “one way” ticket to Abuja to appear before the SSS. The end of the impasse showed that the cult and the enigma called Ojukwu, was and still is, very much alive. 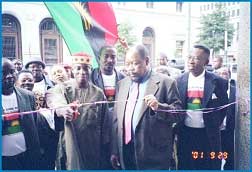 The do-or-die scenario at his Enugu hilltop mansion, and the roll call of his visitors and volunteers were intimidating. In a nutshell, Obasanjo was left without any iota of doubt, that forty years after, Ojukwu was still the “general of the people”. It dawned on him that Chief Ojukwu’s dutiful follower-ship was overwhelming, and ever intact.

I doubt if there is any contemporary Nigerian politician that can stir emotions as much as this man. It’s no surprise that the Nnewi high Chief has been referred severally as “the last of the greats”, in descending order of reference to political giants like Herbert Macaulay, Dr. Azikiwe, Chief Awolowo and Sir Ahmadu Bello.

Of course, any great leader would always be concerned on how history will judge him, vis-à-vis his legacy. But, the unique life and times of Gen. Chukwuemeka Odumegwu Ojukwu, should have by now, assured him of a positive place in the annals of world history. For many heads of state may not achieve his level of recognition even after their passage.

His post war re-emergence in Nigeria’s political terrain has been less glamorous, though, symbolic. He has managed to maintain political relevance on the highest levels, despite the odds and stigma of the ill-fated Biafran war. His political resurrection through APGA was nonetheless, a good omen. Coming at a time his Igbo people are feeling shut out in the affairs of the post-war Nigeria.

In 2003, He was able to wither the continued political trivialization of his kinsmen by ensuring that the presence of the other leg of Nigeria’s tripod, Igbo, was represented.

He emerged one of the trio of Nigeria’s major ethnic groups’ retired military generals that contested for Nigeria’s presidency. In that election, he made a resounding statement. His APGA’s victory in all South Eastern states was not in doubt, but a doctored election results ensured that the man and the electorate did not savor the victory. It could have certainly been the epic of his civil political career.

His input on the peaceful way forward for Nigeria would for a long time be remembered, even as constituent parts of the nation still clamour for “self -determination”. A similar position which he advocated at the Aburi peace meeting before Gen. Ankrah of Ghana. However, the events on the ground today, have only but proven that he was ahead of his time. A rare gem.

And yes, indeed, like the centennial Halley’s comet, his ilk are rare apparitions. But the dignity surrounding such human quality, must be conducted at all times with the commensurate decorum. At a point, there must be a hand over of the baton to lieutenants. For change is constant, and mortality is inevitable.

And In the light of such reality, a teacher, historian, intellectual, and military strategist such as Gen. Odumegwu Ojukwu, must know when to retreat, even in civil politics. More so, for the reasons of good health which he does not have, and most importantly, the political good will at the national level, which the civil war has cost him.

Sometimes, I do wonder how he envisage winning a presidential election in Nigeria. Though, It is not impossible, but not at the current level of Nigeria’s political maturity.

Again, another stalemate is that once Ojukwu is still in active politics, the Ojukwu-cult, excuse the pun, would make it difficult for another young rallying figure to emerge in Igboland. This fact and Ojukwu’s difficulties at the federal level, will continue to deprive the Igbo of a new dynamic leader with a mass regional and national good will.

No doubt, he has been cleared by the INEC, but we already can guess correctly his margin of victory, should he insist on contesting the presidential elections.

The recent accusation and counter accusation of bribery going on between him and Chief Chekwas Okorie was quite regrettable. Most admirers of Ikemba fear that this could be the beginning of the diminishing returns for this giant of a man.

As APGA steers itself out of the present quagmire, let it be a time for deep reflection for the Chief. A time for Ikemba to help reorganize the Igbo political machine, and a time to finally take that advisory role of a father.

Certainly, the 20th century African history will not be complete without the mention of this unique Igbo, Nigerian and African personality.

Ossie Ezeaku is a Metallurgist and public commentator. A native of Ukpo-Dunukofia, Anambra state, Nigeria, he currently lives in Belgium.

Ossie Ezeaku is a Metallurgist and public commentator. A native of Ukpo-Dunukofia, Anambra state, Nigeria, he currently lives in Belgium.