Ugochukwu Ejinkeonye is not only a quintessential Nigerian writer and journalist, he is, undoubtedly, one of the most formidable literary and social critics in the country today. Ejinkeonye, whose birthday is today (May 27), is not only a wordsmith of note whose diction, and images capture the experiences and nebulous fancies of the Nigerian condition, he is also one of Africa’s most celebrated newspaper columnists and public affairs analysts. 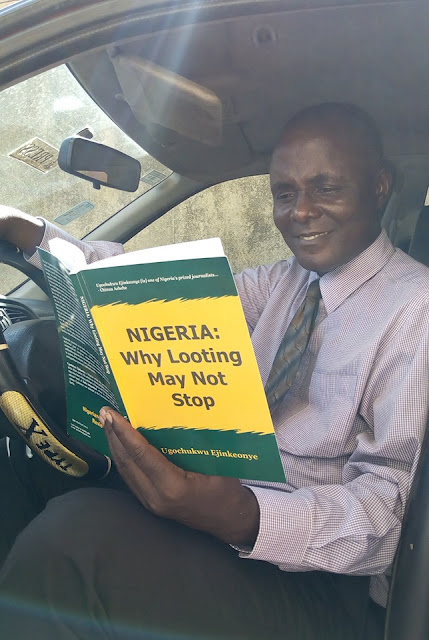 Ugo, as he is fondly called by friends and admirers, is not only trained in the intricate use and application of English words and grammar, he is gifted with the ability and capacity to comment with admirable lucidity and illuminating temper, on the insularity and philistinism of our turbulent existence. Indeed, most of the theoretical and critical essays of Ugochukwu Ejinkeonye have been widely published in local and international newspapers and academic journals with tremendous acclaim.

His recent offering, NIGERIA: Why Looting May Not Stop, is a collection of some of his columns published in newspapers and journals over time. It is an engrossing tapestry of the Nigerian condition. Drawing afflatus from language, literature, journalism, religion, politics, culture and everyday experience, Ugo’s book of just about 120 pages, segmented into two parts of unequal chapters (Part One has 17 chapters and Part Two, 5 chapters), is a forum in which the highly informed commentator effects an in-gathering of his critical sallies. Like the proverbial dry meat which cannot be easily masticated, this slim book can be expanded to a 500-page volume when gleaned against the backdrop of everyday use of language or ontological evaluation.

In fact, the single-piece chapters evince a uniqueness which beggars unilinear trend or continuity from one chapter to another. Although a clear radical concern links the chapters, his aesthetic and political messages do not readily subsume themselves within a regular orthodoxy. What I’m trying to impugn here is that Ugochukwu Ejinkeonye’s new book, NIGERIA: Why Looting May Not Stop, first published in Nigeria in 2019 by Oasis of Greatness Publishers Limited, Benin City, Nigeria, reads like an abstract for a post-doctoral seminar, to the uninitiated reader. While it is not particularly laced with technical architectonics like a Soyinka book, for instance, NIGERIA: Why Looting May Not Stop, is not for the ordinary reader, I must confess.

Dedicated to “the ever-suffering Nigerian masses, hapless victims of the perennial, brutal looting of our commonwealth”, the book, which is liberally ornamented with Marxian dialectics and socialist praxis, commences with a forethought written by the author himself. Titled, “A Monster Unduly Pampered”, the six-paged introduction takes a swipe at Nigeria’s gullible culture of corruption, its official harbingers, the society that harbours it, the political and economic managers that pamper it and the social pretenders who humour Nigerians and the world at large with it.

Throwing jibes at those who massage the menace while claiming that they are fighting corruption, the critic roars: “No, you can neither fight corruption with soiled hands nor retain monopoly on it! And so the whole thing has been horribly compounded, leading to the emergence and successful empowerment of a very formidable, parasitic class whose sustenance and longevity solely depend on its ability to continue sustaining the culture of corruption and bleeding the country pale.”

The Forethought which is indubitably the summary of the book, announces Ugochukwu’s composite brilliance and refracts the alienating reality and sheer murderous fantasy of our current existence. To paraphrase a modified form of Hegelian dialectics: if it is true that certain writers seek to express the most basic truths of an age in their art, it is equally true that the period itself “chooses” certain writers as the vehicles for the expression of these truths. Ejinkeonye in his columns circulates the basic truths of the Nigerian condition in their abject garishness.

One of the truths he espouses is that the idle pleasure speakers and the looting class use the massive loot of our national patrimony to manipulate the country’s electoral system, whereas the helpless and hapless majority are forced to eulogize the plunderers to high heavens while the nation bleeds to no end. Never has so much been stolen by a few in the world as in the first sixty years of the discovery of crude oil in commercial quantity in Nigeria, a period when multimillionaires sprang out of raw new riches in an oil boom unmatched in the history of mankind. With an encompassing wit and urbanity, Ejinkeonye tells of their incredibly lavish life-styles and shameless moral imbecility.

At this critical juncture, I would crave the indulgence of my esteemed readers to see this piece as being more of a tribute to my bosom friend and colleague than a review of his highly critical, masterfully written and riveting book, due to constraint of space. Maybe, as time goes on, I would offer a more profound, tree-by-branch review of the book. I met Ugochukwu Ejinkeonye for the first time in 2003 when we were both members of the Editorial Board of Daily Independent Newspapers.

Before then I had known him by reputation having edited and published some of his opinion polemical pieces on the Op-Ed page of the defunct The Diet where I was the Editorial Page Editor as well as read them in other national dailies to which he contributed. As the marketplace of ideas where Nigerians of various intellectual backgrounds and ideological persuasions gathered on a weekly basis to pontificate on any issues under the sun, the Editorial Board of Daily Independent then was like the testing ground or the faculty seminar of a reputable university.

On the Board, there were usually ideological divisions as we did run the broad-based American model that admits newspaper and ivory tower intellectuals to lock horns and set agenda or advocate for society on both local and international issues. We had the leftists and the conservatives; then we had the centrists who tilted the balance.

As at the time we were there, the Editorial Board had robust and effervescent debaters, men of enormous intellectual distinction, such as the leftist grammarian Dianam Dakolo, the conservative and brilliant lawyer Sam Kargbo and the Harvard-trained and fast-spoken legal scholar, Dr. Sam Amadi. While the presiding deity of the Board, Prof. Mike Ikhariale, the distinguished law teacher and orator – a man of nimble intelligence and great sensitivity who had just returned to the country from Harvard University Law School where he had been on sabbatical, would usually cut deftly through the miasma of contentions to identify the core issues, the aggressive and fearless but very brilliant Dakolo would always be there taking notes whether or not he was to write the endorsement. Another guru, Adekanmi Ademiluyi, an Ile-Ife Prince and brilliant London-trained economist, and Tiko Emmanuel Okoye, the witty and urbane interventionist, also an economist and international finance expert, were also there with their vast knowledge of economics. Do not be swayed by the sharp intellectual inquisitions of Ejinkeonye, the literary scholar who writes with great ease but with painstaking rigour and felicity of language; the dialectical accuracy of Dr. Tunde Babawale, a distinguished professor of political economy or the critical elucidation of Dr. Dotun Dosunmu, the engineering professor or the pungent economic analysis of Henry Boyo, the radical nonconformist and iconoclastic economist.

The Editorial Board in session also benefitted from the incisive epistemological articulations of Dr. James Tsaaior, the award-winning literary scholar and Professor of Media and Cultural Communications, or the sardonic wit and graphic humour of John Osaze-Langley, our Editorial Page Editor (of blessed memory). At that cosmopolitan and tendering period in the life of the Board, we also had as members such brilliant and highly articulate intellectuals of note as Greg Obong-Oshotse, the urbane and swashbuckling First Class political scientist and journalist who was Editor of the daily title.

When Greg was moved to the London office by management, his successor, Akpandem James the brilliant humour merchant and mass communication expert joined the Board. Lest I forget, the Board also had Danladi Bako, the suave mass communication guru, seasoned broadcaster and verbal mechanic with platonic baritone voice, who was always flying into Lagos from the Sokoto Caliphate to add a Northern voice to our debates. There was also on the Board, Dr. Boniface Chizea, the soft-spoken First Class mathematician-turned conservative economist. Barr. Ted Iwere, the honed mass communication expert and racy writer, our Chief Executive Officer and an ardent newspaper man, was always putting up some casual appearances to spice up our debates with his graceful humour and thunderous laughs. As the years grew in space and time, Dakolo and Ademiluyi, in turn, became Editorial Page Editors and Chairmen, respectively. The international journalism scholar, erudite writer and brilliant reporter, Ikechukwu Amaechi also had to join the Board upon his appointment as Editor of the daily title when Akpandem was elevated to the position of Managing Editor.

It was this rich background that helped to recharge Ugochukwu’s intellectual battery and put his inquisitive mind on edge. As an informed commentator on varied national issues, Ejinkeonye is fearless, and his column sparkling, yet pesky and sometimes brutal, who often bruises the egos of many a politician. I remember one column he wrote on Mrs. Stella Obasanjo, Nigeria’s First Lady at the time, on her excessive passion for make-ups titled, ‘Who Does Stella Obasanjo Want To Impress?’ It was fearlessly brutal. His writing does not fall within any pre-cast or proverbial strain. It is as distant from existing critical norms as a guerrilla foco is from a standing army.

Ugochukwu’s journalism especially the most intricate and intellectually tasking aspect, editorial writing and informed commentary, is consequently strung together by a concern for, and almost an obsession with certain recurrent motifs. His corpus therefore requires a large canvas.

Yes, Ugo has had cause to tell me pointedly that he admired my vintage prose style even though he disagreed with some of my critical positions. As professional colleagues and intellectual contemporaries, we respect and cultivate our common mutuality. He is a gentleman with no aspirations to self-glory or anti-productive martyrdom but a man with an irrepressible conscience and a shrewd and sorrowful insight into the lives of the suffering masses of Nigeria to whom his book is dedicated. Ugo, as you celebrate your birthday today, here is yours sincerely saying, many happy returns, my great friend and brother.

Dan Amor, a writer, journalist and former editor, is a columnist with 'Daily Independent' newspaper. He resides in Abuja and can be reached via danamor641@gmail.com.

Dan Amor, a writer, journalist and former editor, is a columnist with 'Daily Independent' newspaper. He resides in Abuja and can be reached via danamor641@gmail.com.