What Does Babangida Want?

Yes, he is a citizen and a man just like me. He has the right just like every Nigerian to contest for any elective position in the land, as long as he has not, and does not run foul of the laws of the land as stipulated in the electoral laws. But were Babangida to be any other citizen, there wouldn’t have been a need for this piece and the several others already written, and which would still be written about Nigeria’s most infamous citizen.

He remains the Nigerian that has affected our consciousness the most, I just barely left secondary school when he came into power, so in a way my generation grew up knowing him, and were influenced in so many ways by what his regime did, and did not do during his first coming. It was during Babangida’s era that I went to university, so in a way one could argue that during the formative years of my generation, he was already there twisting and turning our fate and destiny.

I also remember that during my NYSC service year at Tse-Agbaragba in Konshisha local government Area of Benue state, he still wouldn’t let go, I remember how I went to listen to the transistor radio of the village chemist to hear of the news of the cancellation of M.K.O Abiola’s election, this was despite having earlier heard all the villagers rejoice at the news of the exit polls which showed Abiola well ahead of NRC’s Bashir Tofa. The news had cheered me up at the time despite the harsh conditions we endured living in the middle of the forest right in the heart of Tiv land. I had earlier travelled down to Makurdi to attend Abiola’s campaign in the company of some other ‘hungry corpers’ at High Level Makurdi when SDP came to town, we had gone along merely out of curiosity and boredom, there weren’t much to do back then in the sleepy Makurdi town except laze around in the morning, drink kunu in the afternoon, dance kpingi at night in one of the many dingy night clubs, or go hunting for ‘bush meat’ at Benue State University. Moreover we had hoped for some kind of Abiola windfall, if you had been hungry corpers like we were back then, such expectations wouldn’t be out of place.

Despite our limited understanding of politics at the time, we still went back to our base camp (the Makurdi corpers lodge) singing Abiola’s praises, sure our pockets were not stuffed with some Tafawa Balewas or Obafemi Awolowos but Abiola’s oratory captured our imagination, too bad that our sympathies didn’t really count for much as we didn’t vote in that election, civic duties were not very high on our agenda back then. Our sympathies for Abiola could also have been a pure case of keeping up with the joneses because every other person at the time was rooting for Abiola, there didn’t seem to be any other loveable candidate as Bashir Tofa was not gifted with the garb, was it not natural then that we did the same?

From a distance Abiola’s story fascinated us a lot, his stupendous wealth, his rise from grass to grace, his sartorial taste, his bootylicious exploits, his life story etc. I remember reading that famous interview where he said that it was in his late wife’s (Simbiat) house that he drank his first cup of tea or something along those lines. The pillar of sports in Africa had also captured our interests with his Abiola Babes Football Club and Concord Football Club exploits. You could then imagine our disappointment when Babangida working in concert with his foot soldiers; Arthur Nzeribe and my late cousin, Barrister Clement Akpamgbo (S.A.N) scuttled Abiola’s dreams, and invariably our collective dreams.

That act threw a spanner in the works of Nigeria’s long awaited march towards economic recovery; it would also cost many people of my generation their best productive years. In addition to the already prevailing and rising unemployment, uncertainty and unrest set in in the land leading to the loss of many lives amongst Ndigbo and other southerners who vacated Lagos and other major cities around Nigeria in droves crammed in trucks and buses during the ‘Oso Abiola’ crises. The act engendered mass migration which at some point became the only option for many of us; I ended up in Egypt en route Damascus (Syria) from whence my immigrant journey began. And when it seemed that it was time to go back to the fatherland, being that the thoughts have been knocking on the door for quite some time now amongst Nigeria’s many diasporas, there comes IBB, the one they call the evil genius knocking on the gates of Aso Rock with the other members of the old brigade, the shameless old men and clowns threatening to barge in uninvited.

Babangida is surely a wealthy man, so it may not just be for the money that he is doing this. He still commands clout and loyalty amongst many of Nigeria’s professional politicians who have since made his Minna residence a Mecca for incumbent and wanabe politicians, so he may not be doing it for influence. He seems pretty safe and secure, likewise the Babangida clan in their immediate surroundings (in Nigeria at least), and their businesses continue to flourish so he may not be doing this to protect himself and family’s personal and business interests. Though Nigerians may not have forgiven his government’s eight year waste, they seem to have forgotten up until the announcement of his planned second coming. All the while, Nigerians have let the Babangidas be, they have not gone looking for them to lynch or mob them. They have also not gone to hunt them down or to deliver their heads on a platter; Nigerians have simply carried on with their lives bearing out their fate, but now it seems the old wounds are being re-awakened.

Some people have said that Babangida’s quest is purely a selfish one couched in Machiavellian patriotism. Such commentators argue that Babangida feels that he may have been hounded out of office ‘prematurely’ and was stopped from completing his social engineering project. Some others mischievously allege that he feels cheated that he never really slept in Aso Rock despite building the place, but then were that to be his only problem I’m sure arrangements could be made to bring him and his loving and caring wife Miriam, the fashionable mother of the nation and patroness of rural women over for a couple of nights, did Bill Clinton not do the same at the White House? I’m sure Nigerians wouldn’t mind that at all if that is all it takes for the Babangidas to leave them alone. Some other commentators (mostly IBB loyalists) still maintain that IBB wants to come back and set the records straight and redeem his name at the same time, but I’m thinking, babash. If that was his intention, I would say he is already 21 years too late. 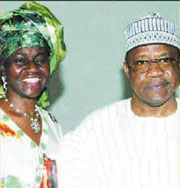 What can IBB offer Nigerians now? Charm and charisma? May be not, I’m sure dozens of the new kids on the block already ooze that; the Donald Dukes, the Chris Okoties and the Pat Utomis. What about Ideas? I don’t think so; Nigerians already know who the ideas men are currently jostling for the top job. A bit of intrigue and evil ingenuity then? Perhaps but we have since overdosed on those, and the world has since moved on since 1985. How about some fashion etiquette? Well, Miriam could have come in handy here but even her role model Imelda Marcos has been busy lately auctioning off her collections. That leaves us with nothing really.

turedness to himself since he has since completed and returned the PDP nomination forms, but from a distance this omen definitely will not blow Nigerians any good, neither will it the gap-toothed one. Some things would have been better left as they are or were and may not require Minna Hill Top oracles interpreting the vote of Nigerian masses, that of no confidence.