Why The Nigeria Railways May Remain Dead!

With the total collapse of the road network in the entire country, Nigerians who anticipated that the recent interest in the railways would provide an alternative will have to wait a very, very long time.

At 78, when he should be happily settled down after his retirement in 1987, Nathaniel Okoro is sadder than sad. In 2002, he helped put in place a 25-year vision that was expected to resuscitate the comatose Nigerian Railways and its corporation. But seven years after he became an essential chip that forged that blueprint, the railways are still ailing. Indeed the Lagos District Terminal, LDT, at Ebutte Metta is now a graveyard for trains. Scores of decaying coaches and locomotives line the premises and residents have resorted to using them as toilets. The rails are spots where most people hang their rungs and rags, but the danger of it all was at Oshodi, where traders converted the periphery of the rail lines to display their wares, until the Lagos state government drove them out recently. Across the country, it is rare to see trains sidle by anymore. A businessman from Portharcourt who did not want his name mentioned told the magazine that he has never set eyes on any functioning train in the city in recent times. ‘Most of us who want to ferry our goods to Lagos and back now use luxury buses. Where else do we turn to – air, sea?’ he asked. Skeletal services take place in Kafanchan and several other train terminals across the country, and recently when Ibrahim Bio, Transport minister hinted that his ministry would acquire 60 new locomotives for the country, Nemadi Sambo, Kaduna State governor, offered to shore up that number with two more. 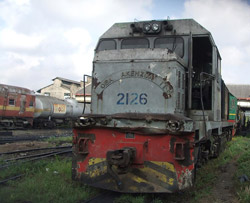 Olusegun Obasanjo, former president, had tried to resuscitate the railways by entering into a contract with China Civil Engineering Construction Company, CCECC, a subsidiary of China Railway Corporation, CRC, to modernize the NRC. That first phase of modernization involving just about 1,315kilometres of the double gauge lines would start from Kajola, Ogun State. Construction work was expected to commence in five other segments as well. These include the 181km from Ibadan to Lagos, the 200km from Ilorin to Ibadan, the 270km from Ilorin to Minna, the 360km stretching from Minna-Abuja-Kaduna, and finally, the 305km from Kaduna to Kano, all of which were to be completed by 2010. But the arrangement was not tidy because there were allegations that Obasanjo did not apply his due process rule in the disbursement of the funds that the Chinese received. What baffles a lot of Nigerians is that even after a donation of N1billion apiece by both parties as soft loan for the project, the Chinese began to complain that their mobilization fee of $250million was not enough. Perhaps unsure of what to do next, the government nibbled at a plan to raise money from the capital market for the project, to execute the second phase extending from Portharcourt to Maiduguri, expected to cost another $9billion.

With the current review of the contract agreement by the Yar’Adua administration, CCECC is now running helter-skelter. This is because after it smirked to the banks with the $250 million it had received upfront, it announced an initial public offering in Hong Kong in a bid to raise $2.3billion to purchase equipment for its overseas projects. It also earmarked another 10 per cent from the proceeds from the $8.3billion from the rail contract for building their own cement plant here in Nigeria. Therefore when word got out that Nigeria had suspended the contract, CCECC shares plunged from 18.5 to 7.99 in Hong Kong dollars. The magazine found out that the railways contract represented more than 14 per cent of the total value of all CRC’s contracts worldwide, as at September 2008.

Deji Eninseyin, a lawyer, believes that before the House of Representatives house committee on lad transport should go ahead to approve another N2.7billion under the 2009 appropriation bill, for the railways, it must ask itself this question: will spending all of that money on the railways impact positively on the economy? ‘However, I think that the government is reluctant to spend that money because of the unpredictable financial climate in the world today’, Eninseyin said. But David Ndakotsu, assistant director, public relations of the NRC, told the magazine that the deal with the Chinese did not involve getting them to introduce any modern method to run the railways. ‘Even though it has dawned on everyone that the economy cannot be uplifted without a functional railway, it would be impossible to get them to run on electricity because of the epileptic nature of power supply’, he said. Presently, Nigeria is unable to generate and distribute up to 1,500 megawatts of electricity. That perhaps informs why some technicians at the running shed at Ebutte Metta who have worked with the NRC for up to 30 years said that it is needless for government to bring in 60 locomotives that it plans to buy soon. They suggest that instead of bringing in those locomotives, government should buy brand new engines that can drive all the nearly dead locomotives on this premises. They said that in the past, government bought locomotives, which could not drive the dead engines on ground.

Trains are not like cars and aeroplanes. They are environmentally friendly. Modern trains run on electricity generated by either solar or atomic energy. They carry tons of goods, and convey passengers through long distances. The economic boom that Nigeria witnessed in the early 60s may not have been possible without the train network that crisscrossed the length and breadth of the country. For most cities in Europe and the Americas, trains are second nature – prime ministers, company executives, business moguls and ordinary people all rely on the train for cheap, fast and efficient transportation. Records show that government lacks the will to revamp the sector. As far back as 1973, the military government of Yakubu Gowon reneged on its plans for the railways. Even though both the second First and second National Development Plans had about $300million allocated to the railways, nothing much was achieved. In fact, government allocation to the sector increased by as much as 87 percent in the Second National Development Plan of the Federal government.

Official corruption is another matter. Available records of a five year financial summary of the NRC reveal that in 1999, the Federal Government allocated as much as N900 million to the NRC and N1billion in 2000. That figure increased to N2billion in 2001, but in the following year, that allocated fell short to the tune of a billion naira only to be increased again to 3billion in 2003. Therefore, in less than five years, the NRC had received close to five billion naira, without commensurate income generated from that huge investment. The interesting thing here was that even though the Nigerian demand for rail service within the past five years increased, there is even stronger focus on roads leading to wear and tear and avoidable road accidents. Some technicians at the EBJ terminal in Ebutte Meta allege that whatever money that the NRC manages to make daily quietly goes into the pockets of corrupt officials manning the corporation. Some of them also allege that there were certain big ogas within the railway who have been bribed not to allow the railways work. ‘If the railway work, naim be say all the petrol tankers no go dey carry fuel and diesel like before’, the source said in pidgin.

Concerned Nigerians want the railways to be privatized to reduce the burden of putting all of the nation’s vehicles on the high ways. But there are obstacles in the way of privatiz

ation of the NRC. Specifically, section 29 of the National Railway Act of 1955, stipulates that the NRC is a state-owned-enterprise, SOE, that cannot be privatized unless certain hurdles are met, like a review of that Act itself. Information from the Bureau of Public Enterprises, BPE, says that the Railway Act 1955 creates an ‘inherent conflict of interest by vesting regulation and the provision of rail services in NRC’. It claims that a proposed reform of the rail sector will repeal the existing Act, separate policy operation and regulation and create a new industry framework for the sector. Irene Chigbue, director general, BPE, told the magazine that the NRC was not among the companies slated for privatization and commercialization by the government. ‘Instead of privatizing, we decided to concession. The decision to concession the NRC was borne out of our plan to avoid a worst case scenario, the collapse and eventual shutdown of a socially and economically viable service to the nation’, she said. Bayo Uzamot, a businessman, said he has no idea what ‘rail concession’ means but he is afraid that if it is ever implemented, it might be by 2050 or 2090 when it may not be useful to most Nigerians.

Nigeria currently has a very weak economy owing to a variety of factors. Inflation is presently at 12.2 percent. Experts say that although Nigeria’s Gross Domestic Product, GDP, has been positive in the last 40 years, government has not exercised the political will to support its growing population by ensuring that the transport and energy sectors work. They also insist that it is foolhardy to use tankers to ferry goods and petroleum products across the country when trains can do it better and cheaper. Gamaliel Onosode, chairman of Zain, a telecommunications company in Nigeria, told the magazine recently that as long as there is no vibrant rail transport, the economy will remain as immobile as the dead trains at the various terminals across the country.