For the man who began an exciting career in broadcasting as a station manager in 1973, journalism has for long been a family passion. “My mum is a journalist,” he tells you. “As Lara Morel, she worked with the then Daily Service, the Daily Times at its Kakawa facilities, and she was editor of Woman’s World. My late uncle, Chief Bisi Onabanjo, former governor of Ogun State, was a journalist. So that might give you an idea of where I was coming from.”

Ekisola developed an interest in broadcasting early in life. He remembers with some nostalgia how in his elementary days he used to read to himself, mimicking the voices of popular on-air personalities of that era.

Eventually, the decision to become a broadcaster wasn’t without some pecuniary motive. Hear him: “I remember that my mum came back from France in 1973, and decided she wasn’t going to stay in the rough and tumble of Lagos. She wanted a quiet place. So she went to Ibadan and ended up at Radio Nigeria, Ibadan where she began presenting a woman’s programme, Homemakers. After my school days, I began work in one of the Federal ministries while my mum was in France. But the pay wasn’t too fantastic. I also wanted to work in the bank, but I couldn’t get in there, even though I had good grades and all that. But then, radio was also paying good salary. That was how I became a studio manager at Radio Nigeria, Ibadan where I met the likes of Yanju Adegbite, where we worked under the late Chief Ishola Folorunsho our then State Controller.”

Another great name he became acquainted with in Ibadan is that world renowned Nigerian writer, the late Amos Tutuola, who earned global acclaim with his classic, The Palmwine Drinkard. 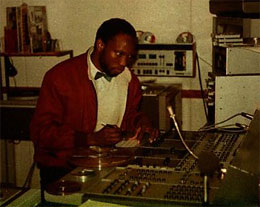 What was the feeling like on his first day on air? “It was wonderful,” he intones. “I remember I recorded it and I would play it back a million times. But after a while, it became a part of you and you wanted more than that. You now started thinking of how to leave something in the hearts of people, something for people to remember you by. Radio Nigeria was a station that instilled discipline in you.”

After the regions were discarded and new states created, government workers were asked to proceed to their home states. Ekisola had to relocate to Abeokuta, capital of Ogun State, where a new radio station had just been started. Initially, though, it wasn’t a trip he really hungered for.

“Although I’m from Ijebu-Ode, I was a Lagos boy, born and buttered in Lagos. Coming to Ibadan was for a reason. Now leaving Ibadan for a totally new place like Abeokuta was going to be earthshaking. It wasn’t a place I would rather go if I had a choice. In fact, I stayed put in Ibadan, working as a freelance presenter. Then one day in Dugbe, I saw Chief Tunde Elegbede who later became the General Manager of OGBC. He called me and said, ‘Sesan, what’s your problem? They are waiting for you in Abeokuta.’ That was how I left.”

Once in Abeokuta, Ekisola discovered that though the ancient rocky refuge of the Egba people wore a rustic face, it wasn’t the outmoded, stone-age village he had anticipated. On the contrary, he discovered a city rich in culture and history, full of sophisticated yet hospitable dwellers. And he fell in love. “On the surface, it wasn’t developed, but it was well-developed culturally, and the people were sophisticated. Remember that at a point, the judiciary was dominated by the Egba people.”

As he speaks, the house phone wouldn’t just stop ringing. He picks it up eventually and speaks briefly into the mouthpiece while you sip your mountain dew. He then explains that he’s hosting friends to a barbecue today, and the calls are from those seeking directions. You peep through the window and the weather outside seems blissful. And as if reading your mind, your host suggests that you relocate to the backyard, where the sun mildly shines upon the well nurtured lawns. The plastic chairs form a circle underneath a canopy on the grasses. A bowl of grapes and cherries sit on the floor. And to your right, a couple of youngsters busy themselves playing tennis.

You ask Ekisola, how, as a young presenter, he was able to cope with fame at that time.

“What the people knew was the name, not the face”, he tells you. “And one thing my mum kept emphasizing to me was that fame is good. But that you have to cherish it, defend it and protect it. Don’t just be jumping all over the place because very soon, you will become a nuisance all over town. So I had that at the back of my mind. I could stand in the market and no one would know who I was. And when my late uncle Chief Onabanjo became the Governor and he was trying to set up Ogun State Television, OGTV, he called me and offered me a position. But I told him I would rather stick with radio,” he says, throwing some cherries into his mouth.

“One thing that gave me away, to some extent, was that I had the only red Volkswagen Beetle in Abeokuta,” he chuckles. “Yes, there was fame all right. My name was everywhere. I had a very popular show. But I wasn’t the only one. There were other great people that I worked with. There were veteran radio and television icons like the late Otunba Yomi Onabolu,Chief Kunle Olasope, and the late Tunji Marquis of WNTV/WNBS fame, Seun Oyefeso, Willy Thomas, the late Felix Femi Fashina, Femi Sowoolu and many unsung but highly productive colleagues like the late S. Ade Ogunnusi. A lot of these names that you hear now, many of them passed through OGBC. People like John Momoh, Lola Fani-Kayode, Dele Alake, Eugenia Abu, Kenny Ogungbe, Peter Okodua, Segun Shy-shy Shyllon, the late Chief Toba Opaleye and many others.” As he mentions Toba, Ekisola’s voice falters, his cheerful brow wearing a melancholic mien. He shakes his head sadly. “May Toba’s soul rest in peace,” he prays. “Toba is someone who modernized the Yoruba language in a way that was fascinating. His shows were absolutely incredible. I went to see him in the hospital earlier in the year when I went home. He had emaciated so badly. I couldn’t believe that was the same Toba that I used to know. May his soul rest in peace.” Amen, you respond.

It’s amazing how this man can swing from mood to mood with considerable ease. “Abeokuta became my home,” he continues. “Up till now, I haven’t even left Abeokuta because most of my stuff is in Abeokuta. I’m accepted in Abeokuta. In fact, a lot of people believe I’m from Abeokuta. I was at an occasion in Washington D

C, and this musician was playing. And as soon as he saw me, he said, Ekisola, their son under the Olumo Rock. So all the Egba high chiefs and the immediate past Alake of Egbaland, they all accepted me as a son.”

Ekisola became head of the newly created OGBC 2 when the F.M. station was carved out of OGBC. “Most of those guys were green at that time. But they took up the challenge. Initially, I was scared. There was Radio Nigeria 2 in Lagos, and then there was Radio Rivers. These were F.M. stations that were all over town at that time. So nobody gave us any chance. But with the dedication of the team, we were able to surpass expectations. Looking back now, I think the location of the station also helped us. Abeokuta was close to all the major cities around, Ibadan, Lagos, Benin. We were able to reach the power brokers.”

Indeed, during the tempestuous days of the June 12 political imbroglio, OGBC 2 became an effective medium for the opposition, eventually resulting in the sealing off of the station by gun-toting policemen sent by then dictator, General Ibrahim Babangida. Reflecting on those turbulent times, Ekisola says the fact that the central figure, late Bashorun MKO Abiola was an Ogun State indigene probably gave an emotional tinge to the June 12 affair. “There was a tremendous emotional attachment to Abiola being a son of the soil. If it was another radio station, maybe nobody would have paid us any attention.”

Looking back, Ekisola says working at OGBC was fun. “We were committed to its success. There were days we would stay in the studio all night. Some times, my wife used to bring my food at 2:00 am. But we didn’t regard it as work. We were simply having fun. And Ogun State radio became a household name all over Nigeria”

Tope Adeboboye writes for Nigeria's King of the Tabloids, Lagos-based The Sun newspapers. A former Senior Correspondent with Saturday Punch, Tope has won a couple of awards, including the prestigious Nigeria Media Merit Award's Features Writer of the Year (2000/2001) and the International Library of Poetry's Editor's Choice Award. He currently lives in the United States.

Ebenezer Obey: I Had My Share Of Drinking And Womanizing

"Nigeria’s future is bright...The country will be better. Good days are ahead. I will just want the government to take care of the Niger Delta...

Ebenezer Obey: I Had My Share Of Drinking And Womanizing

"Nigeria’s future is bright...The country will be better. Good days are ahead. I will just want the government to take care of the Niger Delta...