Adams Oshiomhole As A Metaphor

Since after the April general elections, I have done a lot of soul searching, trying to figure out why we are where we are. Why do Nigerians revel in plumbing the depths of ignominy? Why do we, always, whoop it up and paint the town red with our dishonourable ways? Why does evil triumph so easily in our country?

Why have we chosen, as President Olusegun Obasanjo unabashedly proclaimed to the whole world, recently, a culture of fraud, when other nations are repudiating such devious behaviours?

Why do we give other people cause to talk “rubbish” about us? My answer to all these questions is that evil triumphs in Nigeria because we are too self-centred. We only think about self, nobody cares about the collective. As long as we have enough money to pay hospital bills abroad, the hospitals at home can rot away. As long as we have enough money to send our children to schools abroad, Nigeria’s school system can collapse, for all we care. As long as we are not kept outside the power loop, a Sani Abacha may well be Nigeria’s life president for all we care. 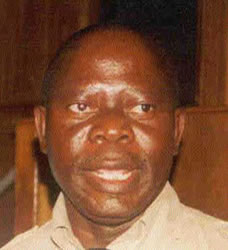 As a people, and at any given time, Nigerians refuse to see the big picture, preferring instead to view the world from very narrow prism. We are so shallow-minded that we only think about today. Nobody pauses to spare a thought for tomorrow.

No country, with citizens that have this kind of mindset, makes any meaningful progress.

But the fact that is lost on us is that whenever we condone evil, for whatever reason, it turns back to haunt us. Those who are in doubt need not look farther than the victims of the fraud that marred the 2007 elections. Most of them, particularly those in Action Congress, were beneficiaries of the 2003 fraud. Then, they were all members of the ruling People’s Democratic Party (PDP), and just as Obasanjo is, presently, calling victims of his sleight of hand names, such people also called victims of their criminality names in 2003.

But the irony is that all of us, even the current beneficiaries of our ‘culture of fraud,’ are potential victims. And Obasanjo, out of power, will sooner than later appreciate the wisdom in the saying that those who sow the wind, cannot, but reap the whirlwind.

After all, the evil that General Ibrahim Babangida did in 1993, when he annulled the presidential election won by his friend, Bashorun MKO Abiola, is haunting him till date. Then, he had the power of life and death, or so it seemed, and used it recklessly, almost to the point of destroying Nigeria. But in 2007, despite his fabled wealth, he is just another Nigerian, whose presidential ambition was so easily frustrated without a whimper from him.

If Babangida had not muddled the political waters in 1993, perhaps, there wouldn’t have been an Obasanjo in 2007, and if he aspired to return to power as a democratically elected president, as he indeed aspired, perhaps his friend, ‘former President Abiola’ would have used his goodwill to make it possible. But Babangida didn’t think about tomorrow.

That same evil seed which Babangida sowed in 1993 nearly consumed all those who watered it, including Obasanjo. Had Obasanjo not lent his considerable political weight in support of the annulment, perhaps Babangida would have had a re-think. But he went to Harare, Zimbabwe, to announce to the world that Abiola, his kinsman, was not the messiah Nigeria needed. Rather than working for the de-annulment of the election and the swearing in of Abiola, he endorsed the Chief Ernest Shonekan-led Interim National Government (INEC).

When eventually the messiah he was looking for came in the person of General Sani Abacha, he nearly paid the supreme price for supporting evil. Others who saw in Abiola’s travails an opportunity to advance their own selfish quests, either politically or economically, by ingratiating themselves with the evil forces then were not so lucky.

That was, obviously, the point Chief Segun Osoba, former governor of Ogun State, who was a victim of the organised fraud that was the 2003 elections, made last Wednesday at the launching of a book written by Mr. Kunle Oyatomi, editor of Sunday Vanguard, and titled, Fingerprints: Nigeria’s Tangled Transition to Nationhood.

Osoba, no doubt, pulled no punches in ensuring that the joke was on Comrade Adams Oshiomhole, former president of the Nigeria Labour Congress (NLC), and the Edo State Action Congress (AC) gubernatorial candidate in the last elections.

Osoba, who was chairman of the occasion, was already making a speech when Oshiomhole came in and he dutifully reminded him of what he said in 2003 and his current stance.

According to a report in last Sunday Vanguard, Osoba, jokingly but poignantly, told the former Labour leader the home truth. “I was talking to somebody when Oshiomhole came in. He is my president, he is my comrade. We are both in AC. But I have not asked him what it is like to be in the same shoes that I wore in 2003. It was my comrade that said, ‘Osoba go to the tribunal, you should forget the election.’ He told me to forget the election. Let Obasanjo be. I would not ask them to forget the election. But I am asking Adams what it feels to be given out by our friend, President Obasanjo.”

It is a pity that Osoba’s point was lost on Oshiomhole as evidenced in his response. Hear him: “Let me state that whatever I said in 2003, I stand by it. I believe that in 2003, like I have argued in my statement, I said so. Now I did not ask Nigerians to take up cutlass. I am going to the tribunal … If anything I am a proud loser. I am ashamed for those who are involved in this robbery … I believe Nigeria is in trouble. I want to assure you that I am not regretting anything. I stand by what I said in 2003.”

But the question Oshiomhole refused to answer was whether what happened last month is different from what happened in 2003. He believes Nigeria is in trouble today because he has been denied the people’s mandate, but the country was not in trouble when others were denied the same mandate in 2003. Who asked Oshiomhole to carry cutlass in 2003? Was that the interpretation he gave Buhari’s call for mass action then, a call he poured cold water in his capacity as NLC president? If mass action equates carrying cutlass, how different is it from the one he initiated in Benin, Edo State capital, through his ‘road work’?

Is Oshiomhole implying that by condemning the fraud that marred the 2007 elections, the Nigerian Bar Association (NBA) president, Olisa Agbakoba, is asking Nigerians to take up cutlasses? Granted, Agbakoba’s principled stance may not change the political status quo, which Obasanjo has foisted on us, but it goes a long way in showing that as a people we are repulsed by evil. And the more prominent Nigerians there are who could speak out against evil, the more likely it is that one day, we will be able to pull down the ramparts of deceit that has been used to hedge in our progress.

Of course, Oshiomhole dare not answer a question on what has changed between 2003 and now although he knows the answer too well. What has changed is his self-interest. In 2003, he was a politician of a different hue. It served his interest then to use the Labour movement to stabilise a government that had no legitimacy, and he did that, not because he had the interest of Nigeria at heart, but because he wanted to ingratiate himself with the powers that be.

Oshiomhole only joined the AC because the door of PDP was shut in his face. If he had been allowed, as he desired, to contest under PDP, he would still be telling those who were defrauded today to forget the election and let Obasanjo be.

But this is not about Oshiomhole. I am only using him here as a metaphor for our short-sightedness.

The point is that every man reaps whatever he sows. It is the law of retributive justice. And as it is with individuals, so it is with nations. A nation that is not repulsed by evil cannot make progress. Unfortunately, we have Oshiomhole in all of us. And that is why we are, exactly, where we are.

I chuckle when people give the impression that Obasanjo’s exit will make things better. But how can that be? Truth be told, the outcome of the April elections has only one implication and it is a grave one. We have sowed the wind by handing over the levers of power to those who owe allegiance, not to us as a people or to Nigeria as a country, but to the forces of retrogression that dot the nooks and crannies of the country. We will reap the whirlwind bountifully, sooner than later.