Death of A Husband

It is one of the greatest misfortunes that can befall a woman at any point in her life – to loose her husband. No matter the length of time she spent with him in matrimony, the grief and sorrow she experiences cannot be quantified. It is an eternal loss; and so, no matter how much we try to console or encourage the truth is, she has lost her soul-mate. All we can do is give her time. For it is only time, as they say, that heals all. It is vital that she finds the right support – morally and otherwise from relatives, friends and loved ones so that she can see her way through this mournful period. Unfortunately, more often than not the reverse is usually the case.

In different parts of the world, irrespective of religion, tradition and culture, widows are victims of violence and oppression at the hands of close family members and so-called friends, especially their in-laws. The story below clearly illustrates my thoughts on this matter. The characters and locations are real.

Personally, I believe that my father allowed himself to be the sacrificial lamb for my sake. It was as if he was communicating from his grave and saying, “Here my eldest daughter… Chinwe, take it… this is your breakthrough in your course to support the widows of Nigeria… For my sake your voice and desire will be heard and accepted finally by our people,” and if I tire in this campaign through my poetry and writings, then I have disgraced my father’s memory. This is the only way I can appease my father’s soul.

So I ask this question – Do widows deserve to have their human rights stripped from them and violated when their husbands die?

My father, Mr. Wisdom Azubuike died on the 8th of August 2006, aged 60yrs and was to be buried on the 24th of August 2006. He died seated while on duty at work. He was thought to be asleep on duty, but instead, he was dead…(he was a security guard at the Apapa Branch of Intercontinental Bank PLC in Lagos, Nigeria). Autopsy result stated he had suffered a sudden attack of ‘Hypertension’, because he did not know that his blood pressure had been rising for quite some time.

My mother, my siblings and my father’s elder brother, Mr.Christian Azubuike, along with other family friends accompanied the corpse to our village on the 23rd August 2006 following the wake-keep that was held on the night of the 22nd August in Festac Town, Lagos. Before leaving for the village, my father’s brothers, had collected eighty thousand naira, (the whole money) which was given to the family by the Bank, as support for any expenses incurred on the burial arrangements. His brothers said it was the fee that was to be paid to perform some burial rites for the corpse and also prepare things such as refreshments, etc for the reception of guests after the burial. My recently widowed mother was left penniless. Regardless, they heartlessly demanded for more but for the fact that she and my younger brother scolded them and argued the fact that there was no more money left to give. 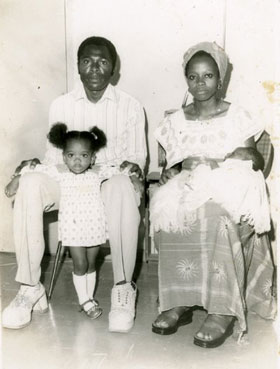 On the night of the 23rd when my family arrived at the village, at our compound my Uncle, Christian suddenly and surprisingly ran into occupy the family house, (just a 2 bedroom bungalow-like house, which was owned by my late Grandparents) with his other brother, Leonard and their children, and my Aunt Mrs Rozaline – stating that my father had no house of his own therefore they would take over the bungalow. In this way my mother and her family were not even given any welcome or a place to lay their heads for the night. They actually rested in the coastal bus (donated to them by the Bank as means of transportation) and slept without food or bathing. Betrayal is an ugly word, especially in the context of family.

Chinwe Azubuike, a young female contemporary voice from Africa, runs a campaign worldwide against the victimisation and deprivation of human rights of the Widow in Nigeria. This issue is extremely personal, born out of her own bitter experiences when her father sadly passed away late last year. She has written extensively on the subject with essays and poetry and intends to return to Nigeria to create a documentary about the Death of a Husband. Her website.

Chinwe Azubuike, a young female contemporary voice from Africa, runs a campaign worldwide against the victimisation and deprivation of human rights of the Widow in Nigeria. This issue is extremely personal, born out of her own bitter experiences when her father sadly passed away late last year. She has written extensively on the subject with essays and poetry and intends to return to Nigeria to create a documentary about the Death of a Husband. Her website.