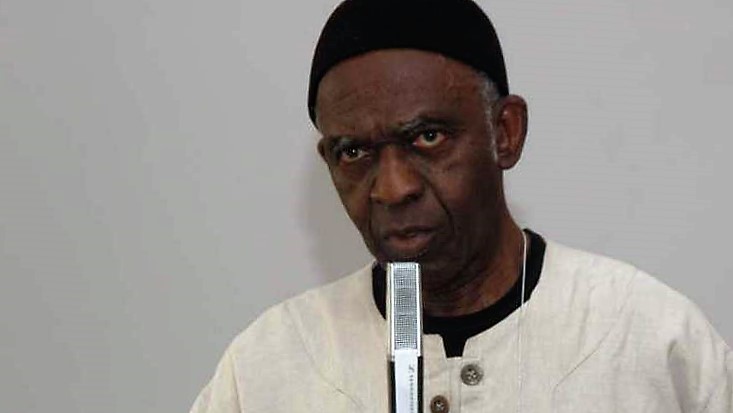 Last Friday, my wife and I traveled from New York City to Canton, upstate New York State, the location of St. Lawrence University. We were fortunate to be invited to take part in a series of events to celebrate fifty years of Obiora Udechukwu’s extraordinary artistic career.

Udechukwu is primarily an artist—one whose output over five decades has been at once prodigious and consistently outstanding. Yet, to characterize his profession in the way I have just done is, I fear, to obscure the nature and scope of his intellectual and creative engagements. For, as I told the audience at St. Lawrence, the man is a Renaissance in the broadest sense of that word, a scholar whose versatility is evident in his work as a painter, poet, and scholar both of art history and literature. One of the marvelous treats of the celebration was to hear two of the poets read from Udechukwu’s book, “What the Madman Said,” a poetic collection of startling images and crystalline lines.

The events themselves—a retrospective exhibit of Udechukwu’s outstanding work; an impressive keynote lecture by Chika Okeke-Agulu, Udechukwu’s former student who now teaches at Princeton; readings by several poets and novelists; and a traditional Igbo dance—were affecting and elegantly achieved, each event an orchestration of Udechukwu’s stature as a giant in the field of visual arts, a man of penetrating insight and reach. Yet, remarkable as they were, the formal events seemed to me far from the most meaningful aspect of the celebration.

What moved me more was the way in which the celebration of Udechukwu’s work became an occasion for those of us gathered at St. Lawrence University to reflect on the drama of Nigeria’s desultory odyssey.

There was something instructive—I could say even magical—about the gathering. You could gauge the celebrant’s mettle by the number and quality of people who turned out to honor him. There were his former students, some of the most skilled artists and art scholars of their age: among them, Tayo Adenaike, Olu Oguibe, and Chika Okeke-Agulu. Adenaike happened to be visiting the US, and eagerly accepted Udechukwu’s invitation to come for the celebration. In fact, he arrived a few days early to give talks to Udechukwu’s art students.

The poet, Uche Nduka, spoke with palpable joy about the delight of seeing some of his friends for the first time in more than twenty years. Ijele Anozie, another of Udechukwu’s former students, traveled with her son and daughter from Dallas, TX, to perform a traditional dance. Nduka Otiono, like me an admirer of Udechukwu’s work as a scholar, artist and social conscience, drove with his wife from Ottawa, Canada to moderate the evening of readings in honor of the celebrant. Akin Adesokan, a novelist, poet and professor of comparative literature at Indiana University, focused on Udechukwu’s personal magnificence, his legendary generosity, his insistence on treating everybody with gracious consideration. Moments after we arrived at the guesthouse where we stayed, my wife and I got a taste of the specialness of the man Udechukwu. An American woman, who lived next door to the guesthouse, engaged us in conversation. On learning we were in town for the university’s celebration of Udechukwu’s work, she voiced her admiration for the man. She had graduated from St. Lawrence University, a science student, but she had talked to Udechukwu just before she traveled to Kenya for research work. She remarked on his warmth, the ease of his person.

Speaker after speaker testified to how powerfully Udechukwu’s work as artist, scholar and teacher shaped their own development as artist, scholar or teacher. They also pointed to the celebrant’s moral courage, his distaste for injustice, and his stubborn fidelity to noble principles even in the face of threats from power-drunk and diabolical forces. His academic career in Nigeria was marked by his struggles against overreaching, amoral power. Such battles leave scars, including the truncation of his otherwise stellar academic career at UNN.

Udechukwu first came to St. Lawrence University twenty years ago. The original plan was that he would spend a year or two as a visiting professor and then return to his post at the University of Nigeria Nsukka. It was a time of considerable upheaval in Nigeria’s academe. At the time, General Sani Abacha was at the helm, doing his best to misrule Nigeria. The dictator had little use for academics and their dogon turenchi (their penchant for long-winded language). To curb academics’ excesses and teach them who was in charge, the general appointed a sole administrator to run UNN.

Udechukwu and other likeminded professors resisted the effort to reduce their university to the equivalent of a barracks, a space where scholars first and foremost called to obedience. Under the military ethos, scholarly activities were viewed with suspicion, and scholars who nursed notions of operating without hindrance were particularly targeted. Udechukwu was one of the most visible of these resisters.

Of course, the military and their minions were in no mood to countenance dissent. Udechukwu and a few of his colleagues were arrested on trumped up charges, and charged before a tribunal.

This absurd ordeal was playing out in his life when St. Lawrence sought him out to assume a visiting professorship. It is one of those sad stories that recur in Nigeria: a narrative of mediocrities hounding some of the country’s noblest citizens and most enlightened minds—chasing them, as it were, into the embrace of countries that recognize and celebrate talent and accomplishment.

Despite the heroic effort of some academics, there’s no question that Nigerian universities and other tertiary institutions are today a shadow of their former selves. The reason for that disheartening state of affairs is rather complex, a subject that demands more than the space of this column. But I have no doubt that a central part of the story has to do with what happened to Professor Udechukwu and others like him.

As we spoke and sang and danced last week in honor of Udechukwu, I could not shake off from my mind this sense of a shadow hovering ever so obliquely over this moment of exultation. What did it mean that a major American university would for twenty years treasure a man that the forces that run—and ruin—Nigeria were in a haste to cast away? Let’s forget for the moment Udechukwu’s stalwart accomplishments as an artist, poet and scholar. I propose that we look, instead, at the extraordinary profile of the students he once mentored at Nsukka—Adenaike, Oguibe, Okeke-Agulu. Imagine all the Okeke-Agulus, Oguibes and Adenaikes lost to Nigeria, a country deeply hostile to excellence, wedded to the veneration of the vilest among its citizens.

For me, the ultimate takeaway from taking part in, witnessing, the adulation of Udechukwu was this: that the last word belongs, not to the greedy ones who make a fetish of conspicuous consumption, but to men and women of honor and talent who labor every day to enrich their fellows, to make the world a more beautiful place. Through his visual art, poetry, scholarship and social engagements, Udechukwu has inspired countless people. I salute an essential scholar, a graceful and dignified human: Obiora nwa Udechukwu!