“There are many ways to die…but you must now find a way to live” – Ene Oloja in the movie, ‘The Brave One’, 2007 by director Neil Jordan.

Yes! The cream of Nigerian drama and arts has finally arrived on the big stage! Hollywood gets a taste of our very own Ene Oloja. Remember her? In the 80’s and 90’s she was the buxom beauty who starred as Zamaye in Cock Crow at Dawn and later played the sister to the late MacArthur Fom (of the Nosa fame) in Behind the Clouds, both rested but timeless Nigeria Television Authority drama serials of repute.

Having decided to see a random movie this past weekend, I did not deliberately go in search of this doyen of Nigerian acting. Her name was not even listed in the opening credits as we generally settled in at the cinema to what proved to be an edge-of-the-seat story. Then she appeared. As she delivered her lines, at first in a strange Americanized African accent, I laughed knowingly, saying to my friend, “This lady must be Nigerian”. As the movie progressed, she eventually came into her own and demonstrated the experience and confidence which made many families sit tight before their television sets every week NTA aired those nostalgic shows. While she looked oddly familiar, I still could not recall where I had seen those piercing eyes and arched eyebrows before. As the closing credits rolled past, the name Ene Oloja suddenly hit me. Struck with awe, I unconsciously found myself clapping aloud, celebrating a uniquely wonderful Nigerian actress. 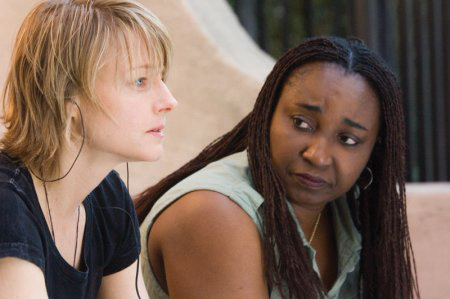 This 2007 action thriller, The Brave One, cast’s Ene Oloja alongside Jodie Foster (the Oscar Award winning actress in Silence of the Lambs). Her character, Udo Josai, is Erica Bain’s (Jodie Foster) African immigrant neighbor who first becomes a friend and eventually a confidant to Erica, a troubled radio show host. This deeply riveting drama tells the story of a young couple who have their dreams shattered by a brutal and mindless attack. The tragic turn of events see Erica losing her self esteem, identity and will to survive. In the resulting numbness, she turns to law enforcement for help and reassurance but is let down by the lethargic approach of ‘New York’s finest’. In a desperate bid to cling to life, her fear leads her to cross that point when ordinarily harmless people become cold savages. This transition redefines her persona and launches her character on a path of gruesome vigilante activities which transcend her personal loss and attempt to correct the perceived evils of society. Enter Ene Oloja, who in her characteristic authoritative style, through her character, Udo, boldly but lovingly confronts this wrecking-ball of a woman, reminding her of the thin line between right and wrong; between light and the dark side.

In the ensuing scenes, Udo (portrayed as a survivor of genocide) provides an anchor to a wounded soul who has become like a rudderless ship lost at sea. Reminiscent of her NTA days, Ene comfortingly delivers one of the most powerful lines in the movie, “There are many ways to die…but you must now find a way to live”. When Erica confides to Udo that she has killed a man, Ene’s acting shines through here. She doesn’t appear shocked. Identifying with Erica’s pain, she draws from her own tragic past, referring to the evil of child soldiers in her war-torn country somewhere in Africa (not Nigeria), where “guns are placed in the hands of kids to kill their mothers.” The dark themes explored in this movie throw up serious moral questions which make society search its very soul. In the movie, Ene underlines the message that evil can neither be combated with evil nor hatred with similar hatred. While this movie nearly falls into the trap of portraying violence as a legitimate response to injustice, the viewer is reminded however subtly that jungle justice is not a worthy solution and only makes the avenger as bad as the criminal.

Relating this to the violence and corruption which are rife in Nigeria and many parts of the world, the typical reaction is to either become numb and unfeeling and do nothing or rise up in anger and take matters into our own hands in the quest for justice. Nigerians can identify with Erica’s seemingly frustrating position. Looters appear to get away with their ill-gotten wealth while screaming the new mantra, ‘Rule of Law’, and brandishing get-out-of-jail cards from a compromised and confused law enforcement system. We throw our hands up in exasperation when those tasked with making laws for the benefit of our nation, have their hands soiled in filthy lucre and yet when confronted shout, ‘This is a party affair!”. In such circumstances, one is almost tempted to secretly salute the dark and unthinkable heroics of the character, Erica Bain, as she tackles the shady establishment of the underworld. Our leaders should be reminded that power and wealth is transient.

Ene Oloja migrated to the United States in 1991 and her career has been largely quiet since 1993 when with other professionals, she staged a theatre production titled, ‘Echoes from the Diaspora’, telling a powerful story of the experiences of immigrants of color in the West. She reminds us in this movie that she is not a spent force exiled in the land of artistic obscurity. What stands out for me (and I could be wrong) is that to the best of my knowledge, she is the first made-and-branded-in-Nigeria actress to be cast alongside an Oscar Award winner. I will not fail to recognize the many other hard working professionals of Nigerian origin like Chiwetel Ejiofor (‘Inside Man’, 2006, alongside Denzel Washington), Sophie Okonedo (‘Hotel Rwanda’, 2004, alongside Don Cheadle) and others like them who ply their trade in Hollywood. These people make us proud as a nation and are beacons for the local Nigerian film industry (Nollywood) which has taken the West by storm. The likes of Ene Oloja who were forerunners of the booming Nigerian film industry, could play a bridge-building role by drawing the attention of Hollywood to the abounding talent of Nigerian theatre practitioners and film professionals.

Interestingly, I searched popular internet sites for film reviews for ‘The Brave One’ but none even so much as mentioned Ene Oloja in the cast. Well…if no one chooses to celebrate this brilliant Nigerian actress, I will! Great work Ene! We hope to see you deliver even greater and more central performances on your chosen stage. 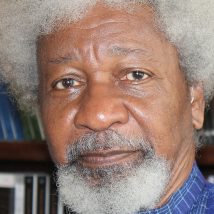