Osuofia In London: A Philosophical Perspective

David Hume a German philosopher once wrote, “I am apt to suspect the Negroes, and in general all the other species of men to be naturally inferior to Whites. There never was a civilized nation of any complexion than White.” As we continue to ponder on this quote, we become more knowledgeable about the place of the African in the mindset of the European or the American. The major argument the colonialists advanced for African colonization was to civilize the uncivilized Africans. Africans today, in the thinking of the West, should be grateful for the impact of colonialism which helped in their civilization. A simple research would show that though colonialism seems to have moved Africa forward, it actually took Africa backward. For Africans who have traveled to Europe and America, they are very familiar with questions such as, are there computers in Africa? Do Africans live in houses? Do people drive cars in Africa? Do Africans have toilets at home? Do Africans wear clothes? Is Africa one big country or village? As ridiculous as these questions may sound, Africans abroad are daily confronted with these questions.

An average American thinks the whole world ends within the boundaries of the United States and is very ignorant of the African continent. Most Europeans and Americans still have the knowledge of Africa depicted in the racial shows of the 60’s. This image has not been helped by foreign charitable and religious organizations working in Africa who continue to present Africa in a bad light to the West in order to gain financial support for their humanitarian work in Africa. It is thus the place of Africans to legitimately defend her identity and seek equality for Africans with the rest of the world. Thus, writes Thabo Mbeki, “This generation remains African and carries with it a historic pride which compels it to seek a place for Africans equal to all other people of our common universe.”

From very humble beginnings, the Nigerian movie industry is growing daily and the attention of the world is drawn to movies produced in Nigeria. Today, you can easily buy Nigerian movies over the internet and in stores in Europe and America. Suffice me to state that my attention was drawn to the comedy “Osuofia in London” by an American friend who wanted more clarifications about the message of the movie. I have argued in some of my previous articles that Africans in general and Nigerians in particular must avail themselves of the modern means of communication in promoting African identity and culture. Black people all over the world are looked down on because of their identity and the false mentality that the black culture is inferior. Through our movies, we are forming the mindset of our audience to a certain understanding. Nigerian movies have always been characterized by marital problems, rituals, crime, and religion. These are problems that plague the Nigerian society. Many producers have been able to offer positive messages from these problems through their movies. These producers must be thanked for the lessons they are putting out for people to learn.

There is a danger to argue that the message of a movie does not really matter if the movie is a fiction. True fiction is based on some reality. The opposite of this would be false fiction. The fictional comedy “Osuofia in London” is unpatriotic to Africa. The movie portrays Osuofia as being more interested in the brother’s wealth rather than the brother himself. Africans are presented in this movie as timid and uncivilized people who have no idea of what it means to use a rest room, a confirmation of what the West believe already about Africans. Mr. Okafor the London based solicitor of Donatus is seen as a corrupt man, another Euro-American image of Africans. Osuofia is portrayed as a dumb idiot who would sign off every of his brother’s property for a kiss from a white lady. To show the producer’s willingness to sell this false African identity to the West, the movie is produced with a Western audience in mind. This is seen clearly in the narrations before and at the end of the movie.

The African of the 21st Century deserves a better image than this. For the Western audience that has watched this movie or will watch it, it is my submission that the “Below Average” African is not as dumb and stupid as the movie wants to make people believe. Most African people today are as civilized as their western counterparts. For the African audience, let us continue to promote our identity as Africans and show Africa in the light of truth to the rest of the world. 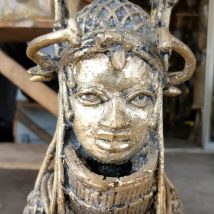