Pope Francis: A Beacon of Hope and Peace for Humanity 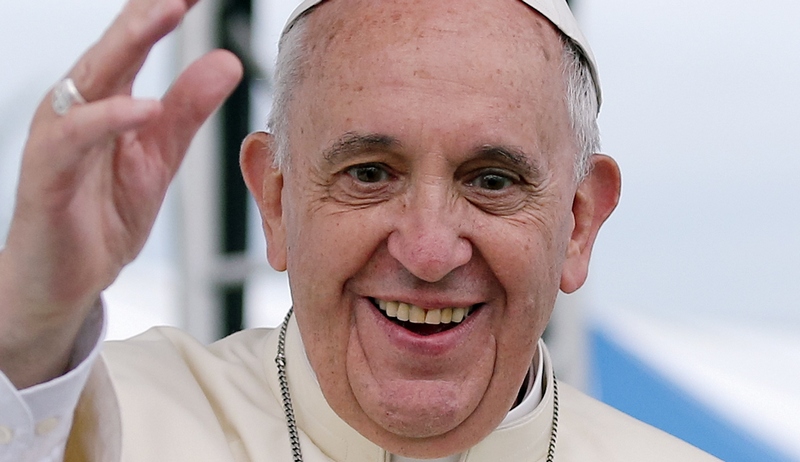 The beacon of hope of our time is Pope Francis, our beatitude! He is a quintessential individual shaping a confused world for posterity, good governance and revival of souls for the good of mankind. Pope Francis is our icon of inspiration. A peaceful man who understands the language of peace and defines peace as a panacea to world’s upheavals.
I love and adore the Pope for his venerability. Pope Francis is my man of the year because he is all encompassing. I have been following this holy man from the inception of his papacy. His decorum and disposition to the vulnerable people around the world is worth mirroring. His Holiness, Pope Francis epitomizes the hope of humanity. He is well read, intelligent, astute and all-inclusive in his papacy and sacred assignments to humanity.

Pope Francis is a man you will love with passion if you have instinctual muse. Pope Francis is changing the face of religion in the world, just like President Obama, Pope Francis is redefining war as ineffective tool or solution to retractable religious and political differences in the world.
One cannot but agree with this gentle man’s massages of hope and peace to the warring factions in some troubled regions in the world. He preaches peace in time of war; displays tolerance in time of divisiveness; and blazes a trail in diplomacy in time of political argy-bargy. He is making history and history is on his side. His Holiness is equipped with a compendium of knowledge of the odd world. Pope Francis possesses so many characteristics in common with some leaders who have shaped the world positively. These characteristics include humility, respect and candor. All these attributes are the true litmus test of a great leader.
The moral persona of Pope Francis is another milestone in the history of Christendom and an example to other world religions. Pope Francis speaks regularly to the conscience of the world. He is a great optimist who believes there is much hope for humanity. His messages of hope, compassion, moral and good governance cut across religious and political lines. He has an unquenchable passion and desire for everyone to live in a more peaceful world.
Some people were moved to tears with Pope Francis’s ex-cathedral message to all Christians, and to the strong-minded people to have respect and compassion for repented sinners; to stop excommunication and seek forgiveness for those who had abortions and love to the same sex couple who are fighting for equality with others in the society. Pope Francis sees humanity in us before our religious nuances and drawbacks.
Pope Francis seeks for forgiveness of all, just like Jesus Christ did to sinners. With tolerant people like the new Pope, who has tolerance and understanding of the misunderstood people, the world will be a better place for all. As a Muslim, with my cognizance look at Pope Francis’s spiritual persona and humane dispositions since his ordination, his extemporaneous pronouncements and speeches are resonating in the minds of people across the world. His courteous background defines his personality. Pope Francis moonlighted as a nightclub bouncer before he became God’s enforcer. He is a compassionate human being who understands sinners more than the sinners. He also understands the poor more than they understand themselves.
The refreshing revelations about Pope Francis’s humble beginnings and past added to his reputation as an everyman’s Pope who has turned down many of the luxuries and symbolic ephemerals, traditionally entitled to pontiffs. He is the antithesis of our ostentatious everyday lives. He believes his security rests squarely in the sacred hands of God and the poor.
His Holiness, Pope Francis’s messages of peace should rekindle hope to the troubled world in this period of human adversity. We are witnessing the human catastrophe in the Middle East, the dehumanized exodus of innocent children and hapless men and women fleeing a war-torn Syria to neighboring countries; the North Korean threats to her neighbors and the Iranian government’s recalcitrance to nuclear disarmament. Under the Treaty on Non-proliferation of Nuclear Weapons, the Pope and President Obama’s candor to reach amicable but crucial agreement on the deals on Iran’s enrichment is commendable. Through the deals, enrichment has been limited to the development of research, production and use of nuclear energy for peaceful purposes without threats to Iran’s neighbors, member states and the world. Obama’s Iranian deals should be accommodated but with the stance warning to Iran against developing nuclear weapons. Pope Francis and President Obama should be encouraged to maintain their historic peaceful messages to a world in turmoil.
Pope Francis was a buffer, mediator and very instrumental to the revamped and historic diplomatic relations of the United States and Cuba. A relationship that has been in bedlam for more than five decades. The new relationship will surely be mutually beneficial to the two countries.
In a world where war is lorded and violence is romanticized, Obama’s administration has made negotiation the most intrusive instrument to control outbreak of war and non-proliferation of nuclear weapons in the history of mankind. Obama and Pope are children of history. While Obama signals providential president of the United States of America, Pope Francis epitomizes a godsend as elixir to a disquieting world. President Obama and Pope Francis, the unscathed personae are avoiding the burdens of history. History is definitely on the side of these two individuals as they seek peace instead of war in a beleaguered world.