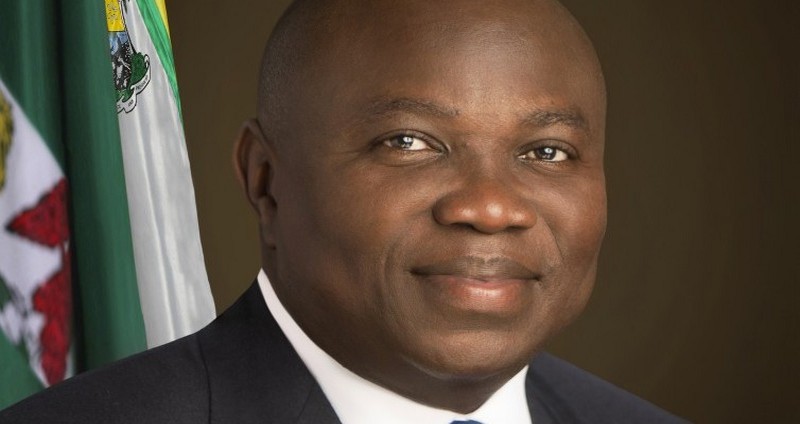 Nigerian politics is a funny amphitheater of absurdity. It would have been the funniest comedy skit, if not that it is dangerously toying with the lives and destiny of over 200 million people, in the most populous black nation on earth.

As the curtains to this amphitheater opened a bit, we all saw a man bleating like a goat in some fatal emergency! The man‘s eyes were bulging as he battled for political air.

The camera zoomed in.

And we all saw it!

Tinubu was and is still holding,  and applying undue pressure on Ambode‘s scrotal sacs.

Ambode is bleating like a he-goat, that is about to be castrated!

One can understand Ambode’s heartrending screams. Where Tinubu was holding him is not a place where anyone could hold a man and expect him to laugh!

Many have been wondering: what is Tinubu‘s business with Ambode’s scrotum!

Your guess is as good as mine!

Mr. Bola Tinubu was a former governor of Lagos State. He has been in politics like forever. He rose through the NADECO ranks, and eventually crowned himself, like all of them, one of the troubles with Nigeria.

While governor in Lagos, the most financially buoyant state in Nigeria, Tinubu created structures of feudalism, originating from him and ending in his bank accounts. He convoked a personality cult around himself; conscripted men of low morality, who desired power, groomed them as his Orwellian Napoleon dogs, compromised their consciences and sat down to deploy them as his political godsons. He lobotomized all of them, and infused in them all, cranial fluids that rewrote their ability to do independent thinking. He became their puppet master. And they became beholden to him. This got to the extent that Tinubu became the unseen hand manipulating the pendulum of political destiny of the Yoruba nation in modern times.

In the realms of Nigeria politics, we have seen such men before. Ibrahim Badamosi Babangida was such a man. He corrupted people ad nauseam, before tying them to his apron-strings. Till date, even in his debility; he still controls some idiotic politicians across Nigeria; from his Wheel-chair at his hilltop mansion in Minna, built by Julius Berger; that subsidiary of Germany‘s Bilfinger-Berger, that has being a wayfarer of almost all the corrupt governments that ever afflicted Nigeria with their nihilistic pestilence of primeval thievery and corruption. They still go on a homage-paying pilgrimage to him, to secure the support and blessings of this eminent scoundrel and thief, who sodomized Nigeria without vaseline between 1985 and 1993.

Another such man, was Lamidi Adedibu. This man was a consummate thug, who understood the politics of “stomach infrastructure”, and used it to good effect, holding sway and exerting influence over southwestern politics in his day, until the days breathed on him and the shadows fled!

Adedibu is resting with his ancestors!

Tinubu is a polished neo-imperial incarnation of Lamidi Adedibu; the self-proclaimed Garrison Commander of Ibadan politics. Unlike Adedibu, Tinubu is a refined thug. Where Adedibu deployed raw power of the streets, Tinubu plays the soft-speaking Godfather, who speaks gently, but carries a big stick, and political razor-blades, to castrate any of the moral eunuchs, and court jesters, swarming around him for a whiff of power; who once granted his fealty, decides to grow his own balls.

To be Tinubu’s mandarin, is not an easy task. It is tantamount to self abnegation. You abjure your ability to think, strip yourself of all agency, and become a thoroughgoing paladin; a glorified slave to Jagaban’s whims and caprices. It is to to become ball-less. It is to become a eunuch for the sake of his Kingdom of power.

To that end, whenever any of these retinue of eunuchs beholden to the Jagaban, thinks that the power he enjoys, issues from the power of his achievements or station; and becomes emboldened to challenge the ordinances of this August emperor; the Jagaban is swift in his judgement and reaction. He is like the Sword of Damocles. He would not only swing to decapitate you. He would place your scrotum in a vice and command your political castration.

Tinubu colonized Lagos as the private estates of his avarice. He cornered all the juicy parts of Lagos. He became the Jagaban. He crowned himself the Cesar of Lagos, before whom anyone who desires a part, would have to „lift up Olympus“

With time, his true imperial desires began to manifest. He was a man of vaulting ambition. Lagos  soon became too small, for his avaricious tastes. He decided to go for the big prize. The center. He like other knaves and rogues that have tasted Nigerian power, wanted to colonize the Central treasury. That is where money and power is. But to do that, he must hand Lagos over to a trusted slave. He first gave it Fashola. Fashola did his bidding and was, like a faithful servant rewarded with a higher position schemed out by his principal. When Fashola’s charge was done, he sought a new servant.

One thing with avarice, is that it possesses an ontological insatiability that defies reason, and leads only to the portals of wretchedness, once the gods pulling the chariots of your luck, decide to abandon you.

But before he set his eyes on Abuja, he decided to choose one of his faithful servants to look after his estate for him. This man must have qualifications in servility that is drooling in its sycophancy, and beholden only to his august majesty, the Jagaban. Fashola had those. He did his job well to the puppet-master’s satisfaction.

A new man need to be auditioned for the role that Fashola was vacating.

He appointed Ambode a Mandarin, to superintend his estate for him, while he goes to impregnate Buhari, to give birth to a Nigeria that will also double as his personal fiefdom.

While he was away, at least in his considerations, Ambode, his slave grew some balls, and started constituting himself a hurdle to his master’s wishes and desires for Lagos State.

That nuisance so much angered the Jagaban that he swore to show this stiff-necked slave, that “no matter how long and stout the human neck; that on top of it must always sit a head”

The Jagaban, a man not to be outdone in intrigue, decided that those balls need to be castrated. He desired to show Ambode that what he was growing were not balls, but genital elephantiasis. And that needs to be perforated.

That is why the Jagaban is holding Ambode‘s scrotum in his hands. And Ambode has been screaming, flailing and bleating like a he-goat that is about to be castrated.