It prides itself as King of tabloids which is a euphemism for sensational reporting. The mission statement reads” to practice journalism in the classical tabloid newspaper tradition of presenting the news and features in an exciting style, with impact, objectivity and appeal that generate returns to all stakeholders: the society, the investors and the practitioners. Welcome to the world of Sun newspaper. But forget the mission statement above, the newspaper in the last three years has thrown its avowed mission statement into the gutters of biased reporting, partisan columnists and the absurd.

That the Sun Newspaper is a tabloid newspaper is in no doubt but the biased reporting of issues and its hatred for the fight against corruption is well known to discerning readers. The newspaper and its editors are anti people and do not practice journalism according to the ethics of the profession. 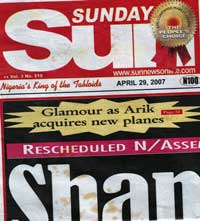 I was indeed one of the die hard readers of the newspaper. I was particularly impressed by the grassroots and investigating reporting and its coverage of the many ills done to workers through casualisation by some Nigerian Asian companies. The editors of sun newspapers really provided fresh and new method of reporting that was different from the other established mainstream newspapers in . The weekend newspaper was also a refreshing package of news report, articles and magazines. The Spectator pullout is still a crowd puller.

But all these changed as soon as the publisher of the newspaper entered politics and became enmeshed in corruption. Then the editors threw away their mission statement above and resorted to gutter journalism. It became worse when their non performing publisher who after spending eight years as the governor of Abia state with nothing to show for it was indicted with corruption charges.

Then they went haywire. Throwing everything at the anti corruption agencies. The editors are now always eager to prove that Governor Orji Uzor Kalu is innocent. Why won’t they wait till the court adjudicates on the case? Hardly a day passes without us readers having to face one obscene report on the travails of the former governor publisher of the newspaper. It is really obscene. The Sun Newspaper has degenerated into a gutter newspaper, throwing tantrums, using fowl language and headlines to kick against the imaginary enemies of their publisher or sing his praises to high heaven.

I was in recently and also did a tour of some local government in the state. I was indeed saddened by the fact that Orji Uzor Kalu actually ruled the state for eight years. The level of rot was unimaginable. Piles of refuse every where, potholes ridden roads (even the inner city roads), thuggery, armed robbery, brigandage were the order of the day. Then I wonder why these journalists that write in the newspaper will not speak the truth. Is it because the man is their publisher? It is indeed shameful. You can indeed see the faces of the resident of the city, forlorn looking, having been traumatized for eight years under the Kalu’s administration. Yet the editors will sing his praises to high heaven.

Journalists should always speak the truth no matter who the piper dictating the tune is. My concern now is the constant EFCC bashing that has become the hallmark of the paper. Hardly a day passes without one screaming headline or the other about EFCC and Nuhu Ribadu. The editors of the Sun need to find other vocation rather than result to this propaganda that will not help their case and that of their Chairman. Discerning Nigerians would soon see beyond this gutter journalism the sun editors have resulted to.

The activities of their columnists have riled me and other Nigerians to the point of puking. Apart from their poor opinion and language they have often engage in the sinister vocation of turning the truth on its head. They are partisan. Unfortunately, this they do with amateurish relish.

I have enough and absolute respect for the men and women that write for the paper. But the truth must be told. The editor of that newspaper should do a proper stock taking and re-direct the focus of the paper from the current biased views which it now propagates in the name of defending their publisher from the corruption charges that have been leveled against him. The case is court.

The Sun Newspapaper no doubt has thoroughbred professionals. The list is awesome. From the award winning Shola Oshunkeye (the CNN African Journalist of the Year) to Mike Awoyinfa and Dimgba Igwe.These are people who have made their marks in the treacherous journalism profession in . Why would they want to throw all their achievement away for a pot of porridge? Why are they defending the indefensible? Let them be told that they may run the risk of loosing their readership soon. Nigerians are beginning to see through their gimmicks. What they are doing is a great disservice to the Nigerian people.

I will conclude this piece with a caveat for the editors of the newspaper. A word is enough for the wise. The present cash and carry journalism will not help the paper. Journalism must be practiced to help bring our country from its present state of corruption to the one in which the rights of the citizens are respected. Corruption destroys a country and its people.

Why protect one man just because he gave you a voice through the establishment of a newspaper? Is that why you must mortgage the entire readership and feed them with lies, half truth and blackmail? What is currently going on in the paper is share blackmail against the anti-corruption agencies all in the name of protecting the owner of the newspaper. This grossly unfair if the truth must be told. I stand corrected on this.

journalism is fast becoming a cash and carry venture with cash and carry reporters, paid columnists and Ghana-Must-Go editors. All well meaning Nigerians must condemn this but unfortunately they do not have a voice at present. The crooked few in the name of some journalists continue to exploit their opportunity to kill popular opinion. I appeal to these set of editors and journalists to please stay on the side of the people. God Bless . 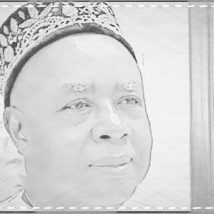